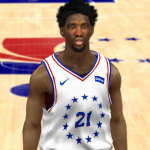 Other updates in V62 include new coach faces (Atlanta and Phoenix), fixed player contracts, and the latest rotations. The recently unveiled City and Earned uniforms have also been added, courtesy of Pepis. The Elite roster is still in the pipeline, and updates to the current season roster will continue in the new year.