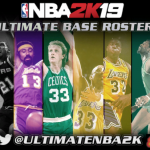 The comeback is complete! After a three year hiatus, HAWK23 and company have released V40 of the Ultimate Base Roster for NBA 2K14. The new version adds rosters for the last few seasons, and includes an update for the current offseason, accurate as of July 4th 2018. Some of the key features include:

V40 of the Ultimate Base Roster also features several art updates including faces, portraits, and much more. The news stories at the beginning of the first year in Association mode have even been updated to reflect the results of the 2018 season, and LeBron James signing with the Los Angeles Lakers. Download it here, and check out the release topic here.

While there are no further updates for the NBA 2K12 version of the Ultimate Base Roster at this time, it is readily available once again as HAWK23 has updated the download links. Please see our earlier bulletin for more information.