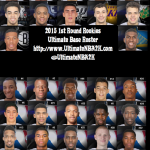 HAWK23 has pushed out V36 of the Ultimate Base Roster for NBA 2K14 PC, which fixes a crash in Association Mode that was occurring at the end of the first and third quarters. New artwork and updated offseason rosters have also been added; a full breakdown of the key features of UBR V36 is as follows:

Download the Ultimate Base Roster for NBA 2K14 here! Be sure to check out the release thread for more information, previews and support, as well as Like the official UBR Facebook page.