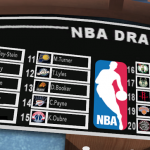 Download the Ultimate Base Roster for NBA 2K14 here! Be sure to check out the release thread for more information, previews and support, as well as Like the official UBR Facebook page.