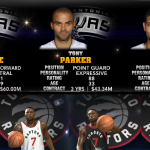 HAWK23 has released V39 of the best roster pack around, the Ultimate Base Roster for NBA 2K14 PC! As you may have seen on social media, HAWK23 has been releasing minor updates on a daily basis, adding all of the latest offseason transactions. V39 is a major release however, with the following key updates:

Download the Ultimate Base Roster for NBA 2K14 here! Be sure to check out the release thread for more information, previews and support, as well as Like the official UBR Facebook page. Keep checking back for the regular incremental updates to the rosters throughout the offseason, and stay tuned for bulletins on all the major releases!

i cant load the roster