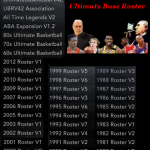 The Ultimate Base Roster for NBA 2K12 PC is still going strong, as HAWK23 has now made V42 available. In addition to updating the current 2012/2013 season rosters through the trade deadline, the latest release includes several big improvements to some of the retro season mods, new art files and various fixes. Here is a rundown of the key features of V42:

You can find the Ultimate Base Roster here in our Downloads section. For more previews, information and support, or just to thank HAWK23 and his team for all their efforts, check out the release thread here.