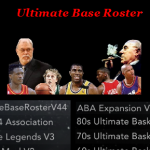 HAWK23 has released V44 of the Ultimate Base Roster, featuring 33 complete season mods from 1980 through to 2013, including up to date rosters for the 2012/2013 season. The latest release also includes plenty of extras along with some fixes and newly added art updates. A complete rundown of V44’s key features is as follows:

Download it here! Also be sure to check out the release thread for additional previews, information and support, or just to offer some thanks to HAWK23 and his crew.

hey man.. why cant i download any of the Ultimate Base Roster mod? please help.. i really want this mod..

HAWK23 is currently working on getting the files back up after some issues with his host. More details can be found in the release thread.