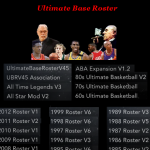 HAWK23 has just released a new version of the Ultimate Base Roster for the PC version of NBA 2K12. UBR V45, which currently includes rosters for 33 seasons from 1980 through to the present, features new art files, various updates and fixes, and current rosters accurate as of March 26th, 2013. A rundown of the key features of the latest release is as follows:

Download the Ultimate Base Roster here. For more info, previews and support, or just to say thanks, check out the release thread here.

Why can I not edit the players

Please direct any questions to HAWK23 in the release thread. You’ll also find FAQs and troubleshooting information there which help out with common issues.