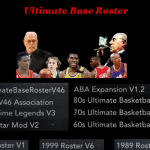 HAWK23 has released V46 of the Ultimate Base Roster for NBA 2K12 PC. In addition to bringing the 2012/2013 season rosters up to date as of April 1st, it includes new versions of several retro season mods, new art updates including retro courts and faces, new Draft classes and an assortment of fixes. Want to know more? Here are the key features of V46:

Sound good? Then pick it up here in our Downloads section! Also be sure to check out the release thread where you can find additional previews, FAQs and support, as well as send along your thanks to HAWK23 and his crew.