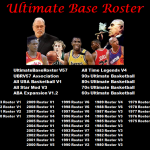 HAWK23 and the rest of the guys behind the Ultimate Base Roster are far from done, as they have just released V57 of the amazing mod for NBA 2K12 PC. The latest release contains 39 full season mods, up to date 2013 offseason rosters, new art files and an assortment of further tweaks and fixes. A full rundown of the key features of V57 is as follows:

Download V57 of the Ultimate Base Roster here! For more information, previews and support, or just to say thanks and check out what’s coming in future updates, visit the release thread here in the NLSC Forum.