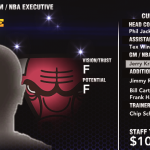 HAWK23 has released a new version (V76) of the Ultimate Base Roster for NBA 2K14! It’s one of the biggest updates in the history of the mod, so if you haven’t been keeping up with any of the recent releases, you’ll definitely want to check this one out.

In addition to updated 2023 season rosters, the new version of UBR enhances its complete retro season mods with year-specific dornas. There’s now no need to manually switch the dorna files, as the correct ones will be used whenever you load a roster. There are also new shoe vaults, with all of the shoes being categorised by decade and listed with their real names.

On top of that, there are new player faces and stadiums, along with various fixes. A full breakdown of the changes can be found below. Download the latest version of the Ultimate Base Roster for NBA 2K14 PC here, and check out the release topic here in the Forum for further information and previews!