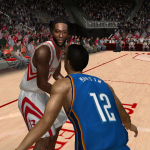 Since the 2012/2013 NBA season is now underway, I thought I’d address the situation with the new roster updates for NBA Live 2005, NBA Live 06, NBA Live 07 and NBA Live 08 PC. First of all, yes, my intention is to get new updates out for those games, with the new rookies and all the other offseason transactions. While I was hoping I would be able to get the update out by opening night that isn’t going to be possible, however I am aiming to get them out by the end of November. Please understand that that’s as specific as I can be at this time and while I don’t anticipate delaying the rosters beyond that point, certain other responsibilities must take priority.

The upside to the later release is that it will allow me to ensure that there are more art updates ready to be included in the new rosters, as folks are still working on some courts, jerseys and faces for this season. It’ll also give me a few weeks of games to base the rotations on and tune ratings for the rookies, as I’ll have had an opportunity to see how they perform at the NBA level. In other words, the rosters should be much more accurate right off the bat.

In the meantime, I’ll probably release some small updates, such as a logo patch for the Charlotte Bobcats and a new version of Real Staff for NBA Live 06-08. If you’d like to help out with art for the rosters, once again the priority is courts, jerseys and some faces, along with conversions of art updates for NBA Live 2005 and NBA Live 06 (art files for 07 and 08 are interchangeable). Keep an eye on the Forum for an updated list of required art patches, coming soon.

Thanks again to everyone for your patience, support and understanding. Once again I ask that you please don’t pester me about the updates; I realise that the folks still playing those games are keen for new rosters but they are a bit of a chore at times and being hounded about them doesn’t help me get them out any quicker. Most folks have been very good about not bugging me about the rosters, which I definitely appreciate. Thank you once again, please stay tuned for more updates and if you can lend a hand with some art patches, please let me know!

Just got my electricity back since last monday. Hearing the NBA Live 08 roster will be updated just made today more important than Christmas!

So pleased to get the news about the roster NBA-Live 07. I’ve played it for ten years.

thanks and best regards andrew,I love you

my dear,where is the upgrade?
please sent the download link to my email ,xukeniu@163.com

…it’s not available yet. Please read the entire news post for the details.

I’m so sorry,”While I was hoping I would be able to get the update out by opening night that isn’t going to be possible, however I am aiming to get them out by the end of November” I will always waiting for you,thanks my friend

Great, Andrew, you are always the best

Appreciate the kind words, not to mention the court updates. 🙂

Just read the post Andrew, take your time man. Knowing your past works, you’re a perfectionist, which is another way of saying “You’re the man!” Keep up the great work, oh yeah! =)

Thanks for the kind words! I certainly would rather take that extra time to make sure I can pay more attention to detail, so everyone’s support, patience and understanding is definitely appreciated. 🙂

As per the article, by the end of November.

thank you very much andrew

this patch when uptade ?

When it’s ready and not a moment sooner. As per the bulletin, please do not pester me about the release of the updates.