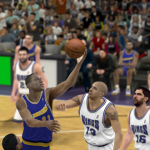 This is Wayback Wednesday, your midweek blast from the past! In this feature, we dig into the archives, look back at the history of basketball gaming, and indulge in some nostalgia. Check in every Wednesday for retrospectives and other features on older versions of NBA Live, NBA 2K, and old school basketball video games in general. You’ll also find old NLSC editorials re-published with added commentary, and other flashback content. This week, I’m taking a look back at the 1991 Golden State Warriors and 2002 Sacramento Kings in NBA 2K12.

As I discussed in a previous Wayback Wednesday retrospective, the success of the Jordan Challenge in NBA 2K11 and the looming lockout in 2011 gave Visual Concepts plenty of incentive to expand upon the historical content in the game. The result of course was NBA’s Greatest, which cut down on the specifics of the challenges (just win the games), but provided us with a larger roster of historical teams and NBA Legends. Deciding to take things one step further, 2K also provided basketball gamers with a couple of other historical teams to play with: the 1991 Golden State Warriors, and the 2002 Sacramento Kings.

Given the popularity and reputation of those two teams, the announcement of their inclusion was greeted with enthusiasm. However, their presence in the game wasn’t without controversy. Let’s take a look back…way back…

Although the ’91 Warriors and ’02 Kings joined the expanding roster of retro teams in NBA 2K12, there was a catch. They were not available by default, and had to be unlocked via a single-use code that was inserted into a limited number of retail copies for PlayStation 3 and Xbox 360. As such, they technically weren’t a pre-order bonus or exclusive, but they certainly offered an incentive to pre-order, since supply was limited and your chances of getting a copy with a code dwindled if you waited to pick one up. As for the PC version, it didn’t matter whether you pre-ordered the game, or picked up one of the first copies to hit store shelves; it had no unlock code. Needless to say, gamers who wanted to play with those teams weren’t happy about missing out. Some PS3 and 360 gamers were able to buy codes off eBay, since not everyone who snagged a copy with the unlock code was interested in using it. Of course, it was all too easy to pay a premium for those codes. Ironically, PC gamers – originally seemingly left out completely – had an easier solution available to them. Both teams and all their assets were actually included in the PC version, and could be accessed by either modifying the settings file to unlock everything, or changing their team type in a saved roster file once the new version of REDitor was released.

What made them appealing additions? The 1991 Golden State Warriors featured the high scoring trio of Tim Hardaway, Mitch Richmond, and Chris Mullin. Together, they were known as Run TMC, the nickname being an obvious play on Run-D.M.C. The ’91 season was their best campaign, as they each scored over 20 points per game, leading the Warriors to a 44-38 record and the second round of the NBA Playoffs, where they lost in five games to the Los Angeles Lakers. It also turned out to be the trio’s swansong; although the Warriors won 55 games in 1992, Richmond was traded to Sacramento on the first day of the season, for third overall pick Billy Owens.

As for the 2002 Sacramento Kings, if you were following the NBA early last decade, they probably need no introduction. With a starting five of Chris Webber, Peja Stojakovic, Vlade Divac, Mike Bibby, and Doug Christie, and a solid bench that included Bobby Jackson and Hedo Turkoglu, they were not only one of the most fun teams to watch, but also seemed poised to threaten the dominance of the Los Angeles Lakers, led by Shaquille O’Neal and Kobe Bryant. The two teams squared off in the 2002 Western Conference Finals, which turned out to be one of the most controversial Playoff series in NBA history. After that, the Kings were never the same.

Since both teams were known for their offensive firepower and boasted lineups with multiple star players, they were an excellent choice to further expand the roster of historical teams in NBA 2K12…even if it did take a little work to play with them. On top of having strong lineups that are fun to play with, there’s an element of “What If?” for both teams, which greatly adds to their appeal. On a personal note, although you might think that I’d favour the ’91 Warriors, seeing as though they’re the team from the 90s, I actually hold more affection for the ’02 Kings, thanks to the memorable experience I had with them in NBA Live 2002. Although only the ’91 Warriors remain in the game today, both teams were a significant addition that clearly influenced future releases. Most of the historical teams featured in NBA 2K11 and NBA 2K12 were NBA Champions, NBA Finalists, squads featuring some of the greatest players in league history, and other noteworthy teams that had some significance in the Jordan Challenge or NBA’s Greatest modes. It’s fair to suggest that the ’91 Warriors and ’02 Kings helped pave the way for the inclusion of teams that were memorable in their own right, but not historically great; teams like the ’00 Raptors, ’04 Timberwolves, ’03 Mavericks, and ’08 Rockets.

Unfortunately, the decision to offer the Run TMC Warriors and Webber-led Kings as an incentive to pre-order also paved the way for 2K Sports to hold back content in future games. After including the entire 1992 Dream Team as a once-off addition to the selection of historical teams in NBA 2K13, the legendary squad finally returned in NBA 2K17, this time as a pre-order exclusive. It’s an unfortunate trend that’s lacking in goodwill, especially when a majority of gamers do buy the latest NBA 2K game every year. It would be great if 2K abandoned this practice and included any new retro teams out of the box, but pre-order bonuses likely aren’t going anywhere.

All the same, the ’91 Warriors and ’02 Kings were a memorable and commendable addition to NBA 2K12. While they should have been readily available to everyone – perhaps as bonus unlockables, once the rest of NBA’s Greatest had been completed – they were an early example of 2K’s willingness to think outside the box when adding historical teams. Likeness rights are always going to be an issue, but I hope at some point we do see even more of those teams make their way into the game…preferably out of the box, and available to everyone.