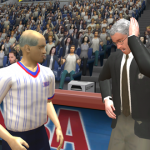 As I mentioned in my retrospective of the game, NBA Live 2003 was the first release in the NBA Live series to feature real coaches on the sidelines. It may seem like a trivial thing these days, but back then, it was a big deal to finally get that kind of detail in basketball video games. Of course, when we look back on a game like NBA Live 2003, it not only provides a snapshot of what basketball gaming was like at the time, but also serves as a time capsule of the real NBA. Fire up the game today, and you might find yourself saying “I remember him!”, or “I forgot he played for them!”

Needless to say, the same goes for coaches. Looking back at the coaches roaming the sidelines in the default rosters of NBA Live 2003, there are some familiar names, and a couple of others who probably haven’t been in the consciousness of most NBA fans for some time. As such, I thought it might be fun to see how the sidelines have changed since head coaches first appeared in NBA Live. Let’s take a look back…way back…

Of the 29 coaches in NBA Live 2003, only five currently have a head coaching gig: Gregg Popovich, Rick Carlisle, Doc Rivers, Nate McMillan and Alvin Gentry. Of those five, only Popovich is still with the same team, as he’s now in his twenty-first season at the helm of the San Antonio Spurs. Meanwhile, Doc Rivers was still in his first head coaching gig with the Orlando Magic, and Alvin Gentry was coaching the Los Angeles Clippers. Rick Carlisle was coaching the Detroit Pistons, while Nate McMillan was coaching the team he played his entire career for: the Seattle Supersonics. While they may not currently be coaching in the NBA, some of the other coaches in NBA Live 2003 aren’t too far removed from the sidelines. George Karl, then the coach of the Milwaukee Bucks, spent last season with the Sacramento Kings, and is currently in the news due to the forthcoming release of his tell-all book. Byron Scott, who coached the Los Angeles Lakers through Kobe Bryant’s final season, was coaching the New Jersey Nets. In fact, led by NBA Live 2003 cover player Jason Kidd, the Nets would make the NBA Finals for the second straight season, where they ultimately lost to fellow former ABA team the Spurs, in six games.

Rick Adelman and the late Flip Saunders were in the game, coaching the Sacramento Kings and Minnesota Timberwolves respectively. Maurice Cheeks, currently an assistant with the Oklahoma City Thunder, was at his first stop as an NBA head coach, the Portland Trail Blazers. Bill Cartwright (Chicago Bulls) and Isiah Thomas (Indiana Pacers) were two other former players turned head coaches in the 2003 season. Phil Jackson was in his first stint with the Los Angeles Lakers, while Pat Riley was also in his first run coaching the Miami Heat. Both are of course still around in executive roles with the New York Knicks and Heat respectively.

Other big names include Rudy Tomjanovich (Houston Rockets) and Don Nelson (Dallas Mavericks). Rudy T left the sidelines behind in 2005 when he stepped down from the Los Angeles Lakers, while Don Nelson’s last season coaching came in 2010 with the Golden State Warriors; Stephen Curry’s rookie year. Speaking of legendary coaches, Jerry Sloan still helmed the Utah Jazz in NBA Live 2003 (and would do so through to the 2011 season), and Larry Brown was in the game as the coach of the Philadelphia 76ers. Lenny Wilkens, second all-time in coaching victories, was the Toronto Raptors’ coach at the time.

While names like John Lucas (Cleveland Cavaliers), Paul Silas (New Orleans Hornets), Doug Collins (Washington Wizards), Don Chaney (New York Knicks) and Jim O’Brien (Boston Celtics) may sound familiar, a couple of others probably won’t. Jeff Bzdelik is currently an assistant in Houston, but his tenure as head coach of the Denver Nuggets was fairly short. Eric Musselman (Golden State Warriors) has been out of the league for a decade, and Frank Johnson (Phoenix Suns) even longer. Sidney Lowe (Memphis Grizzlies) was fired eight games into the 2003 season, and Lon Kruger (Atlanta Hawks) didn’t last much longer before getting canned. While we’re delving into trivia, four current NBA head coaches were actually active players in NBA Live 2003. In addition to cover player Jason Kidd, Fred Hoiberg, Earl Watson, and Steve Kerr (in his final season with the San Antonio Spurs) were still in the league at the time the game was released. Luke Walton, meanwhile, was still in college when NBA Live 2003 came out. Drafted thirty-second overall in 2003, Walton would make his debut in NBA Live 2004.

There’s certainly been a lot of turnover in the coaching ranks in the past fourteen years. As I also mentioned, a couple of coaches in NBA Live 2003 didn’t even last the entire 2003 season. It’s been interesting to see coaches come and ago, and former players eventually making the transition to the sidelines. And then there’s that one constant: Gregg Popovich. For all the changes in basketball video games over the past decade or so, the only one that EA Sports and Visual Concepts have had to make with him is to give him a better face texture as technology has allowed it.

Some big names leaving the sidelines there but some of the little known also still have jobs as assistances if memory serves.

Yeah some of them are still around, in some cases returning after a long absence from the NBA.