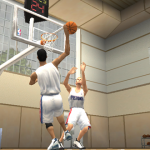 The next game that I’ll be looking back on as part of our ongoing (and belated) 20th Anniversary of NBA Live celebrations is NBA Live 2004. It’s one of my all-time favourite games in the series, and a title that I know a lot of other long-time basketball gamers also remember fondly. As I’ll discuss in my forthcoming retrospective, NBA Live 2004 did a great job in correcting course after NBA Live 2003 was skewed too much towards a casual style, with more realistic gameplay and the inclusion of sliders for the first time in the NBA Live series.

If there’s one thing that most people remember about NBA Live 2004 though, it’s the cutscenes in the newly rebranded Dynasty Mode. Whereas reactions to the “Courtside Comedy” cutscenes in NBA Live 2003 were mixed at best, it seemed like most of us felt that the Dynasty Cutscenes really added to the atmosphere, bringing life to events that were taking place in the menus. Given that it’s such a memorable part of the game, I thought I’d talk a little bit about it, ahead of my full NBA Live 2004 retrospective.

After receiving minimal attention through a couple of iterations of NBA Live, Franchise Mode was revamped and rebranded into Dynasty Mode in NBA Live 2004. The mode was enhanced with features such as the ability to trade draft picks, training to aid in player development, and trade interest indicators. It’s obviously quite primitive compared to MyLEAGUE and MyGM, or even NBA Live 16’s Dynasty Mode in many aspects, but it was one of the first significant steps forward since Franchise Mode was added in NBA Live 2000. These features were accompanied by more immersive presentation, in the form of Dynasty Cutscenes.

As you can see in that preview trailer, there were cutscenes for a variety of scenarios. NBA Live 2004 didn’t feature the ability to actively participate in drills, but through the cutscenes, you could watch your players running through them. Trading for a player triggered a scene in which they entered the locker room, where they were greeted by two of the top rated players on the team. Your Draft picks were shown reacting and walking on stage to be greeted by David Stern. Retiring players were seen leaving the locker room, receiving congratulations from one of the team’s top players. Finally, award winners accepted their trophies at a press conference.

That basically covers all of the Dynasty Cutscenes that were in NBA Live 2004. With that in mind, if you’re a younger basketball gamer, you may be wondering what the fuss is all about. Likewise, if you’re an older basketball gamer who remembers NBA Live 2004, you may be wondering why we were ever excited about those cutscenes in the first place. After all, there aren’t a whole lot of them, and there’s no variation to them, aside from the players and coaches involved. At the time however, they were definitely something that was shiny and new. It was fun to actually see a visual representation of what was previously just text on the screen.

As I mentioned before, Dynasty Cutscenes were close to being universally well-received by basketball gamers. The comedic cutscenes in NBA Live 2003 were hit and miss, and are often remembered for their infamy and absurdity rather than being a positive aspect of the game. NBA Live 2004 took a more serious and realistic tone with its in-game cutscenes, and the Dynasty Mode scenes were also considered to be a welcome enhancement to the atmosphere and overall presentation. They could be skipped if desired, but they were fairly brief anyway, and I don’t remember many people expressing a particular dislike of them.

Despite the positive reactions, Dynasty Cutscenes have not been featured in any NBA Live games since. It’s a testament to their popularity and impact on basketball gamers that the addition of such cutscenes is a suggestion that has come up on many Wishlists in the years following NBA Live 2004. Not surprisingly, if you take a look at the comments on the video I posted above, you’ll see a few people wishing that the feature would return. There are some more important changes and additions that need to be made to NBA Live’s Dynasty Mode moving forward, but as far as the presentation elements are concerned, I’d definitely like to see them return. For me, they stand as an effective use of cutscenes in the basketball gaming experience. They reflected the results and events of a Dynasty game, adding some life to the mode and the story that was being told through our individual experiences. If they were being done today, there would need to be more scenes, and they’d probably also need to be somewhat dynamic or varied to avoid becoming too repetitive. Even as they are, though, I’d suggest that those old Dynasty Cutscenes could still spice up moments that could stand to be more than just a text notification.

As it stands, they remain a memorable feature in one of the best games in the NBA Live series. They may not have the production values of the MyCAREER cutscenes or authentic player interviews in recent NBA 2K games, and NBA Live 2004’s graphics in general are obviously very dated at this juncture, but back then, I’d say that we were rightfully impressed by Dynasty Cutscenes. Their enduring popularity and impact on the experience despite their simplicity suggests that bringing them back in future games wouldn’t be such a bad idea.