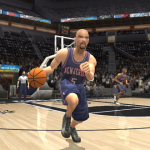 The first couple of weeks of free agency tend to be the most exciting part of the offseason. Twenty years ago, Shaquille O’Neal departed the Orlando Magic for the Los Angeles Lakers, signing one of the first $100 million dollar contracts. Six years ago, it was LeBron James’ turn to shock the basketball world, when he took his talents to South Beach. Just this week, Kevin Durant has just stirred up a mix of excitement and controversy with his announcement that he’ll join the Golden State Warriors. Of course, we’ve been able to make our own shocking signings in video games since Franchise Mode in NBA Live 2000, which became Dynasty Mode in NBA Live 2004.

Speaking of NBA Live 2004’s Dynasty Mode, it featured a couple of quirks when it came to free agency. While the mode added some nifty features that its predecessor lacked, it was afflicted by a couple of issues that did detract from the experience…or enhanced it, depending on how much you cared about realism and challenge. Thankfully, those issues were resolved in NBA Live 2005, but while we were all still playing NBA Live 2004, they were something that Dynasty gamers would consistently encounter.

Which issues am I referring to? Well, let’s take a look back…way back…

The first incarnation of Dynasty Mode added the ability to trade draft picks, an interest meter that indicated how willing CPU teams were to acquire your players, and other management options that expanded upon what was on offer in Franchise Mode. A lot of us enjoyed the new and improved mode, but there were definitely some problems under the hood, particularly with the free agency logic. The main issue was that a lot of top free agents tended not to re-sign with their current teams during the Re-Sign Players phase of the offseason. As a result, there were a couple of distinct problems with free agency. First of all, it wasn’t exactly realistic. It’s not that marquee free agents don’t look to change teams – as the 2016 offseason has certainly demonstrated – but it happened a bit too often in NBA Live 2004. Whether the problem lay with the player logic, or the AI that determined whether CPU teams would offer new contracts to their own free agents, the number of players who decided not to re-sign was definitely higher than it should’ve been, year-to-year. The bigger problem, however, was that when the Sign Free Agents phase of the offseason rolled around, they remained unsigned.

That meant that a lot of stars and notable role players would sit in the free agent pool, instead of latching on with a team. It was definitely an AI issue; even if you edited the salary cap file for the PC version so that all teams had more than enough cap space, those players would still remain unsigned. As such, not only were major players leaving their teams too often, they weren’t signing on elsewhere either, essentially removing them from the league. Unless you wanted to pretend that stars were leaving the NBA in droves, it was something that you’d have to fix manually.

Fortunately, there was an easy fix at the user’s disposal. If players made it through the offseason without being re-signed or signing with a new team, they were available in the free agent pool to be signed for a one year, minimum contract. Therefore, it was possible for the user to sign basically anyone, regardless of their rating, and then trade them back to their former team, or a new team if desired. Since they were signed to minimum contracts, stars could easily be sent back to their former teams in exchange for benchwarmers, in particular generated second round rookies. If you took a little time after each offseason, you could fix up the league without too much trouble.

That is, if you wanted to. Since it was possible to snap up a bunch of high rated free agents on minimum contracts, there was a shortcut to building a super team. You didn’t even have to clear cap space and convince players to accept less than their market value, as the Miami Heat did in 2010. Stars that missed the boat during the offseason readily signed for the minimum, so all you needed was enough roster space to sign all the free agents you wanted. Long before Pat Riley worked his magic with LeBron and Chris Bosh, and more than a decade before Durant broke the hearts of Oklahoma City Thunder fans, it could be accomplished in NBA Live 2004. Personally, I’d suggest that it was an idea that was more fun on paper than it was in execution. Sure, it worked; you could assemble your team of All-Stars, and win a lot of games as a result. However, it removed a lot of the challenge from Dynasty Mode, and teams that are too stacked often aren’t as fun to play with as you might think. From game to game, you’re just blowing out the CPU, and trying to get playing time and numbers for everyone on the roster. With a lot of the big names on the one team, marquee match-ups are scarcer, and the virtual league feels very watered down. Assembling the team is fun, but the fun stops once you get to the gameplay.

In my NBA Live 2004 Dynasty with the Chicago Bulls, I was tempted to bolster my roster with a bunch of stars, but I ultimately opted to fix the league in the 2004 offseason. I’d already upset the balance a little by managing to trade Jalen Rose, Marcus Fizer, and Roger Mason Jr. for Kevin Garnett, leading to a 64-18 regular season and the NBA Championship in my first year. Having tried the super team approach in other Dynasty games, and in the Franchise and Season modes of previous titles, I can safely say that for me, it would’ve only detracted from the experience.

As I said before, NBA Live 2005’s Dynasty Mode saw a lot of the quirks with free agency logic ironed out…for the most part. It also introduced real salaries, which made it a little tougher to fix any issues when they did arise. Still, they were welcome improvements and fixes. Even though Dynasty Mode was still enjoyable in NBA Live 2004, and the workaround for the free agency bugs was easy enough to perform, it wasn’t exactly ideal having to worry about that issue. Unless, of course, you wanted to have your own version of The Decision, before The Decision was even a thing. In that case, it might have been one of the best bugs in the history of basketball video games.