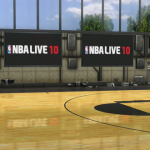 Since I took a look back at The Temple in NBA Live 06 and NBA Live 07 last week, I thought that for week’s Wayback Wednesday, I’d reminisce about The Hangar in NBA Live 10. While The Hangar wasn’t as quite as revolutionary as The Temple – it was a continuation of the same concept, after all – it was nevertheless one of NBA Live’s most memorable practice arenas. It was a pretty cool design to say the least, and it also included a few nifty features that I remembered when I recently fired up NBA Live 10 on Xbox 360 to test out my new capture card.

The Hangar is certainly one of my favourite practice arenas in the NBA Live series, so join me as I take a look back…way back.

After going for a futuristic aesthetic with The Temple in NBA Live 06 and NBA Live 07, and more straightforward NBA-themed practice arenas in NBA Live 08 and NBA Live 09, the development team opted to do something a little different with NBA Live 10’s practice court. The aim was to design the ultimate player practice facility, and much inspiration was drawn from Nike’s commercial celebrating the 25th anniversary of the Nike Air Force 1. This concept resulted in a spacious practice arena that somewhat resembled an airplane hangar, which ended up giving the facility its name. When you load up NBA Live 10 and advance past the title screen, you’ll catch a couple of quick glimpses of Dwyane Wade, Kobe Bryant, and cover player Dwight Howard shooting around in The Hangar. Howard glances over his shoulder and notices LeBron James walking onto the court, with The King announcing his presence with a loud and enthusiastic “Yo!” Howard greets LeBron, and then a shootaround begins before the main menu has appeared, much the same as in previous games. Pop-ups begin to walk you through the basic controls and menu options, and also pushed through news and announcements while the game’s servers were active.

In contrast to the previous approach of beginning the shootaround with a lone player, or the members of your chosen team, The Hangar features pre-set groups of NBA players, with the ability to switch between players by pressing the pass button. In addition to the aforementioned Howard, LeBron, Wade, and Kobe, the group that appears upon starting the game includes Chris Paul, Carmelo Anthony, Amar’e Stoudemire, and Brandon Roy. Upon exiting game modes or Play Now games, other groups of players will appear on the court. Closer inspection will reveal that the different groups share a common bond, such as Draft class, shoe brand, and so on.

The players you’re not controlling will continue to shoot around, so expect to have your shots collide with one another! Big screens on the walls of the gym display clips of in-game highlights (including both a set of default clips and any replays that you’ve saved), and also streamed ESPN content during the 2010 season. It’s also possible to quickly enter a cinema mode and watch videos in full screen. As with The Temple, it’s possible to keep shooting around while a Play Now game is loading, although you can no longer switch between players at this point.

While the inability to select a specific player as in previous games could arguably be seen as a drawback, the idea of shooting around with set groups of stars and other significant players had a lot of merit. Combined with the instructional pop-ups, it was an effective way of learning the basic controls and getting a feel for the game, and the groups tended to provide a good cross-section of the league. It was also something a little different, and having alternating groups of players certainly helped keep things fresh as well. I don’t recall too many complaints about the concept when NBA Live 10 came out. It also helped that The Hangar’s design was awesome. The simple black court design, the spacious hangar-like interior, the big screens, the benches and other equipment on the sidelines, the subtle industrial theme with the fans and exposed girders…it was a great look. It really did have the feel of some awesome practice facility that all the star players knew about, and liked to frequent in the offseason. It’s a shame their practice jerseys didn’t change as the rosters were updated, but that’s a very minor detail. I’m definitely a fan of The Hangar’s style, so much so that it inspired me to get involved in a bit of court patching, to try and re-create it in NBA Live 08 PC.

During the NBA Live 10 preview season, I remember producer Ryan Santos talking about The Hangar being a part of the team’s efforts to really celebrate basketball culture. Along with upping the shoe game in NBA Live 10, I feel that they definitely accomplished that goal. As I said, it’s one of my favourite practice arenas, and I’ve enjoyed seeing EA kind of return to that theme with the branded gyms in NBA Live 15 and 16. Team-branded practice courts suit Dynasty Mode, but it’s great to see creativity and style with the default practice gym. From an artistic standpoint, I’d say that along with The Temple, The Hangar was one of the best creations in NBA Live.

No question! Loving my new capture card, so I expect I’ll be doing some more features on things I’ve been holding off on talking about, since it’s much easier to get screenshots and video now. 🙂

EA needs to bring back the Team Practice gym especially for Dynasty where you run the plays. I want to see the hanger come back as the main menu area just like in Live 10, and we need a Practice gym or a personal Gym for our Rising star player for Live run , Pro Am and rising star mode

I don’t know if anyone else remembers, but one of my favorite parts of the Hangar was back when the game first came out, the big screens in the Hangar featured actual advertisements. At one point it was for Red Cross with a number to text to donate to disaster relief.

Another was a “Text this number” to enter to win Microsoft Points. I actually texted it one day and got a text later that day saying I won! It was $20 worth of MP just for entering to win it.

Live 10 definitely brings back a lot of memories.

Must admit I don’t remember that! Just the default highlights, and any saved ones. Might’ve been a regional thing though, as I’m in Australia.