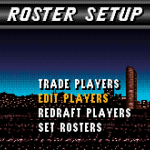 The inclusion of several hidden players in the Super Nintendo version of NBA Live 96 is a trivia note that I’ve mentioned in a few previous columns, including my look back at the game’s Expansion Draft feature. I’ve also mentioned my intention to talk a little more about those hidden players, and this week’s Wayback Wednesday seems as good a time as any.

Hidden players have been found in several basketball video games over the years. A few rookies were hidden in the default rosters of NBA Live 2004, and were unlockable via a code (or DBF editing on PC). Poking around in NBA Live 08’s database uncovered some unused historical teams. The NBA Jam series famously features several secret players that you can play with, and against. And, if you use RED MC to open up the rosters for recent NBA 2K games, you’ll find a few players that have been deactivated and removed from the active roster.

However, NBA Live 96 on SNES features one of the largest selections of unlockable hidden players that we’ve seen in a basketball game. How did that come about? Let’s take a look back…way back…

As I mentioned in my look back at the Expansion Draft in NBA Live 96 SNES, there was a lockout during the 1995 offseason. Unlike the lockouts of 1998 and 2011, no games were ultimately lost, but most of the offseason certainly was. From July 1st to September 12th 1995, no rookies could be signed, and trades and free agency were also frozen. This in turn affected the Super Nintendo version of NBA Live 96, which went gold towards the end of the lockout, and thus couldn’t account for the flurry of signings and movement that began in mid September. The inability to include updated rosters was the reason that the Expansion Draft function was added in the first place. It was also the reason that several players were hidden, and unlockable via Create-a-Player. Unlike most incarnations of Create-a-Player in basketball video games, which allow a capped number of new players to be added to the roster, Create-a-Player in the SNES version of NBA Live 96 was actually implemented as an Edit Player function. Gamers did not add players to the roster, but instead edited dummy players that already appeared on team rosters. Not coincidentally, these dummy players were placed on teams that were missing noteworthy players as a result of the lockout…or in a couple of cases, licensing issues.

If you wanted to add the Class of 1995 rookies, including Kevin Garnett, Jerry Stackhouse, Damon Stoudamire, Michael Finley, Rasheed Wallace, Antonio McDyess, Joe Smith, and Brent Barry, you simply needed to enter their name in Edit Player. Most players were unlocked by simply entering their surname, but a few who shared surnames with other unlockable players required gamers to enter their first initial as well. Upon entering and confirming the name, the game would automatically generate appearance, bio, and ratings data for the unlocked player, saving gamers the trouble of manually assigning them. A few jersey numbers were incorrect, though.

Class of 1995 rookies weren’t the only players who were available to be unlocked via this method. Michael Jordan and Charles Barkley, two very prominent players who were indeed signed to NBA contracts at the time, were absent due to the fact they’d retained the rights to their names and likenesses. Edit Player obviously provided a way of easily putting them into the game, and EA Sports made it even easier, as entering Jordan or Barkley as a custom player’s surname would automatically generate the attributes for His Airness and Sir Charles respectively. EA even took this a step further, as various NBA Legends were unlockable in the Super Nintendo version of NBA Live 96. Magic Johnson – who did of course make a comeback during the 1996 season – was available to unlock, as were his teammates Kareem Abdul-Jabbar and James Worthy, and noteworthy rivals Larry Bird and Isiah Thomas. Older Legends were also in the game as hidden players, including Bill Russell, Wilt Chamberlain, Rick Barry (whose R. Barry code distinguished him from son and then-rookie Brent Barry, unlocked with B. Barry), Oscar Robertson, Elgin Baylor, Nate Thurmond, Pete Maravich, and John Havlicek, to name a few.

However, NBA Live 96 SNES is pretty much the first and last time that this has happened; at least on this scale. Whether EA Sports actually got into trouble for doing it, or they simply elected to avoid trouble in the future, codes to unlock a large number of missing rookies, veterans, and Legends were not implemented in future games. As mentioned previously, NBA Live 2004 had a few unlockable rookies, but NBA Live 99 – affected by the 1998 lockout – saw rookies added via an official roster update. The historical teams in NBA Live 08 also don’t count, as they’re leftover data from a scrapped feature, and cannot be accessed by any in-game means.

Fortunately, the PC version of NBA Live 96 featured updated rosters, including the Class of 1995 rookies, and a few other missing players (with the notable exception of Jordan and Barkley). It also featured a more in-depth Create-a-Player function, which would be further enhanced when Tim, Lutz, and Brien began developing their patching tools for Windows and DOS. The PC version did retain the ability to unlock members of the development team via Create-a-Player though, and the next few releases would also include secret developer teams and players. When it came to representing Michael Jordan and Charles Barkley, Roster Players took their place. With the rise of official roster updates, we’re definitely long past the need for workarounds like the one we found in NBA Live 96 SNES. Back in the day though, it was a cool secret to discover, and one that I remember being printed in a few video game magazines, as well as cheats websites that were around when I was first exploring the Internet. Should you ever find yourself dusting off the Super Nintendo version of NBA Live 96, you can find a list of all the unlockable players and their codes here in the NLSC Wiki. Of course, I’m guessing more people will be interested in unlocking Air Jordan, as opposed to Air Dyck.

From the main menu (Game Setup), it’s the Roster Setup option, and then Edit Players. Can’t miss it.

I want to create my own ideas added to my nba live 2000? Im old school how could i do that? Like add legends Clyde the glide Drexler and Kareem abdul Jabber.

Create them using the in-game Create-a-Player. You can edit the databases to modify their hidden attributes. Please see the DBF Editing Guides in our Wiki for more information.

How do i see the WiKi?

The link is in the navigation bar up top. Can’t miss it. 🙂

One last question? I will need a computer and memory card to do this right? Im just not a wiz kid lol

It’s only possible with the PC version. It can’t be done with the console version.