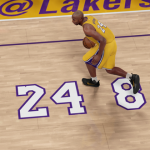 Kobe Bryant is set to play his final NBA game today, as the Los Angeles Lakers wrap up their 2016 season against the Utah Jazz. It marks the end of a long and successful career for one of the best players in the history of basketball, and the only player to suit up for the same NBA team for twenty seasons. Despite the fact that Kobe Bryant was often as reviled by NBA fans as much as he was loved, there’s been much nostalgia and celebration as his career has drawn to a close.

His long NBA career has meant that Kobe Bryant has appeared in numerous basketball video games over the past couple of decades. In fact, former teammate Shaquille O’Neal may be the only player with more official appearances in NBA titles, as he played nineteen years in the league himself, and has continued to be featured as a Legend following his retirement. So, as Kobe Bryant’s last NBA game looms, I thought I’d take a look back at his history in video games.

Kobe has of course appeared in every NBA title since he entered the NBA, but I’m just going to focus on some of the highlights here, kind of a glance back through the years. With that said, let’s take a look back…way back… Kobe began making history as soon as he entered the league. When he made his NBA debut on November 3rd 1996, he was the youngest player to ever play in the NBA, at the age of 18 years, 72 days. Fellow Class of 1996 alum Jermaine O’Neal broke that record when he debuted on December 5th at the age of 18 years, 53 days, and Kobe’s former teammate Andrew Bynum would eventually claim the record, making his debut at the age of 18 years, six days. Despite playing around sixteen minutes per game in his rookie season, Kobe tallied a then-record 31 points in the Rookie Game at the 1997 All-Star Weekend, and of course, won the Slam Dunk Contest.

A lot of people had Kobe Bryant pegged as a future superstar, and those impatient to see him succeed were able to make a head start with him on the virtual hardwood. Kobe was included in NBA Live 97, so he’s been in NBA video games since before they had actual face textures. His default ratings were fairly modest, including 74 for Field Goals, and a mere 66 Overall for Offensive Awareness; a little low for someone who would go on to score 81 points in a single game! That said, his Dunking rating of 94 was somewhat prophetic, given his Dunk Contest performance. While Kobe was still fighting for playing time in his second year – his role increased but he still came off the bench for all but one game – his stock was quickly rising. He was voted to start in the 1998 All-Star Game, and appeared on the cover of not one, but two NBA video games: NBA Action 98, and his own title, Kobe Bryant in NBA Courtside. Courtside was a Nintendo 64-exclusive release developed by Left Field Productions, while NBA Action 98 was developed by Visual Concepts and is something of a forerunner to NBA 2K.

Both are solid games that I’ll be talking about in more detail at some point, though Courtside is perhaps the more interesting release, being personally endorsed by Kobe Bryant himself. Of course, there is some controversy there: rumour has it that Kobe wouldn’t allow anyone else to use the moves he’d motion captured. It’s also been suggested that he had a hand in assigning the player ratings, hence why they were hidden; a rarity in sports video games. He also appeared in the Los Angeles Lakers’ starting lineup, despite being a bench player in real life. The Courtside series only saw two more releases, but they accurately pegged Kobe as a bankable star. Around the turn of the millennium, the graphics in basketball video games were continuing to improve, with players looking more and more like their real life counterparts. Kobe’s mini-fro-and-goatee look was captured quite well in NBA Live 2000, as were the Los Angeles Lakers’ updated uniforms. As I just noted in my NBA Live 2000 Retrospective, the game’s graphics can’t quite compete with what we’re used to today, but max out the detail settings in the PC version, and I still think they hold up pretty well, especially for a sports game released around that time.

By this point, Kobe was coming into his own, and his ratings in video games were starting to reflect that. He’s rated 81 overall in NBA Live 2000, which is probably a little low considering Allan Houston is rated 84 overall in the game, but considering that Shaquille O’Neal is an 87, and no active player is higher than 90, it’s not so bad in context. In any event, 2000 turned out to be a pretty good year for Shaq and Kobe, as they won the first of three consecutive titles, with Kobe also having his best statistical season to date. By 2006, Kobe Bryant was firmly established as one of the league’s best players. He was rated 95 overall in the default rosters of NBA Live 06, while NBA 2K6 has him rated 97 overall, tied with LeBron James and Dwyane Wade for second best among NBA players. Incidentally, Kevin Garnett and Tim Duncan were both rated 99 overall in NBA 2K6, and several Legends are rated 99 and 98 overall. As you can see in the screenshots, player likenesses were continuing to improve through the sixth and seventh generation of consoles.

Those were some appropriate ratings for one of Kobe’s most dominant seasons. While the Lakers were eliminated in the first round in 2006, Kobe had a stellar individual year, averaging 35.4 points per game and scoring a career high 81 points against the Toronto Raptors. In fact, an article on NBA.com even invited basketball gamers to top Kobe’s outburst in NBA Live 06, NBA 2K6, or NBA 06, a challenge that several gamers eagerly accepted. After appearing on the cover of the Sony-exclusive NBA 07: The Life, Kobe Bryant signed on to appear on the cover of NBA 2K10, following his first championship without Shaquille O’Neal in 2009. Incidentally, the player he faced in the 2009 NBA Finals – Dwight Howard, then of the Orlando Magic – graced the cover of NBA Live 10. Howard’s Magic wouldn’t return to the Finals in 2010, but Kobe’s Lakers did, as they captured back-to-back titles, with back-to-back Finals MVP honours for Kobe.

It marked the second time that NBA 2K’s cover player won the title in the same season. Shaquille O’Neal was the first to do so four years prior, when he appeared on the cover of NBA 2K6. Of course, NBA Live also achieved the same distinction that season, as Dwyane Wade had appeared on NBA Live 06’s cover. In any event, the 2009 and 2010 seasons were Kobe’s time to show that he could win titles without Shaq, and he once again proved himself a great choice for cover player. Kobe Bryant’s overall rating proved to be a point of contention before last year’s games were released, as even his fellow NBA players were chiming in to object to what they felt was an insulting number. Unfortunately, as the 2016 season got underway, the old adage of Father Time being undefeated held true, and Kobe’s numbers were well below the usual Black Mamba standard in his final campaign. As such, his ratings have declined in the official roster updates for NBA Live 16 and NBA 2K16, with few complaints from gamers along the way.

Of course, he’s also turned in a few throwback performances, and was voted to start in the 2016 All-Star Game. This resulted in a special All-Star edition card in NBA Live 16 Ultimate Team, which I was lucky enough to snag in one of the LUT challenges. He’s currently coming off the bench behind Jimmy Butler – hey, I’m a Chicago Bulls fan at the end of the day – but the throwback ratings of that card are making him quite effective as a sixth man. And of course, his player model has come a long way from having a couple of pixels for eyes! Funnily enough, as I began writing this article, the Legend Edition for NBA 2K17 was announced, which features Kobe Bryant on the cover. As such, it seems that Kobe won’t be disappearing from NBA video games just yet, as he’ll be featured in MyTEAM, and presumably a couple of the historical teams as well. If you’re a Kobe fan, that’s certainly good news. His career in the real NBA may be over, but the Black Mamba will still be balling on the virtual hardwood.

As I mentioned on last week’s Podcast, I’ll definitely be tuning in to watch Kobe Bryant’s last game against the Utah Jazz. He may not be one of my favourite players, but he is one of the all-time greats, and it is a historic moment. Sure, the Golden State Warriors will be shooting for history themselves, and maybe I’ll switch back and forth between those two games, but I can’t pass up the chance to watch an NBA Legend’s finale. Here’s hoping he goes out in style.

2nd best behind Jordan in my mind and if we are talking video games anything passed 03 and every time I played the Lakers I knew he was going to score 30 plus.

Holding him to eight points while Ben Gordon scored 92 in my NBA Live 06 Bulls Dynasty is still one of my favourite achievements. 😉

I love KOBE, my 2nd fav player behind Jordan.

Hope you enjoyed the retrospective. 🙂