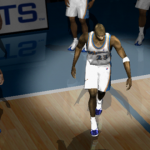 On this day in 2002, Michael Jordan became the fourth player in NBA history to score 30,000 points. His Airness did so as a member of the Washington Wizards – yes, I know I’m not supposed to mention that – but funnily enough, he set the mark in a win over the Chicago Bulls, the team with which he won six NBA championships and established himself as the greatest player of all-time. Although the career scoring feat is more historically significant, that game is perhaps more often remembered for a sequence which ended with Michael Jordan emphatically blocking Ron Mercer.

As I noted in my retrospective of NBA Live 2002, and a few other articles, it was the first game in the NBA Live series in which Michael Jordan appeared as an active player. He’d appeared in EA’s earlier basketball titles, but apart from his Roster Player stand-in, he was absent from NBA Live during his second run with the Bulls. To mark the fifteenth anniversary of MJ’s milestone game, I thought that I’d dust off NBA Live 2002 once more, and try to replicate it. Let’s take a look back…way back…

Entering the game, Michael Jordan needed 15 points to join Kareem Abdul-Jabbar, Wilt Chamberlain, and Karl Malone in the 30,000 point club, an elite group that now also includes Kobe Bryant. He ultimately finished the game with 29 points, seven rebounds, and three assists, scoring his 30,000th point on a free throw with 5:28 remaining in the second quarter. Replicating the timing and nature of the milestone would be a matter of sheer luck, but my aim was to at least match his numbers from the night, and win the game as the Wizards had done. I fired up NBA Live 2002, and began setting everything up. I decided to play on twelve minute quarters, on All-Star difficulty. As I’ve noted before, Superstar difficulty in NBA Live 2002 is way too cheesy. Before I began the game, I adjusted the lineups for both the Wizards and Bulls. A handful of players who played in that game are actually missing from NBA Live 2002: Eddy Curry, Tyson Chandler, Trenton Hassell, and Kevin Ollie for the Bulls, and Bobby Simmons for the Wizards. All the correct starters are present and accounted for, so I decided that that was sufficient. Incidentally, current Bulls coach Fred Hoiberg was on that Chicago team.

After checking that all the game settings were what I wanted them to be, it was time to tip things off. Things don’t go exactly to plan, as the Bulls win the tip, and then MJ fouls Mercer in the first fifteen seconds to give him a couple of free throws. I quickly post up His Airness down the other end, fake out Ron Artest, and blow by him for a layup. Two points down, thirteen to go for 30,000. On the next trip up the floor, Artest bites on another fake, and MJ gets another layup. Just when I’m thinking this might be too easy, the next couple of offensive possessions result in Artest getting cheap steals. It looks like I’ll have to pick my spots, after all.

Towards the end of the first quarter, Michael Jordan has twelve points, mostly from looks around the basket, and three assists. He’s yet to grab any boards, has committed a couple of turnovers, and has one foul. I take him out with a minute remaining so that he can catch his breath, and hope that I can abuse pump fakes to get Kwame Brown and Jahidi White some easy dunks and layups to keep the offense afloat. Kwame makes a layup, and Hubert Davis knocks down a three-pointer, but the Bulls lead 33-30 after one. NBA Live 2002’s offensive rebounding problems, plus an inability to play physical defense, have allowed Chicago to control the boards, and the game.

I briefly tie the game at 37 early in the second quarter, but I don’t want to leave MJ on the bench for too long. I bring him back in at the 8:34 mark and almost immediately, he steals the ball from Hoiberg, leading to a midrange shot to tie things up again at 39. Another three by Davis captures the lead at 42-41, but A.J. Guyton continues the see-saw battle with a long two to put the Bulls up again. Hoiberg is no match for MJ at the other end however, and a pump fake followed by a crossover sets up another midrange jumper to make it 16 points on the night. As such, MJ’s milestone 30,000th point comes by way of his patented jumpshot, with 6:36 remaining in the half. A few defensive stops spur a run that allow me to take control of the game, and I’m up 62-53 at the half. Michael Jordan has his uniform number with 23 points, including a three-pointer (he was 0-for-2 in the actual game), four assists, and a steal. He hasn’t been doing it alone, however. Chris Whitney has eight points to go along with five steals, and Hubert Davis has 12, with both of them knocking down a pair of threes. Kwame Brown is also in double digits with 10 points, and Brendan Haywood has three blocks. Brad Miller leads the way for the Bulls with 16 points.

Some sloppy turnovers result in me squandering the lead as the third quarter wears on, and suddenly I find myself in a back and forth battle once more. Although a couple of jumpshots go awry, MJ unsurprisingly remains a reliable option on offense, and by the time I pull him from the lineup towards the end of the quarter, he has a total of 38 points. It’s a tight game at 89-86 – very close to the real game’s final score of 89-83, as it happens – thanks to Brad Miller pouring in 13 points of his own in the period. I’ve already topped MJ’s points and assists totals – he’s still yet to grab a board – but the game is still hanging precariously in the balance.

Greg Anthony nails a three-pointer to tie things up early in the fourth, which sets up another inevitable shootout where we’re just trading baskets. It’s moments like this where I really appreciate how much the defensive side of the game has improved in subsequent basketball titles. I bring MJ back into the game with 8:17 remaining, figuring that he’s probably going to have to go off for 50+ if I’m going to get the victory. With around 7:39 remaining, he gets his first board of the game…from his own miss, thanks to a floater triggering instead of a more reliable dunk or layup. That’s another improvement you appreciate when you play NBA Live 2002 today.

It’s a tough battle down the stretch, but the tide begins to turn in my favour thanks to the Bulls keeping Marcus Fizer in the game, opposite Michael Jordan at small forward. It works out for them about as well as you’d expect, and with 4:08 remaining, MJ hits 51 points on the night. With just under three minutes remaining, I have a ten point lead, and decide to slow it down and waste the clock. That strategy pays off, though all attempts to snag a few more rebounds with MJ are unsuccessful. I end up winning the game 118-106, as MJ finishes with 57 points, six assists, one rebound, two blocks, and two steals. At the end of the day, I wasn’t too surprised with the line Michael Jordan ended up with. Back in the days of NBA Live 2002, you sometimes had to resort to cheesier strategies to defeat the CPU on harder difficulty levels, and the rebounding issues definitely affected numbers on the boards. I still enjoy revisiting the game from time to time though, and it was fun to do so with a particular theme in mind. As for the real Michael Jordan scoring 30,000 points, it’s just a shame that he couldn’t have done it in a Chicago Bulls uniform. Those two seasons with the Wizards were strange to experience, but they definitely had their moments for Michael Jordan fans like me.