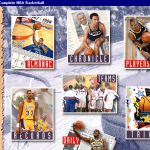 It seems that the retrospective of NBA Jam Tournament Edition PC that I posted a couple of weeks ago was well received, and I certainly had fun producing it. As such, I’ll be creating some more video retrospectives of older basketball video games, and featuring them in future editions of Wayback Wednesday. I’ve got a bunch of games in mind, some of which you may remember and some you may not, which I’m looking forward to dusting off and discussing in detail.

However, for this week’s Wayback Wednesday, I’m looking back at an old release with a written retrospective, rather than a video feature. That’s because the title I’m discussing today doesn’t actually have any gameplay to show, so it doesn’t exactly lend itself well to a video retrospective. That release is Microsoft Complete NBA Basketball.

It’s not the type of title that we’d normally cover in detail here at the NLSC, but for me, is does have some nostalgic value. Hopefully, you’ll find it to be an interesting change of pace. With that said, let’s take a look back…way back… Needless to say, there isn’t much call for such software these days. With freely available and constantly updated resources such as Basketball-Reference.com, NBA.com, and even Wikipedia, such an almanac would really only appeal to the most dedicated fan…and even then, arguably not. Back in the mid 90s though, long before all the online resources that we have today, almanacs were far more popular, and a digital version on CD-ROM was definitely appealing. Just like the websites we now rely upon, it condensed a wealth of information into one easy-to-use resource, which was much quicker to browse.

Complete NBA Basketball was packed with articles on players, the National Basketball Association, and the history of the sport, including information on defunct leagues such as the American Basketball Association, American Basketball League, and National Basketball League (not to be confused with the Australian NBL). It also features New York Times articles for one hundred players, offering up additional basketball history and commentary. There were complete player and team statistics, year-by-year results and recaps, award and Draft histories, and so on. It lived up to its name, being pretty much a complete resource.

We’re not just talking stats, biographies, and recaps, though. It also included photographs, audio, and even video content. It’s probably hard to appreciate how exciting that was if you’ve grown up with reference websites, Google Images, and YouTube, but in the mid 90s, that was a big deal. There were videos of historic moments, and even some brief highlight reels for some of the biggest names in the game. You could even search the multimedia archives to jump straight to the articles containing the video or audio content you were interested in. Strangely though, there was no text search option for the articles.

Being a digital resource, there was functionality to print content, as well as copy it to the clipboard and paste elsewhere. It was well laid out, easy to navigate, and in my opinion, visually appealing. It also randomly played sound bites while you browsed the articles, including audio snippets of famous plays, and NBA arena sounds. Of course, if you found them distracting, you could always switch them off in the options. All in all, it was a well put together resource. Microsoft released a few editions of Complete NBA Basketball between 1994 and 1996, before ultimately discontinuing it. I have the ’94-’95 edition, which is accurate as of the end of the 1994 season, though it also includes profiles for the rookies who were set to make their debut during the 1995 season, such as Grant Hill, Jason Kidd, and Glenn Robinson. There’s even a brief mention of the Toronto Raptors towards the end of Isiah Thomas’ biography, as he’d already accepted the position of Executive Vice President at that point.

I actually picked up Complete NBA Basketball in a bargain bin, a few years after it was released. If you’d purchased it prior to the 1995 season, and you had a modem, you could actually make use of the NBA Daily feature, which would keep you up to date with scores, statistics, and results throughout the year. Once again, that wouldn’t sound like anything special these days, not when all that information is at our fingertips, and we can even stream games live and in HD. Even by the time I picked it up, you could at least check out the daily results and some highlight clips online. When it was released though, such a service would’ve been far more useful, and a more exciting technological achievement.

Because I bought it when it was already out of date, I mostly used Complete NBA Basketball to read about the history of the game, and look up information that wasn’t as readily available online as it is today. I remember it being quite useful as a resource for making old season roster updates for NBA Live. As it happens, it’s also the source of the image I used for the story I published on the NBA Live Domain about Larry Bird’s comeback with the Houston Rockets in NBA Live 95.

Apart from satisfying my thirst for knowledge of the history of basketball and providing information for patching, the trivia game is probably what I enjoyed most about Complete NBA Basketball. It featured a sizeable database of questions related to the history of basketball, and offered both a “Pre-Quiz Warm-Up” mode where questions could be skipped, and the “All-Star Challenge”, the trivia game proper. Correct answers counted as field goals made, while the total number of questions answered counted as field goals attempted. The Best Players list kept track of your best field goal percentages – in other words, your high scores – along with the best streak of correct answers in each high score that you tallied. Needless to say, the more I learned about the history of the NBA and basketball, the better I performed in the trivia game. My high scores have been reset and lost many times over through not backing up the file and transferring it to new computers, but from memory, I managed some streaks in the 20s. Playing the trivia game years later though, it’s easy to mess up. For example, I once gave the incorrect answer of Michael Jordan being the all-time scoring leader in the Playoffs. Since I was playing following the 1998 season, when MJ got the record and that subsequently became the correct answer, it was an automatic response on my part. As of 1994 however, Kareem Abdul-Jabbar was the correct answer. Whoops.

As I’ve noted a few times in this retrospective, there’s really no call for a resource like Complete NBA Basketball these days. The expansion of the World Wide Web has provided us with more comprehensive coverage, and resources that are constantly updated and freely available. That said, if a new version was to be released, and featured regular updates along with some bonus games and features…I think I’d at least consider it, depending on the price, and whether or not there were subscription charges. As it stands, the version I own does have nostalgic significance to me. Like the old basketball magazines I have stored away, it’s a throwback to what it was like to grow up an NBA fan in the 90s. And hey, I’ve yet to complete a 100% run in the trivia game. Now there’s an idea for a Let’s Play…or perhaps not.