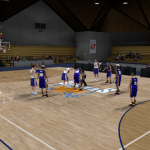 On this day in 2001, the NBA D-League (then known as the NBDL) tipped off its inaugural season with the Greenville Groove hosting the North Charleston Lowgators. The league may have changed its name, and neither of those teams is still active, but over the past fifteen years the D-League has become a stable farm league for the NBA, with several noteworthy alumni. Despite its growth and increasing importance to the NBA, to date the D-League hasn’t had much of a presence in basketball video games. However, it played a significant role in NBA 2K10’s My Player mode, the first incarnation of what is now known as MyCAREER.

Since it’s the fifteenth anniversary of the inaugural D-League season, and I’ve been playing quite a bit of MyCAREER in NBA 2K17, I thought I’d look back at My Player in NBA 2K10, while also touching on the D-League’s role in the mode. The possibility of starting out in the D-League is something that quite a few gamers have expressed an interest in seeing return, and the prospect of multiple career paths is something that I find intriguing as well. My Player itself has undergone a lot of improvements on top of being rebranded into MyCAREER, but what was that first version of the mode like?

Popping in NBA 2K10 and firing up My Player, it’s very obvious how far both the mode and the game in general have come. I would have to say that NBA 2K10’s gameplay has not aged very well, especially in comparison to its immediate successors, NBA 2K11 and NBA 2K12. Controls and player movement don’t feel as sharp, and the AI leaves much to be desired. The improvements to NBA 2K’s gameplay and career mode over the past seven years can make it a little difficult to appreciate the experience on offer in NBA 2K10, but I’ll try to put it all into historical perspective. From the start, My Player had the basics of a solid career mode in place. You began your career playing for an NBA team in the Summer League, referred to in-game as the Summer Circuit. The Summer Circuit rosters are filled with a mixture of real rookies and sophomores, and fictional players. During this time, your goal is to play well enough to earn an invitation to an NBA training camp, which consists of up to five inter-squad scrimmages. Failing to impress during training camp will see you begin your career in the D-League, in hopes of finally being able to make the big time. Skill Points can be earned each game, in order to improve your ratings.

The depth that would be introduced in later iterations of My Player and MyCAREER isn’t there yet, but it’s a reasonably solid experience for the mode’s debut. It was far more than NBA Live had done with Be a Pro, which was a single game experience in the PlayStation 3 and Xbox 360 version of NBA Live 09, and a very bare bones single player career mode in the PlayStation 2 release. NBA 2K’s career mode had to start somewhere, and from the popularity it has gained over the years, it’s clear that My Player was at least good enough to whet basketball gamers’ appetites.

That first version of My Player certainly had its fair share of issues, however. While comparisons to its successors may not be entirely fair, it is worth noting that unless you want a very straightforward single player career experience, it’s not a mode you can go back and spend a lot of time with today. Even if you can forego all the bells and whistles we’ve since come to expect, issues with the gameplay, various problems with functionality, and the general design concept of the mode will likely make it a little difficult to get much enjoyment out of it now. For a start, the six Summer Circuit and five training camp games are definitely overkill. It’s a long road to the NBA, and while that isn’t necessarily a bad thing – or unrealistic – it is a long slog through some ugly basketball to get to the main part of the mode. The general idea of playing the Summer Circuit to earn a training camp invite, and subsequently ending up in the D-League if you don’t make the cut, is definitely a good one. However, the prospect of having to play eleven games before you get to the league isn’t for everyone. Of course, if you completely tank your first training camp game, you’ll skip right to being in the D-League.

If, like me, you’re hoping that Visual Concepts will improve the grading logic in future games, you’ll find NBA 2K10’s MyPLAYER to be very frustrating. As you might expect, the grading system is extremely primitive, mostly focusing on stats and really lacking in logic at times. Teammates often ignore you, and if they do pass to you, it’s usually far too late. It’s very easy to be penalised for calling for a pass at the wrong time, or excessively demanding the ball. They may have a point though, as you begin your career as a 39 Overall player. 39 Overall! Forget the D-League; with ratings like that, you probably should’ve stayed at college as an assistant coach!

Another problematic aspect of My Player in NBA 2K10 is the possibility of “earning” a negative amount of Skill Points following a bad performance. A bad game can potentially drain all of the Skill Points you currently have on hand to spend, though thankfully your balance can never dip into negative numbers. Such an approach was definitely a mistake, as each game should offer at least a token amount of experience, and a chance to upgrade your player. Fortunately, Visual Concepts moved away from that idea very quickly. Can you imagine the uproar if it were possible to lose Virtual Currency following a tough game in NBA 2K17? So, there are definitely some design flaws with NBA 2K10’s My Player, some clunky and frustrating moments, and even some irritating bugs, such as the referees standing around for twenty seconds before passing the ball to a player for the inbound. On the whole, it hasn’t aged extremely well, and to be honest it isn’t a lot of fun to go back and play, unless you really lower your expectations. With that in mind, it must be a miracle that the mode has actually found such an enthusiastic audience, and that Visual Concepts has had great success in making it such a focal point in recent games…right?

Not quite. As I said before, this all has to put into historical perspective. The mode had to start somewhere, and as dedicated as the NBA 2K developers may be, there’s only so much they can achieve in one development cycle, especially for a mode making its debut. The foundation is there, and even at the time it was well beyond anything that NBA Live, or indeed any other basketball video game, had done with a single player career experience. It feels primitive compared to what we’re used to now, but in 2009, it was shiny and new, enticing for players desiring a career mode, and more than serviceable.

The D-League is something that I’d like to see return in future NBA 2K games, both as an element in MyLEAGUE and MyGM, and a career path in MyCAREER. Whether it’s beginning your career there, or finding yourself using a stint in the D-League to ultimately find a home in the NBA, there’s some fun to be had there. I would suggest that it either be an optional path, or one that is taken only if your performance makes it necessary. Considering the problems with starting out as a 55 Overall player in NBA 2K17, I’d also suggest that 39 Overall is absolutely out of the question, these days. Going back and playing the first My Player mode has not only given me a greater appreciation of how far things have come with MyCAREER – even putting aside the production values of the story elements in the past few games – but also a greater appreciation for its beginnings. NBA 2K10’s My Player mode stands as an example of how it’s difficult to get everything right on the first try, but also proof that a first attempt can still be quite good, featuring ideas that are definitely worth revisiting. If you’re after some retro basketball gaming fun though, you may want to look elsewhere. Subsequent games have simply set the bar too high.

At the time, I really loved being in the D-League. I never had a single player experience like the 1st MyPlayer until it was introduced in 2K10. Eventually I did opt for association mode over finishing my career in MyPlayer but it was good experience for a first time game mode.

Agreed. It might sound like I’m being too harsh on it, but that’s a by-product of not playing it back in the day, so rather than experiencing the evolution of the mode while having fond memories of the original, I’m going back to where it began after spending a lot of time in more advanced iterations.