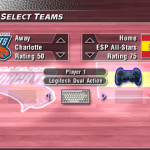 These days, we’re used to extra content in basketball video games, such as the historical squads in the NBA 2K series. While NBA Live currently doesn’t include any historical content outside of Ultimate Team (aside from retro jerseys, of course), the series used to feature All-Star teams comprised of players from the 50s, 60s, 70s, 80s, and 90s, along with a pool of Legends that could be placed on the current rosters. Of course, that’s not counting the historical teams that were intended to be in NBA Live 08, which were ultimately scrapped.

NBA Live 2004 featured the usual lineup of Decade All-Star Teams, which incidentally is the last time that Michael Jordan has (officially) appeared in an NBA Live game to date. However, NBA Live 2004 also featured two other bonus teams: the Charlotte Bobcats, who weren’t set to join the NBA until the following season, and the Spanish National Team. The former was revealed before NBA Live 2004’s release and available out of the box, while the latter had to be manually unlocked.

It was a somewhat unique situation as far as bonus content in NBA Live is concerned, so let’s take a look back…way back…

I’ve mentioned this in a previous edition of The Friday Five, but I need to confess it again. I was completely wrong about the Charlotte Bobcats appearing in NBA Live 2004. During the preview season, there was speculation that they’d be in the game, and I was adamant that it wasn’t going to happen, since they wouldn’t begin playing until the 2005 season. It was pointed out that an expansion team had appeared in Madden a year before their debut – once again, I’m guessing the Houston Texans and Madden 2002, based on the timeframe – so there was a precedent in an EA Sports game. Sure enough, the Bobcats were indeed put into the game a year early. There was a catch, of course. The Bobcats didn’t have any players yet, so in NBA Live 2004, they have a roster of eight placeholder players, named “Point Guard”, “Shooting Guard”, “Small Forward”, “Power Forward”, and amusingly, “Center Center”. As you’d expect, they’re some of the worst rated players in the history of basketball video games, with overall ratings of 23 and 24. There’s no five-on-five scrimmage mode in NBA Live 2004, but you could easily create a makeshift one with the Bobcats as your opponent, and the Rookie difficulty setting.

It is possible to sign and trade real players to the Bobcats, though doing so will effectively remove them from Dynasty Mode, as the Bobcats are only available for exhibition play. Unfortunately, the newly revamped and rebranded Dynasty Mode in NBA Live 2004 only supports 29 teams – no more, no less – so even with all our messing around with the databases, we couldn’t get the Bobcats into the league. Still, it was fun to have them in the game, and when we made the 2005 season roster updates for NBA Live 2004, they were at least available for Season, Playoffs, and Exhibition games.

For those of us with the English version of NBA Live 2004, the Spanish National Team wasn’t available by default. It’s been a while, so I couldn’t remember if it was actually unlockable through any in-game means. A quick Google search suggests not, with the top results being a couple of threads right here on the NLSC, which give instructions for the only method that I could recall: editing the teams.dbf file, and changing the TEAMCODE value. No further editing was required, as the team was complete with players, logos, jerseys, and so on.

NBA Live 2004 was the first game in the series to have an alternate cover for an international market, with Raul Lopez appearing on the Spanish cover. This is obviously the reason for the inclusion of their national squad in the game. To the best of my recollection, the team was available out of the box in the Spanish version of NBA Live 2004, and seemingly just left in as an Easter Egg in the English version. Due to the inclusion of the team, Juan Carlos Navarro and Jose Calderon actually made their NBA Live debut a few years before they finally made the jump to the NBA. Looking back on these teams in NBA Live 2004 certainly makes me feel a little nostalgic. NBA Live 2004 is one of my favourite games in the series, so that probably has something to do with it. As I said though, as far as bonus content is concerned, the Charlotte Bobcats and Spanish National Team are kind of unique. Sure, we’ve had teams move and re-brand, but since NBA Live 95, only three expansion teams have joined the league, and only the Bobcats were placed in the game a year early. FIBA teams and an accompanying mode were added in NBA Live 08, but they were an advertised feature. Of course, as previously discussed here in Wayback Wednesday, NBA Live 08 did have some secrets of its own.

Reminiscing about the Bobcats and Spanish team takes me back to a time when we were really starting to do some creative things in the patching community. Granted, we’re definitely getting some awesome bonus content in basketball video games these days, most notably the retro teams in NBA 2K. However, they’re a feature that’s openly advertised, and we pretty much expect that content to be in the games. In NBA Live 2004, the Charlotte Bobcats were revealed in previews, but they weren’t really hyped up, and they’re not even mentioned on the box. The Spanish National Team was something different, but it was a regional bonus that had to be activated through modding for most users. You don’t really get those surprises anymore.

Whether they were being used as-is, or as the basis for a modding project, NBA Live 2004’s two surprising bonus teams were a fun inclusion, on top of the usual Decade All-Star squads. A few of the names may have changed on that Spanish squad, and the Bobcats are no more, but they both live on as one of NBA Live’s more unique and interesting trivia notes.

Cats were being still garbage in Live 05 with the worst real roster ever and Primocz Brezec at the center. 🙂

Did not know about the Spanish team. 😉