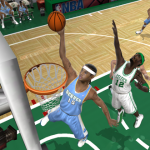 The next retrospective that I’ll be posting as part of our ongoing 20th Anniversary of NBA Live content will take a look back at NBA Live 2005. The second release during a strong three year run for the series, NBA Live 2005 is still considered to be one of EA Sports’ best basketball titles. That’s something I’ll obviously be examining in greater detail in my retrospective, but for now, I wanted to share something that I came across in my archives: a scan of a GamePro magazine article from way back in April of 2004, which offered up a quick preview of NBA Live 2005.

It’s always interesting to reflect on previews of basketball video games and our reactions to them, and then compare to them how the games actually turned out and how we felt once we got to play them ourselves. There’s obviously been plenty of time for the dust to settle on NBA Live 2005, so let’s take a look back…way back…

First of all, here’s the article: As you can see, it’s a very brief preview of NBA Live 2005. The description of Freestyle Air is what immediately stands out to me, as it didn’t turn out to be very accurate. Freestyle Air in NBA Live 2005 gave us greater control over our mid-air moves by allowing us to manually adjust shot attempts with the second press of the Dunk/Layup button. It also expanded offensive rebounding controls, giving us manual control over grabbing the board, attempting a tip-in, or trying for a put-back dunk. We did not, however, have control over our dunk attempts with the left stick. Believe me; in the wake of digging up this article, I fired up NBA Live 2005 and tried.

So, what happened here? It’s possible that Freestyle Air was originally supposed to be deeper in NBA Live 2005, with greater control over dunk attempts as described. However, it’s also quite possible – and perhaps more likely – that GamePro simply made an error in relaying the information that EA Sports had given them. It should be noted that movements of the left stick do play a role in some of the combinations for the new Slam Dunk Contest, which was yet to be announced when the article was published. Personally, I’d chalk it up to miscommunication.

The article also notes NBA Live 2005’s target release date as November 2004. In fact, the console versions of NBA Live 2005 would be released in late September in North America, with the PC version coming in late October. It also mentions more lifelike faces and more detailed hair, jerseys, and shoes, which is a promise that NBA Live 2005 was able to keep. Although not everyone is a fan of the lighting effects in NBA Live 2005, the game definitely was an improvement on NBA Live 2004 in terms of its textures and models.

I’ve managed to dig up a thread in our Forum discussing the GamePro article. It’s definitely interesting to look back on our thoughts and concerns at the time. Freestyle Air certainly didn’t make the game any less realistic, and with the inclusion of gameplay sliders – introduced to the series the previous year – it was definitely possible to ensure that the game didn’t become a dunk fest. I also have to tip my hat to Forum user Bang, here; he correctly predicted the inclusion of the Slam Dunk Contest in NBA Live 2005, well before it was officially announced. I also find myself reflecting on how times have changed when it comes to the preview season for basketball video games. While print media still exists, online resources are obviously far and away the preferred medium these days, with social media in particular delivering a lot of previews straight from the source. The preview season is a much bigger deal, with early gameplay footage, trailers, developer blogs, and events where gamers get hands-on time with games while they’re still in production. Of course, EA’s very first community event for their long-running basketball series, held in August 2004, did in fact offer gamers an early look at NBA Live 2005.

As for GamePro, they ended up awarding NBA Live 2005 a score of 4.5 out of 5. Generally speaking, the game received favourable reviews, and for good reason. Once again, I’ll be going into more detail about NBA Live 2005 in my forthcoming retrospective, so stay tuned.