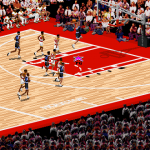 Beyond retrospective articles and videos – and of course, actually dusting off retro video games to play them – there’s another way for us gamers to get a nostalgia hit: old magazines and articles. To this day, I regret throwing out my entire collection of Nintendo Magazine System mags, as there are times when I’d love to look back on them and reminisce. With basketball video games coming as far as they have, it’s interesting to look back on old reviews and previews to see the things that once excited us, as they often seem mundane many years later.

Recently, Arcane stumbled across a couple of Nintendo Power articles on NBA Live 95, the first game in the NBA Live series and a title that’s widely considered to be a classic. For this week’s Wayback Wednesday, I thought I’d share them with everyone, and offer up a few thoughts on their contents. So, let’s take a look back…way back…

First, let’s take a look at a review of the game: These days, a review like that may seem like it’s overselling a game that is quite primitive compared to the titles that have been released in recent years, but you need to keep it in perspective. As I said in my own retrospective of NBA Live 95, it was a great game for it’s time, and one that does hold up surprisingly well over two decades later. There’s an impressive amount of realism given its vintage, so the review’s praise of the AI is well-earned. When it was new, the depth and quality of NBA Live 95 was certainly worth getting excited about. At the time, few basketball games had come close to being that good.

You’ll also notice that the review makes specific mention of the ability to pass on the run. I touched on it briefly in my Team USA Basketball video, and I want to do a more in-depth feature on the improvement from NBA Showdown to NBA Live 95 at some point, but being able to pass to a teammate in stride instead of having both players stop in place to executing the passing and catching animations was a significant jump. NBA Live 95 did feature one of the biggest year-to-year improvements in the history of basketball gaming, so the enthusiasm in the Nintendo Power review is understandable, and I would say on point.

Here is the second article that Arcane sent along. As you can see, it offers up some tips for the game, as well as some explanations of basic basketball strategy. First of all, can just I say how much I love the tip of not saving when you lose? I’m pretty sure that it’s actually meant to be tongue-in-cheek, but that’s a hilarious way to end a mini-strategy guide. If all else fails, remember that this is just a video game, so it’s totally fine to be a sore loser and cheat! Anyway, the strategies it details in terms of playcalling once again underline how advanced NBA Live 95 was for its time, especially compared to its immediate predecessors. Again, the AI isn’t close to what it is today, and the ability to call plays on the fly wouldn’t actually be added until the PC version of NBA Live 96, but it was feasible to play strategically.

While those tips are sim for the most part, it should be noted that the advice to just stand in the key while using Half Court Trap on defense isn’t exactly realistic. The illegal defense rule – the NBA’s forerunner to the defensive three second violation – wasn’t in effect in NBA Live 95, so it was possible to have a defender camp in the lane to block shots and rebound. You can always choose to hold yourself accountable and stick to playing man-to-man instead of an illegal zone, but it’s admittedly not quite as effective. All in all, those are some solid tips for NBA Live 95, and the breakdown of the statistical leaders is a nice touch as well.

I personally always enjoy looking back at NBA Live 95, so thanks again to Arcane for finding those scans, and sending them along. If we can unearth any other retro articles on basketball video games, I’ll be sure to feature them in future editions of Wayback Wednesday!

Over 20 years since this games’ release. Tx for making me feel super old today fellas! LOL

Don’t worry, doing it to ourselves as well. 😉

I just read the article and it did brought hours of memories playing Live 95 on SEGA Genesis for me. The rollerskating players didn’t bother us that time…If the young NBA video game players experienced that era, there’ll be less nitpicking on how the game looks and plays today.. 😀

It probably is a bit easier to appreciate how far they’ve come, when you remember the more primitive games where players had pixels for eyes, and even the most sim games still had a long way to go before they were as realistic as we wanted them to be. 🙂

yeah and limited hairstyles…i remember having bald, receding, and flattop 😀 i just played NBA Live 98 on an emulator and still had the best time with kobe and shaq 😀 if only i can add images to this comment haha

I’ve yet to find a good plugin for images in the comments section on the main page, but feel free to post them in the Forum if you’ve got something nifty to share!