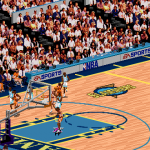 This is Wayback Wednesday, your midweek blast from the past! In this feature, we dig into the archives, look back at the history of basketball gaming, and indulge in some nostalgia. Check in every Wednesday for retrospectives and other features on older versions of NBA Live, NBA 2K, and old school basketball video games in general. You’ll also find old NLSC editorials re-published with added commentary, and other flashback content. This week, I’m taking a look back at the classic custom teams in old NBA Live games.

If you asked me to name a popular Wishlist item regarding roster management in the past decade or so, custom teams would have to be at the top of the list. When it comes to NBA Live, we haven’t had an in-built Create-a-Team function since NBA Live 2000. The option has also been absent from NBA 2K on the current generation, making it a more recent addition to the Wishlists sent in to Visual Concepts. Although you could argue that there are more pressing issues with both NBA Live and NBA 2K, it’s something that still bugs basketball gamers as it’s a feature that’s fallen by the wayside, and one that could be found in very old titles.

Of course, the custom teams that could be found in the first few iterations of NBA Live were a little different to the functionality that we want to see return. They do have their own nostalgic charm of course, so let’s take a look back…way back…

When we talk about custom teams, we’re usually talking about the ability to create a brand new team from scratch, and fill out the roster with players of our choosing. We’ve generally had to pick from some generic logos – not always very good ones – and have also been able to customise team colours. That’s the functionality that I believe most of us would like to see return, but originally, custom teams in NBA Live were a lot more basic. There were four of them, all pre-made, and the only customisable aspect of them was the selection of players that you added to their rosters. Those four teams were the Slammers, Jammers, Stealers, and Blockers. Appearing in NBA Live 95 through NBA Live 97, their rosters were empty by default, ready to be filled by duplicates of NBA players. The custom teams couldn’t be used anywhere except in exhibition play, and you were prompted to choose the players before each game, though your previous choices were saved and could be easily overwritten. It was even possible to create custom teams comprised entirely of clones, and assign created players once that functionality was added in NBA Live 96. In the PC versions, lineups could also be reordered without re-selecting players.

Each team had its own colour scheme, and logos that were generic, but not unappealing. It would be fair to say that their names weren’t particularly creative, but the basketball motif was appropriately generic and in my opinion, suitable. Although they couldn’t be modified in-game, once the necessary tools had been developed, it was feasible to replace their artwork and even change their names in the game’s executable file via hex editing…at least on PC. Other than that, they remained a very basic and straightforward implementation of custom teams. To that end, looking back on it now, some basketball gamers may admittedly find the concept rather pointless.

The point of the original custom teams, of course, was to allow users to put together their own fantasy squads. In the console versions of NBA Live 95, this was done in lieu of roster editing functionality; in later releases, it allowed the creation of fantasy teams without having to mess up the default rosters. It was a good way for two gamers to go head to head using all of their favourite players, or set up a new challenge against the CPU. The concept is obviously outdated, and it’s not the functionality that we want to see added in future games. However, it was a fun idea, and ultimately paved the way for a more in-depth Create-a-Team.

While I spent most of my time in those early NBA Live games playing Season mode with updated rosters, I do have fond memories of using the custom teams as well. Before I discovered the NLSC and the editors that Tim, Brien, and Lutz created, I used custom teams to play games with updated All-Star lineups. Since I liked to keep the rosters as up to date and accurate as possible, and custom teams kept all original lineups intact, they were an appealing option when I played with friends who were more casual basketball fans, and wanted to mess around with all the top players. Beyond that, sometimes I just liked to create weird and wonderful lineups of my own. From NBA Live 98 through NBA Live 2000 on PC, custom teams were expanded to include more options such as city, name, colour scheme, and logo. Unfortunately, there was only a small selection of logos, and they weren’t generic enough for most gamers’ liking. Building teams still involved creating duplicates of players on NBA rosters, so they were still only intended for use in exhibition play. Of course, by that point NBA Live had begun to utilise DBF files, so it was actually a handy way of adding new teams to the game, and then editing their properties externally after saving the roster.

Custom teams would disappear after NBA Live 2000, but a couple of releases on Xbox 360 and PlayStation 3 featured a “Quick Pick” mode. It was intended as a substitute for the long-absent custom teams, allowing gamers to build their own fantasy squads and play an exhibition game. It lacked a full suite of customisation tools however, as gamers simply selected an NBA team, with the fantasy lineup being used in place of the default roster. It wasn’t a bad idea, but needless to say, it wasn’t the custom team functionality that most gamers wanted, and had been hoping for since the feature was dropped from NBA Live.

Hopefully, custom teams do return to both NBA Live and NBA 2K at some point in the not too distant future. While fully customisable teams would obviously be preferable, it might be a nice throwback for EA to include some pre-made configurations based on the old Jammers, Slammers, Stealers, and Blockers. As a long-time fan of the series, I know I’d certainly appreciate the nostalgic nod to those early games, and enjoy seeing those names appear once more. If nothing else, perhaps updated versions of the logos could appear in Ultimate Team. Now that would definitely be something that I’d want to add to my collection.