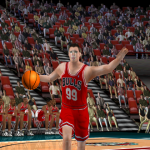 While there’s still a long road ahead of the NBA Live series following its reboot with NBA Live 14, it has made some promising steps, and demonstrated some really good concepts. Something that I believe NBA Live 16 actually did a lot better than NBA 2K16 was the manner in which it allowed players to scan their faces into the game. I still haven’t been able to get NBA 2K’s face scan to work properly; conversely, I’ve found the NBA Live companion app much easier to use, and the results were very impressive.

Of course, this isn’t the first time that the NBA Live series has allowed players to put their faces into the game. The PC versions of NBA Live have obviously allowed for the creation of custom face textures through patching, but two games in the series – NBA Live 2000 and NBA Live 2001 – have actually facilitated the creation of custom faces in-game. The feature was called Face in the Game, and it actually worked quite well.

It’s an often overlooked feature from a time when EA Sports were being extremely innovative with the NBA Live series, so let’s take a look back…way back…

Face in the Game was available as an option in NBA Live 2000 and NBA Live 2001’s Create-a-Player, allowing gamers to import their faces from an image file. In practice, it wasn’t completely unlike creating a custom face texture through external manipulation. You needed to use a large, good quality photo, in which you were facing forward. The clearer the photo, the better the custom face would turn out. The game provided a few example photos, which I’ve used in the screenshots for this article. Once you have your photo and it’s been placed in the appropriate folder, it’s time to set the points to mark out the eyes, eyebrows, nose, mouth, and outline of the face. It’s important that the points are positioned precisely, so that the facial features are properly recognised. The game provides instructions for correctly placing the points for each part of the face, and the example photos do help make things clearer. With a little trial and error, you should be able to get it right. If you do mess up, you can reset the points, and start over.

After the face has been added and you’re satisfied with the results, you can customise it as you would a regular created player face, choosing your hairstyle, facial hair, and sculpting the head shape. NBA Live 2000 offers a little more freedom in terms of the head shape, as its Create-a-Player allows you to morph the shape with a slider, whereas NBA Live 2001’s head shape slider scrolls through some ready-made options. All in all, it’s not completely unlike NBA Live 16 GameFace HD, though obviously without the 3D scanning, and the quality naturally isn’t as good.

Depending on the quality of the photo however, and how accurately you set the points, the results can be surprisingly good. If the lighting is a little off in the photo, the face might not quite blend into any of the available skin tones properly, which in extreme cases will make it look like the player is wearing a mask. Likewise, if the shape of your head doesn’t quite match the options available in NBA Live 2001, then you’ll have to settle for the closest choice. As I said though, it is possible to end up with a pretty good quality face that is far less generic than one made using the regular Create-a-Player options.

In fact, going back and checking out Face in the Game today, I’m actually surprised by the quality, as I didn’t remember it being as good as it is. The results don’t exactly match GameFace HD, or NBA 2K’s scans, but for tech developed in the late 90s, it doesn’t hold up too badly. NBA Live had a strong claim on being the best basketball game on the market at that time, and beyond the gameplay and the game modes, innovative features like Face in the Game were one of the main reasons for that. It also meant that the PC version was unquestionably the definitive version of the game, as the feature wasn’t available in the console releases. My first thought is that a feature like this would probably be unnecessary these days, but upon further reflection, it might actually be a good alternative to face scanning, for users who don’t own the necessary hardware. Face scanning is now possible in the PC version of NBA 2K16, but only on devices that feature an Intel RealSense camera. The PlayStation 4 and Xbox One versions require the PlayStation Camera and Kinect, respectively. And while I’m impressed with the NBA Live companion app’s capabilities, you need a fairly new phone or tablet to use it.

Having a feature like Face in the Game as a backup option would be great, especially for the PC version of NBA 2K since it only supports the use of inbuilt RealSense cameras, rather than a peripheral that can be purchased separately. With the face sculpting options the game provides, the results likely wouldn’t be as good as a scan, but still superior to customising a generic face. NBA Live would need to add those sculpting options, but the tech is already in place to make use of the camera in smartphones and devices. Surely, it could be adapted to take a suitable photo, set points as in Face in the Game, and import the face onto a customisable headshape.

Regardless of whatever solutions may be developed going forward, Face in the Game stands as one of NBA Live’s most innovative, yet somewhat overlooked and forgotten features. As a forerunner to the face scanning of today, it’s both functional and surprisingly high quality for its time. In fact, now that we can all take great photos with our smartphones, I might have to give it another try, and just for fun, compare the results to my NBA Live 16 scan. I expect the face scan will still be superior, but my imported NBA Live 2000 face might just look a little better than the one I made using a scanned school portrait, all those years ago.

Don’t really care anything about NBA-Live, since they abandoned the PC community.

Yes, you’ve made that pretty clear with a lot of your posts in the past. No offense, but I feel like you’re still taking that way too personally. They made an unfortunate decision based on sales; I was as disappointed as anyone else about that, and I’ll always advocate for a PC release, but I understand the situation. I’m not going to hold onto a seething bitterness just because a company has chosen not to release a game on a certain platform anymore, disappointing as it may be. I do get where you’re coming from of course, I just find it a bit strange that you’re still talking about it all these years later.

Whether you like or not, we do still cover NBA Live – past and present – so chances are you’ll come across a mention of NBA Live or content related to it on the site. If you can’t stand to see NBA Live mentioned because it dredges up bad feelings because it’s no longer coming out on PC, then that’s kinda your problem. I can’t really help you with that, beyond suggesting that you ignore any NBA Live content we post, and just follow the NBA 2K coverage.

While you may not care to read anything about NBA Live – and again, I do understand why – you obviously did care enough to post a comment on an article talking about an old NBA Live feature, as well as the NBA Live 16 roster update the other day. Furthermore, you’re not just taking a shot at EA Sports and NBA Live here. You’re also being pretty dismissive of my efforts to create original content and explore what I feel are interesting features from basketball video games of yesteryear. I understand that not every article will resonate with every reader, but “don’t care” responses are kind of rude.

In Wayback Wednesday, I’ve covered some games that we’ve never really touched upon before, and I’ll continue to do that. I would like to talk a little more about NBA 2K, but I didn’t really play much of the series up until it was released on PC, so when it comes to a retro-themed feature like this one, I don’t have as many personal reflections and memories to draw upon. There are a variety of topics and games I want to discuss moving forward in Wayback Wednesday, and I’d be open to some suggestions too. However, NBA Live will come up again, either mentioned in passing or as the main subject of a column. If that bugs you as much as it does, then again, maybe skip those articles.

Why are you taking it personal ? It’s not a problem at all, besides the fact that they screwed their customers. Other posters on here share the same sentiment, but I understand you have to not be bias towards any of them, for promotional purposes. I have a right to voice my opinion, and just as you said to me, if you don’t like it, don’t respond to it. I don’t feel like you had to write a soliloquy to express what you feel personally to my response, for the public to see. You could have just PM’d me. I respect that you’re a moderator or whatever, but I can guarantee there has been other rants on here about other games or subjects, that are minor compared to mine. Have a good one.

You commented publicly on an article that I wrote, so I responded in kind.