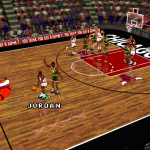 Sometimes, I’m surprised at the outrage over the soundtracks in basketball video games. Sure, not everyone has the same taste in music, but suggestions that a soundtrack completely ruins the game feel like an exaggeration. After all, if the gameplay and game modes are more than satisfactory, isn’t that what should matter the most? You might as well suggest that the colouring and details on the main menu spoil the game…and yes, we’ve done that too.

The more I think about it though, the more I realise that the music in basketball video games is significant in its own way. An appealing soundtrack clearly resonates with basketball gamers, and that’s evident by how much it’s tied into our nostalgia for older titles. Whether you’re firing up an old game to play it again, or you’re looking up old video game music on YouTube, as soon as you hear those opening bars, you’re taken back to a time when you loved that game, and played it for hours on end.

We all have our own favourites, both in terms of soundtracks and the games they’re attached to, so for this week’s Wayback Wednesday, I wanted to talk about some old school basketball game music that always make me feel nostalgic. So let’s take a look back…way back…

I’ve mentioned it before, but NBA Live 96 is one of my all-time favourite games: in the NBA Live series, in the genre of basketball games, and among all the games I’ve played, period. Whenever I fire it up – such as I did when covering it for our 20th Anniversary of NBA Live content – the memories come flooding back as soon as I hear that main menu music.

NBA Live 96’s soundtrack was primarily instrumental, kind of a blend of jazz and rock. Whenever I hear it, I remember playing through my Chicago Bulls season with Michael Jordan…who finally had proper bio stats, thanks to an editor I found at a website called the NBA Live Series Center (you may have heard of it). I remember all the time spent making roster updates for the game, the feeling of creativity, the thrill of discovering patching for the first time. I love that game, and I love its music.

Speaking of basketball games from the mid 90s, I’d suggest that the themes from NBA Jam and NBA Jam Tournament Edition are somewhat iconic. Not to the same extent as the themes of Super Mario Bros, The Legend of Zelda, and so forth, but if you played Jam growing up, you’ll instantly recognise the main title themes.

It’s a real pump-you-up, getting-you-ready-to-play type of theme. In addition to the original theme, there’s also the remix for Tournament Edition on Super Nintendo, and the new CD-quality theme for the PC version. The PC version also features music during gameplay, which I really like as well.

You may have caught my retrospective of World League Basketball (also released as NCAA Basketball and Super Dunk Shot) in a previous edition of Wayback Wednesday. It features some classic early 90s sports video game music as its main theme, and on its various menu screens. Here’s an extended loop of the title theme that I created for use in the aforementioned video retrospective:

While we’re talking about games from that era, I have to mention Michael Jordan in Flight. It’s a game that I’m actually planning on talking about in more detail in a future Wayback Wednesday retrospective, but in the meantime, it’s worth throwing out there as another example of memorable early 90s basketball video game music. The title theme captures the era pretty well, and adds a little extra excitement to what was – for the time – a pretty cool intro.

Up until the turn of the millennium, NBA Live’s soundtracks were still primarily comprised of original tracks, mostly instrumental and usually with a jazzy/pop/rock sound. While it might not be a popular approach today, I feel those tracks really fit well with the games. They were good background music to have in the menus: up-tempo, but not over the top, fading into the background, but without being bland or forgettable. Here are a couple of my favourites from NBA Live 98 and NBA Live 99, respectively.

Beginning with NBA Live 2000, EA Sports began moving away from original scores, and licensing songs for their soundtracks, a practice both they and 2K Sports have continued to this day. That’s not a bad thing – unless you don’t care for the playlists that have been chosen, of course – but I do kind of miss those instrumental tracks. Although, by partnering up with Rahzel, EA did give us this gem from the Live 2000 soundtrack:

Judging by some of the comments on YouTube videos of songs from more recent games, it seems that licensed music still inspires feelings of nostalgia. I have to admit, tracks from NBA Live 2003 and NBA Live 2004 do make me feel a little nostalgic, but nothing takes me back quite like the music of basketball games from the 90s. If I did have to pick a licensed track that I’m really nostalgic for, it’d definitely be Fort Minor’s “Remember the Name”, which was featured in one of my all-time favourite games, NBA Live 06. Hey, it’s ten years old now; surely, that’s old enough for Wayback Wednesday!

While I’ll stop short of agreeing that the soundtrack makes or breaks a basketball video game, it certainly can be that little extra something that makes them especially memorable…for better or worse. What are some of your most nostalgic tracks from basketball video games?

Those games are going way back! LOL

That’s the name of the game for Wayback Wednesday. 😉

Traz Damji instrumentals was great, because had that climate, even today I like to listen some of this songs especially “Paint Dance” from NL 98 and “1999 Funk ST” from NL 99.