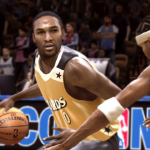 This is Wayback Wednesday, your midweek blast from the past! In this feature, we dig into the archives, look back at the history of basketball gaming, and indulge in some nostalgia. Check in every Wednesday for retrospectives and other features on older versions of NBA Live, NBA 2K, and old school basketball video games in general. You’ll also find old NLSC editorials re-published with added commentary, and other flashback content. This week, I’m taking a look back at Online Team Play.

As the years have gone by, the online experience has become more and more significant in basketball video games. I personally didn’t have a lot of interest in online modes for many years; a slower connection didn’t help matters, and for the most part, I was simply more interested in the offline experience. That’s changed somewhat over the past couple of years, as I’ve come to enjoy regular games of 2K Pro-Am. However, there was another online mode that caught my attention almost a decade ago, and appropriately enough, it was the forerunner to the Pro-Am concept: Online Team Play in the Xbox 360/PlayStation 3 version of NBA Live 08.

At the time, it was something of a groundbreaking addition for basketball video games, and a concept that both EA Sports and Visual Concepts should perhaps think about implementing once more. Let’s take a look back…way back…

Online Team Play wasn’t the only new addition to the online experience in NBA Live 08, as it was also the first game in the series to feature Online Leagues. Prior to that, online basketball gaming was generally limited to single head-to-head games, either against friends or random opponents via matchmaking. Online leagues did exist, but the commissioners and players had to do a lot more leg work in terms of keeping track of stats and results. While that first Online Leagues mode was primitive compared to what NBA 2K does these days with MyLEAGUE Online, it filled a need, and was a step forward for online basketball gaming. However, the gameplay experience was still more or less the same as single head-to-head games.  For that matter, it wasn’t much different to the average offline multiplayer (or single player) experience, except for the input lag. Enter Online Team Play, which changed things up by allowing up to ten players on ten different consoles to join in a game, each controlling a single player. This meant that you weren’t always going to be in control of the action, and thus needed to work as a team to be successful. Obviously, this is something we’ve come to expect from modes such as 2K Pro-Am and LIVE Pro-Am, but at the time, it was an exciting development.

There are some interesting differences to Online Team Play when compared to the experiences that are currently on offer, however. Whereas we now play with our own avatars in modes such as LIVE Pro-Am, 2K Pro-Am, and MyPARK, Online Team Play featured the current NBA squads, and thus we assumed control of a real player. The CPU took control of any players that weren’t selected by a user, as is the case now. However, when there were less than five users on a team, player locking was actually optional, allowing users to switch between players if desired. It was definitely something new, and fun.

It’s fair to call that first incarnation of Online Team Play bare-bones. Games are unranked, there’s no stat tracking game-to-game, and you can’t join any organised squads. However, the limited scope of the mode is partly due to the fact that it wasn’t implemented in NBA Live 08 at launch. A patch, announced in October and subsequently released in December, actually added the mode to the game, basically as a teaser of things to come. It wouldn’t be until the following year in NBA Live 09 that Online Team Play would feature clubs, ranked matches, and be available out of the box.

Still, it was the first time that a brand new mode had been added to NBA Live. Up until that point, new content had been added to the game in terms of roster updates, and there had been official patches that addressed gameplay issues and technical problems. As far as adding a significant feature post-release was concerned, arguably the closest EA Sports had come was implementing the lockout-shortened 50-game schedule into NBA Live 99. Needless to say, the addition of Online Team Play – again, already in the works but not quite ready in time for NBA Live 08’s launch – was a much bigger deal than an updated schedule and extra setup option. Despite its limitations, Online Team Play proved to be a fun addition to NBA Live 08, even for gamers like me who aren’t traditionally big fans of the online experience. I remember us organising a few meet-ups for OTP sessions, often in cooperation with Pastapadre. Being less experienced with online basketball gaming at the time, I remember feeling frustrated as I tried to adapt to the lag and the style of play, but I also recall really enjoying myself. One of my favourite moments would have to be a game in which JaoSming and Pdub dropped out due to unexpected connection issues, and I somehow managed to win solo while locked to controlling the point guard.

From its revamping into adidas LIVE Run in NBA Live 10 and the introduction of the similar Crew Mode in NBA 2K10, to the evolution of the concept into LIVE Pro-Am and 2K Pro-Am in the latest releases, Online Team Play’s approach to online cooperative multiplayer has become bigger than ever, especially with NBA 2K’s foray into eSports. However, I’d actually like to see the original concept return as an alternative to the current experience. It’d be fun to inject a little more NBA content back into those online modes, and a fun change of pace to be able to play with real players, as well as forego player lock when there are less than five users on a team.

Unfortunately, that seems unlikely to say the least. The concept has evolved since then, and today’s approach of playing with our own avatars from the respective career modes is likely far more popular. Even if its day is done, the original Online Team Play mode in NBA Live 08, along with its follow up in NBA Live 09, still stands as a groundbreaking addition; an important development in the online basketball gaming experience. Primitive and basic though it may be, Online Team Play should be recognised for paving the way for modes that have become a big part of basketball gaming, and with the continued rise of eSports, may soon be even bigger.