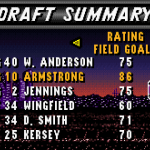 As I discussed in a previous edition of Wayback Wednesday, league expansion can lead to some unique features being added to NBA video games. Such was the case with NBA Live 96, with the league’s expansion across the border into Canada and the addition of the Vancouver Grizzlies and Toronto Raptors. When the Grizzlies and Raptors joined the league twenty years ago, an Expansion Draft was held to help them fill out their rosters, as is the norm. The twenty-seven other teams were able to protect eight players, which needless to say limited the pool of available talent outside of the deeper squads.

In most versions of NBA Live 96, the rosters were updated for the 1996 season with Class of 1995 rookies and offseason transactions. This wasn’t the case with the Super Nintendo version of NBA Live 96, which was missing the rookies (though there were codes to unlock them, along with Michael Jordan, Charles Barkley, and some bonus Legends), and also did not account for major moves like the Chicago Bulls’ acquisition of Dennis Rodman, nor the results of the Expansion Draft. What the SNES version of NBA Live 96 did have was the unique feature of the Expansion Draft itself.

When setting up the rosters for the first time, the game presents you with the option of drafting for Toronto, Vancouver, both teams, or automating the Expansion Draft entirely. You might think that simulating the Expansion Draft would use the real results, but that wasn’t the case; choosing the Automatic Draft option instead randomly selected players from the twenty-seven other teams. Although the game generally selected bench players – most of whom were not protected in reality – it was quite possible to see starters and sixth men plucked from their teams. If you wanted accurate rosters, you would need to manually draft for both Toronto and Vancouver. For those interested in the actual results of the 1995 Expansion Draft, you can find them here on Basketball Reference. It should be noted that all of the players who were drafted by the Raptors and Grizzlies are actually in the SNES version of NBA Live 96, so it’s quite possible to accurately re-create the Expansion Draft, pick by pick, player by player. As noted above, offseason transactions were also missing, as were the Class of 1995 rookies, so if you wanted to play with updated rosters, you had some work to do.

You may be wondering why that was the case. Let me assure you, it wasn’t laziness, which is the go to answer all too often these days. No, this one is on the NBA and the players union. It’s often overlooked that there was a lockout during the offseason of 1995, probably because unlike the lockouts before the 1999 and 2012 seasons, no games were ultimately lost as a result of it. However, a good chunk of the offseason certainly was, as the lockout was in effect from July 1st to September 12th, 1995.

The Super Nintendo version of NBA Live 96 was released in October of 1995, a month after the lockout ended. I don’t have the exact date for when NBA Live 96 went gold and the rosters were finalised, but we can safely assume that it was before September 12th and the end of the lockout. The result is final 1995 season rosters, no Class of 1995 rookies, and the Expansion Draft left unaccounted for, presumably because the resulting player movement wasn’t official until the lockout was over. The workarounds were codes for the missing players, and an Expansion Draft function to create the rosters for the Raptors and Grizzlies. And you know what? It was probably the best course of action, given that this was well before the age of official rosters and other post-release updates. It’s a little strange that they didn’t just make the automated results match the real Expansion Draft, but since those players hadn’t officially joined the Grizzlies and Raptors yet, perhaps there was an issue with doing so. As it stands, they were walking a fine line with the codes that unlocked players, and from memory, the NBA wasn’t too happy that they did that. Other versions of NBA Live 96 came out later and included updated rosters (minus His Airness and Sir Charles), so they didn’t need to include the Expansion Draft.

Now, it can be assumed that with enough rolls of the dice (so to speak), it would actually be possible for the game to generate the real results of the 1995 Expansion Draft. Someone who’s far better than me at Maths can probably work out the odds on that one. However, while there are unusual and undesirable results – Jalen Rose was taken by the Grizzlies in one of my test runs while writing this article – some of the players who were picked in the Expansion Draft do get chosen by the game, though not always by the correct team. It makes me wonder if those players have better odds of being chosen, or the real results are actually programmed into the game, with a slim chance of them being used when selecting the auto draft option.

At the end of the day, it’s kind of fun that they included the Expansion Draft in the SNES version of NBA Live 96. It was something extra to do in the game, and obviously offered a means of re-writing history as well, if you so desired. Basketball video games were only just starting to get deeper and more sophisticated at that time, and roster editing functionality was still in its infancy. Therefore, the Expansion Draft making it into the game was pretty cool, in my opinion. The SNES release certainly wasn’t the definitive version of NBA Live 96. That would be between the PC and PlayStation versions, a contest that I’d suggest the PC version wins due to its sharper graphics, Create-a-Player functionality, and the ability to be patched by the community. However, the inclusion of the Expansion Draft – a feature that hasn’t been represented in NBA Live since – undoubtedly makes the Super Nintendo version of NBA Live 96 noteworthy in its own right.

This is what actually got me into roster editing way back when!

I used to get a basketball news paper in England called “Slam Dunk” which had the rosters for the up and coming 96/97 season so I decided to put the Raptors and Grizzlies players on the correct team then I thought why stop there and did all the teams!

Toronto was also my first non knicks dynasty u ever did top following this.

That’s pretty much how I made my early roster updates for NBA Live as well, with season preview magazines and news from NBA Action each week!

I don’t like to think of the money I’ve spent on Pontel tapes and DVDs over the years. Probably best not to, though there’s worse stuff I could’ve spent my money on. No regrets, at the end of the day. 😉

Getting those NBA Action episodes was a nice bonus. There are also some complete episodes of NBA Action on YouTube, from around that era. It’s a shame the show is a shadow of its former self – it definitely lost something when Jim Fagan left – but I guess it’s not as important and kind of a relic with League Pass and YouTube, and up to the minute news through apps and websites. Still, very nostalgic all the same.

Yeah no regrets at all mate!

When I first started out watching the nba in 90/91 there was one pre recorded game a week which was usually Bulls/Lakers/Pistons/Celtics so when I fell in love with the knicks during the 91 playoffs vs the Bulls.

Used to save up pocket money and use birthday/xmas cash on Pontels till I was working at 16 then I was ordering 2 a week, nothing more pleasing than coming home to a brand new Pontel in the post lol

Ah, the pre-recorded weekly game. Quite often they’d put it on late at night here in Australia, so I’d either set the VCR, or when I got a bit older, stay up late to watch it. The anticipation, wondering which game it would be!

Of course, I’d always hope that it was a Bulls game. I remember being faked out once when during the intro, the voiceover asked “Can anyone stop the Bulls? Not these bulls, (footage of actual bulls), these Bulls! (footage of the Chicago Bulls)” At this point, I’m thinking awesome, a Bulls game! Then the voiceover said “Well, these teams are going to try!” And it was a game between the Hawks and Pacers, or possibly the Hawks and Hornets; I remember the Hawks playing in that game, at least. I enjoyed the game regardless, but man, that was a disappointing fake out!

Very nice article Andrew! This game brings a lot of memories to me. My uncle and brothers were so inlove with this game that during weekends we will start playing 8pm and sadly end it at 4am (or until we hear our grandma shouting to stop playing). We were arguing who to draft but came to an agreement to base it on real life. I even downloaded an SNES emulator to play this once in a while (and hear the sound of “Three!”). What I also really liked with this game is the part where the hidden player’s attributes-details will come up when you put in the last name of some of the drafted rookies, MJ and Barkley. I hope they can do that in future NBA Live games as a sort of secret players.

Thanks for checking in, and sharing some memories of your own. Glad you enjoyed the look back!

I did touch on the hidden players here, but I will write about them in more detail in a future article. It’s highly unlikely to happen again, though. As I said, from memory the NBA wasn’t too happy that EA did it 20 years ago, and likeness rights are even more of a contentious issue these days. Just look at the tattoo artists who are suing Take Two for what they claim is unauthorised use of their work in NBA 2K, with some of the players’ tattoos. With the lawsuit against EA and the NCAA over the college games from former players, EA would never risk anything like that these days.

No doubt. I’m definitely enjoying doing the Wayback Wednesday for the nostalgia factor, and a way to get into doing some video content. Though I do also want to do more video content for the current games, too!