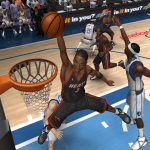 Welcome to Wayback Wednesday, your midweek blast from the past! This is a feature where we look back on yesteryear, dig into the archives, indulge in some nostalgia, and in some cases, wonder just what we were thinking. Check in every Wednesday for features and retrospectives on old basketball video games, old NLSC feature articles and editorials published as-is with added commentary, and other flashback content.

This week, we’re tipping off the new Wayback Wednesday feature with an article from ten seasons ago, when Dwyane Wade was a rising star on the way to his first NBA championship. Wade’s heroics in the 2006 Eastern Conference Finals had punched the Miami Heat’s ticket to their first NBA Finals appearance, and in doing so, he became the third player to reach the championship round the same year as gracing the main cover of NBA Live. Before the Finals tipped off, I wrote an article noting the distinction, and wondering whether he would indeed become the first main NBA Live cover player to win a title in the same year.

Wade One of NBA Live’s Most Successful Cover Players

NBA Live may not carry the same “cover curse” that has seen NFL players struck down by injury the same year they appeared on Madden’s box, but so far no player has won the NBA championship the same season their likeness has graced NBA Live’s cover. The Miami Heat’s Dwyane Wade could soon change that.

With the Heat’s Game 6 victory over the defending Eastern Conference champion Detroit Pistons, Wade becomes just the third player to advance to the NBA Finals in the same season he appeared he on the cover of NBA Live. Already a standout player and two-time All-Star, Wade’s selection as the cover player for NBA Live 06 would seem particularly apt should the Heat win the championship. After all, who better to represent the 2005/2006 season than the young star player who took his team all the way? It seems fitting that Flash’s performance in the Eastern Conference Finals seemed to come straight out of a video game. Against one of the toughest defensive teams in the league Wade shot 58-94 (61%) from the field whilst averaging 26.7 ppg, 5.2 rpg and 5.5 apg. Through the first four games of the series he averaged over 30 ppg on a blistering 69% from the field. Battling the flu in Game 6 he turned in 14 points and 10 assists as the Heat advanced to the final round for the first time in franchise history.

Before Dwyane Wade, the most recent player to lead his team to the NBA Finals the same year as appearing on the NBA Live cover was New Jersey’s Jason Kidd in 2003, though the Nets would fall to the Spurs 4-2. Like Kidd, Wade finished in the top ten in MVP voting this year and had a fine all around season receiving All-NBA Second Team honours and representing the East at the All-Star Game. Should Wade and the Heat succeed where Kidd and the Nets did not, he will have completed the best season for a player appearing on the NBA Live cover that same year.

The task won’t be easy however. With Dirk Nowitzki and the Dallas Mavericks also advancing to the NBA Finals for the first time in club history the Heat will have to maintain the form that carried them past the Pistons if they want to successfully cap off what has turned out to be an outstanding Playoff run. No doubt both teams are ready and willing to prove their mettle when the NBA Finals tip off June 8th in Dallas.

Dwyane Wade did indeed go on to win his first NBA championship in 2006, in turn becoming the first player to win the title in the same year he appeared on the main NBA Live cover. At the same time, Shaquille O’Neal became the first player to appear on the NBA 2K cover and be an NBA champion in the same season. As mentioned in the original article, Shaq was also a former NBA Live cover player, as was Antoine Walker.

Although the 2006 NBA Finals wasn’t without controversy, Wade had a spectacular series. He followed up his strong performance in the Eastern Conference Finals with a line of 34.7 ppg, 7.8 rpg, 3.8 apg, 2.7 spg, and 1 bpg, as the Miami Heat defeated the Dallas Mavericks in six games. Unsurprisingly, he was named Finals MVP, adding another achievement in a season in which he made his first All-Star start, was named to the All-NBA Second Team, and finished sixth in MVP voting.

Wade remains one of the most successful players to grace the cover of NBA Live, and to date, is the only player to win the championship the same year as appearing on the main cover. I’m making special mention of him being the “main cover” player now, as I neglected to mention the international covers in my original article. Technically speaking, Tony Parker was actually the first player to appear on an NBA Live cover and win the title in the same season, when he graced the French cover of NBA Live 2005 the year before.

Since then, Pau Gasol appeared on the Spanish covers of NBA Live 09 and NBA Live 10, years in which the Los Angeles Lakers won back to back championships; Kobe Bryant was also the NBA 2K10 cover player, coinciding with the 2010 title. Tony Parker appeared on the French cover of NBA Live 07 (alongside Boris Diaw, then of the Phoenix Suns), the year the San Antonio Spurs won their fourth Larry O’Brien trophy. LeBron James also appeared in the 2014 NBA Finals as a member of the Miami Heat, the same year he graced the NBA 2K14 cover, though his Heat fell to the Spurs in five games.

Looking back, this was a fun piece to write, the kind of feature I’d like to run a little more often here on the NLSC. In the meantime, that concludes our trip down memory lane; I hope you enjoyed it! If you have any thoughts on this week’s feature, or have a suggestion for a future Wayback Wednesday topic, hit me up in the comments section below.

Nice article, and nice memories, though I’m mainly an NHL fan I enjoyed many NBA seasons thanks to your forum and to these great videogames and mods!! I’ve here on a shelf the box of NBA 06, it was really a great game, though I found too easy to score on alley hoops, hadn’t been for this aspect I’d rate this game one of the best sport game ever!!

Certainly still one of my favourites. Thanks for checking in, glad you enjoyed it!