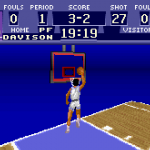 As promised, I have a new video retrospective for this week’s Wayback Wednesday! Today, I’m taking a look back at an old favourite of mine that I’ve wanted to talk about in more detail for some time now. It’s a basketball game for the Super Nintendo called World League Basketball…well, the game that I own is called World League Basketball, anyway. Depending on where you lived when this game was released in 1992, you might have known it as NCAA Basketball, or perhaps Super Dunk Shot.

It’s a game that was, in some ways, ahead of its time, and it’s definitely worth reminiscing about. With that said, let’s take a look back…way back…

Check it out here on our YouTube channel if you can’t see the embedded video. Stay tuned for more video retrospectives, columns, stuff from the archives, and other Wayback Wednesday content!

I grew up playing NCAA Basketball for the SNES. A game with underrated gameplay for it’s time. I would use Georgetown, Naylor at center and Tapp coming off the bench, jacking threes with Larson. Truly ahead of it’s time.

Two games I played when I was younger that I think you would like to do one of these segments on. NCAA Final Four basketball by COOLROM, and NCAA Final Four 99 with Paul Pierce on the cover and Quinn Buckner doing the commentary. Both of those game have a place in classic basketball game history. Don’t forget NBA Fastbreak 98 as well, the first basketball game made by Visual Concepts, and NBA in the Zone 2.. which had hidden legends and solid gameplay. Also, Coach K College Basketball, College Slam (College equivalent of NBA Jam, it was a deep game where you could even change your players names… You could also change your players names in NCAA Final Four Basketball by CoolRom), and Dick Vitales AWESOME BABY college basketball (Similar format to this game). I owned all the basketball games in my comment and more!

Love these videos, keep up the great work!

The Chicago Breeze were my team of choice in World League Basketball, hence why they show up a couple of times in the video, and why I use the name in Ultimate Team and MyTEAM. 🙂

I don’t have all of those games at this time, but I’ll definitely keep them in mind. Thanks for the kind words, glad you’re enjoying the videos! It’s definitely fun to do something new with our content since we haven’t done a lot of videos in the past, and there are some interesting games to look back on. I want to do some video content with newer games as well, including the current ones of course, but I’ll certainly keep doing some retrospectives for Wayback Wednesday.