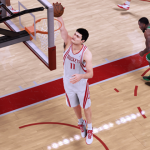 On this day in 2011, Hall of Famer Yao Ming announced his retirement from the Houston Rockets and the NBA. It brought an end to a career that was unfortunately marred by injuries, but was nevertheless successful, and marvellous to watch. While he wasn’t the first player over 7’3″ to find a home and make a legitimate contribution in the NBA, he remains the only one to achieve true superstar status. Only Rik Smits comes close, and that comparison still greatly favours Yao, to say the least. On the court, he was so much more than just an attraction, an oddity, or another very tall player.

Just as Yao Ming was a star on the court, so too did his digital counterpart find success on the virtual hardwood. Yao was a handy player to have in a Dynasty or Association game, with his combination of height and skill making him a very formidable opponent in the paint. Since it’s the anniversary of his retirement, I thought I’d take a look back at Yao Ming’s history in basketball video games, offering up a few tidbits about his virtual counterpart, and providing a few screenshots through the years.

Yao Ming was the first overall pick in the 2002 NBA Draft, and immediately made the jump to the NBA for the 2003 season. Well, immediately perhaps isn’t the most appropriate word. There were a few issues that needed to be sorted out before Yao could sign his NBA contract, which unfortunately didn’t happen until after the roster cut-off dates for the console version of NBA Live 2003, and NBA 2K3. The PC version of NBA Live 2003 had a later cut-off date however, so it was in that release that Yao Ming made his basketball video game debut. His official basketball video game debut, at any rate. As such an exciting and highly touted prospect, a lot of basketball gamers were eager to play with him before the new games came out. The NLSC roster updates naturally added him to the PC version of NBA Live 2001, while those of us with NBA Live 2002 on PlayStation 2 or the original Xbox also rushed to add him to the game. I remember there being significant interest in playing some Franchise games with the Houston Rockets that year, what with the new one-two punch of Yao Ming and Steve Francis.

As I mentioned, Yao was added to the PC version of NBA Live 2003, which came out after the console versions. Notably, his name was actually entered into the database “backwards”, with Yao as his surname, and Ming as his first name. While this is technically correct – Yao is actually his family name – it meant that his name was displayed in-game as “Ming Yao”, following Western naming conventions which place given names before surnames. This was obviously done so that “Yao” could appear on the back of his jersey, as it did in real life.

Interestingly, future games correctly displayed his name as Yao Ming, with Yao listed as his first name and Ming as his surname in the database. However, they also correctly displayed “Yao” on the back of his jersey, rather than “Ming”. This would suggest that there is a hidden value or attribute somewhere that makes an exception for Yao, but to this day, I haven’t been able to find it. As such, when I created Yi Jianlian in the NLSC roster updates after he was drafted in 2008, I had to make the same “mistake” that EA Sports did in NBA Live 2003, just to get the proper name to show up on the back of his jersey. Another noteworthy quirk about video game Yao Ming is his three-point rating. In a few NBA Live releases, it was definitely a lot higher than it should’ve been. The real Yao went one-of-two from long range in his rookie year, and then didn’t make another triple until the 2009 season, finishing his career two-of-ten from downtown. Despite that fact, he had a three-point rating of 76 – on the in-game 50-99 scale, with a rating of 52 in the database – as a rookie in NBA Live 2003 PC. Similarly, he had three-point ratings of 35, 33, and 50 in NBA Live 2005, NBA Live 06, and both NBA Live 07 and NBA Live 08 respectively (0-99 scale). It was definitely a strange oversight.

Even if you didn’t take advantage of his inflated three-point ratings, Yao Ming was a dominant weapon to have in basketball video games. Just as in real life, his high level of skill combined with his skyscraper frame allowed gamers to bully opponents at both ends of the floor. While the mismatches virtual Yao created certainly weren’t unrealistic, there were times when the games inched away from reality. Yao wasn’t a tremendous shot blocker compared to other players of his size like Mark Eaton or Manute Bol, but it was often quite easy to get blocks with him in video games simply due to his height. Apart from that, however, Yao’s brilliance was certainly realistic.

Bottom line, Yao Ming was an often dominant and coveted player in basketball video games. He didn’t just have an impact in the simulation titles, either. When EA Sports rebooted the NBA Jam franchise in 2010, Yao was one of the players chosen for the all-new boss battles. In that mode, Yao truly was a giant in the most extreme sense of the word, with the object being to shrink him down to size by scoring against him as much as possible. The real Yao Ming didn’t actually stand taller than the ten foot rim – or indeed, the entire backboard – but to his smaller opponents, at times it probably felt like he did. Whenever a player’s career is shortened and hampered by injuries, there’s always an element of “what if”. I think that most of us would agree that Yao’s numbers and impact on the NBA game could’ve been even greater had he not been plagued by injuries for most of his career following the 2006 season. Who knows how many years the Houston Rockets could have been legitimate contenders, and given us some really memorable Playoff series. As with so many “what if” scenarios, basketball video games have provided us with a chance to play them out, and I’m sure that a lot of gamers have enjoyed a great deal of success with Yao Ming on their teams.

Nevertheless, the real Yao Ming had a fine career, in my view definitely earning that Hall of Fame nod. His final appearances as an active player were in NBA 2K11 and the 2010 reboot of NBA Jam, but he remains playable today. He’s available in NBA 2K16 as a member of the 2008 Rockets, and his card has been made available in MyTEAM; likewise, he’s a collectible Legend in NBA Live 16’s Ultimate Team. Although his NBA career undoubtedly ended much sooner than he or his many fans around the world would’ve liked, through basketball video games, The Dynasty lives on.

There were a few games in the PS2 generation where players would warp up on blocked shots and some rebound animations. Yao’s height could put him up around the top of the board when that happened, yeah.