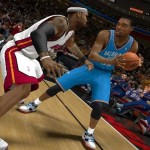 The Wii U version of NBA 2K13 has received the official patch (v1.02) that was made available for the Xbox 360 and PlayStation 3 versions of the game last month. The patch contains several tweaks, fixes and updates for gameplay, MyCAREER and Association, and will be pushed through automatically as long as your console is connected to the Internet. For a laundry list of all the fixes, please see below.

There is still no word on the patch for the PC version, beyond Ronnie 2K’s speculation that the PC will be receiving a combined update once all the planned updates for the console versions have been released.