WNBA Expanded Upon in NBA 2K21 Next Gen 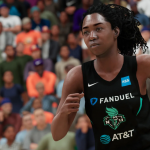 During the preview season for NBA 2K21 Current Gen, it was mentioned that the WNBA would have a much larger presence in the Next Gen version. The latest developer blog has revealed that the league will be represented by three modes in NBA 2K21.

The first mode is MyWNBA, which is a fully-featured franchise mode for the WNBA. It includes similar customisation to MyLEAGUE as far as teams, rules, and finances, and also comprises online leagues and a leaderboard. There’s also a standalone Playoffs mode, and role-playing elements from the GM’s perspective.

A career mode has also been added in the form of The W. Interestingly, there are no microtransactions, with progression determined solely by playing games. Gamers start by choosing a player type, and then customising their player’s physical attributes and Takeover, similar to a MyPLAYER on the NBA side of things. There are also on-court and off-court tasks that contribute towards increasing your popularity, the overall popularity of the league, and personal wealth.

Finally, The W Online is a 3v3 online multiplayer mode, with games played to 21 under street rules. As with the connected experiences in MyCAREER, MyPOINTS earned in The W Online will count towards the overall progression of your player. Games take place in their own special arena, and progressing through the mode unlocks animations and clothing.

Be sure to check out the blog for the full scoop on how the WNBA’s presence has been increased in NBA 2K21 Next Gen! 2K has also released a trailer for The W, which you can watch below. Add your thoughts in the comments, and join in the discussion here in the Forum.

WNBA Trailer: The W in NBA 2K21 Next Gen