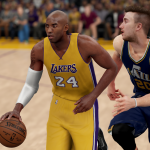 This is Wayback Wednesday, your midweek blast from the past! In this feature, we dig into the archives, look back at the history of basketball gaming, and indulge in some nostalgia. Check in every Wednesday for retrospectives and other features on older versions of NBA Live, NBA 2K, and old school basketball video games in general. You’ll also find old NLSC editorials re-published with added commentary, and other flashback content. This week, I’m taking a look back at ten longevity records players have set on the virtual hardwood.

With the Atlanta Hawks’ 2020 season officially over, Vince Carter has officially retired after 22 seasons in the league. The player once dubbed Half-Man, Half-Amazing, has certainly had a wholly amazing career. Beyond his breathtaking dunks, 360 layups, and other highlights, Carter set new marks for longevity, not only by playing the most seasons in NBA history, but also becoming the first player to appear in four different decades. Not bad for a player who briefly gained a reputation – albeit one that was somewhat overblown – for being fragile and constantly injured!

Needless to say, Vince Carter’s lengthy NBA career has set a few records in video games as well. However, he’s not the only player who holds some longevity-based distinctions on the virtual hardwood. I ran through these in Episode #329 of the NLSC Podcast, but I know that audio content isn’t for everyone, and it pays to have trivia like this written down as well. These records span many years of basketball gaming, so let’s take a look back…way back…

Most Consecutive Years in Games as an Active Player: Vince Carter (22) 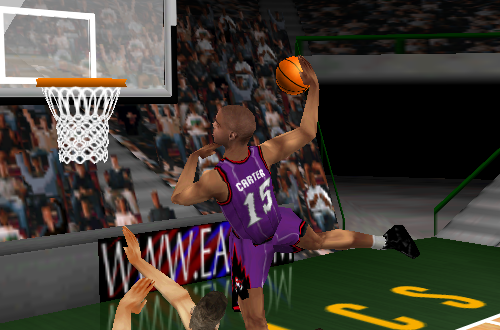 This one shouldn’t come as a surprise. After all, the entirety of Vince Carter’s record-setting career overlaps with annual sim title releases, so his 22 years in the NBA has also resulted in 22 consecutive years of appearing as an active player in video games. Now, there was a Kotaku article discussing Vince Carter in video games through the years that referred to his absence from the 1999 season games due to the lockout, but that isn’t entirely accurate. Carter was added to NBA Live 99 PC in an official roster update, and some games (such as NBA Pro 99/In the Zone 99) had a second run with updated rosters for the 1999 season, which included Vinsanity and the Class of 1998.

Last Player from the 90s Active in Games: Vince Carter 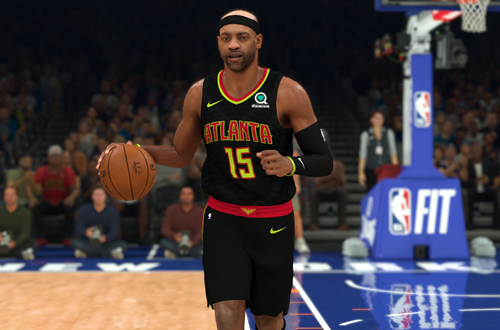 Still on Vince Carter, his longevity in the NBA has made him the last active player from the 90s, and that obviously carries across to the virtual hardwood as well. It’s amazing to think that he debuted in the NBA during the fifth generation of consoles, and was still playing as the release of the ninth generation looms! Due to NBA Live taking another hiatus, NBA 2K20 stands alone as the only game to represent Carter’s final year in the league. Of course, as NBA 2K has no 1999 season release, it doesn’t encompass his rookie season as Live does. Still, between NBA Live and NBA 2K, we can play Vinsanity’s entire career from the end of the 90s right through to 2020.

Last Player from the 80s Active in Games: Cliff Robinson 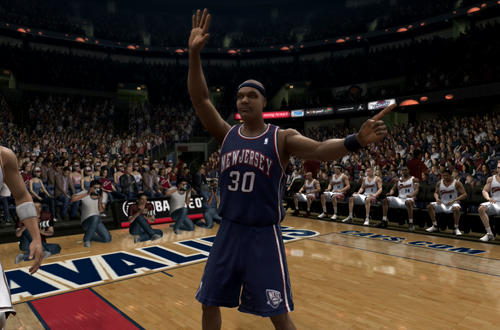 The 2007 season marked the final campaign for the two last players standing from the 80s: Kevin Willis, and Cliff Robinson. Willis’ comeback with the Mavericks made him the oldest player in NBA history, though two missed years – one due to injury, the other due to retirement – prevented him from setting a record of 23 seasons played. He’s also absent from the 2007 season games due to being signed late in the year. A note among NBA Live 08’s files indicates he was meant to be in the game, but was removed again upon retirement. That makes Cliff Robinson – drafted in 1989 and playing a final year for the Nets – the last 80s player to also be active in video games.

Last Player from the 70s Active in Games: Robert Parish 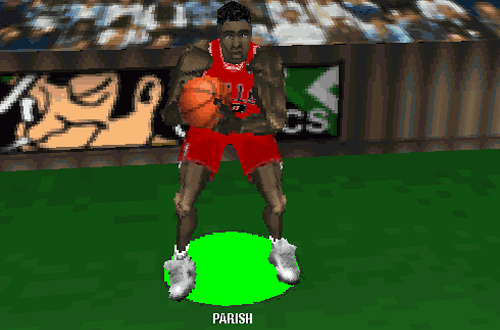 Robert Parish had one last run with the Bulls in 1997. He didn’t play much, but his presence on the roster earned him a fourth NBA championship, to go with the three he won as a teammate of Larry Bird and Kevin McHale on the 1980s Boston Celtics. The Chief was originally drafted by the Golden State Warriors in 1976, and while there were video games back then, there were no licensed NBA titles with real players. His single campaign with the Bulls makes him an active player in NBA Live 97 and other 1997 season releases, and thus the last 70s player to appear in video games while still in the league. Incidentally, James Edwards, drafted in 1977, retired a year earlier.

Last Player from the 60s Active in Games: Kareem Abdul-Jabbar 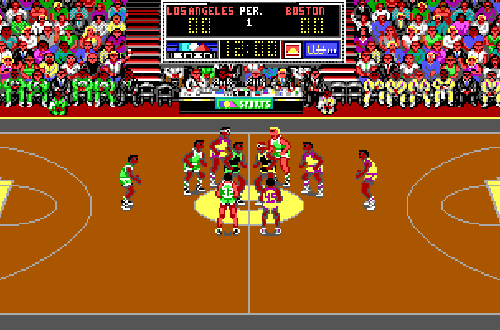 I actually forgot to mention this one on the NLSC Podcast. The top pick in the 1969 Draft, all-time leading scorer and master of the skyhook Kareem Abdul-Jabbar ended up playing twenty years in the NBA. That was long enough for him to appear in one video game as an active player. Appropriately enough, it was Electronic Arts’ Lakers vs Celtics and the NBA Playoffs, in which Kareem has his signature skyhook. His longevity in the league makes him the oldest player (as in the era he’s from) to appear in a game while still active. No one else from the 60s, nor the 50s or 40s for that matter, played long enough to appear in any capacity except as a retired Legend. 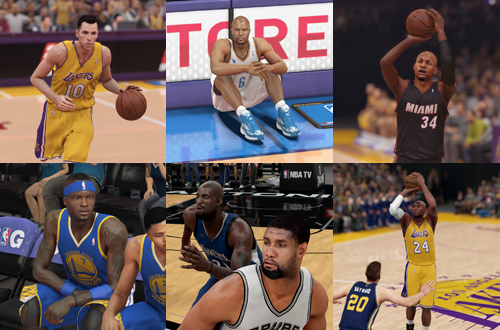 Vince Carter’s 22 seasons span four console generations, but that isn’t a record. A total of seven players – Kobe Bryant, Kevin Garnett, Tim Duncan, Ray Allen, Steve Nash, Jermaine O’Neal, and Derek Fisher – made their first active appearances in Super Nintendo games, and their last in PlayStation 4 and Xbox One titles; a span of five generations! Duncan’s Class of 1997 alumni Chauncey Billups and Stephen Jackson came close as they’re in NBA Live 98 PC, but not SNES. Also, Jerry Stackhouse and Kurt Thomas are honourable mentions, being in the active rosters in games for SNES all the way to PS4/X1, but were recent retirees in the Free Agent pool in NBA 2K14.

Most Years between Appearances as an Active Player: Michael Jordan (8) 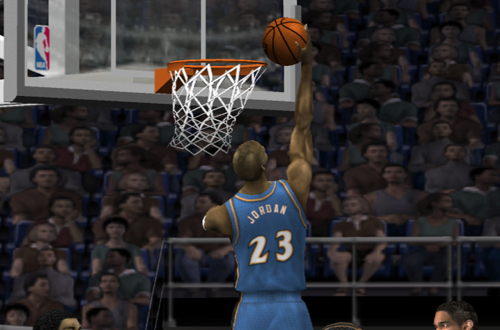 Not all longevity records are positive, of course. Due to his withdrawal from the NBA Players Association’s licensing deal, Michael Jordan was infamously absent from a majority of video games in the 90s. His last official appearance as a member of the Chicago Bulls came in NBA Showdown, the immediate precursor to the NBA Live series. He was either absent or replaced by a Roster Player following his return in 1995, and although he returned as a Legend in NBA Live 2000, he wouldn’t appear as an active player until his comeback with the Washington Wizards. His appearance in NBA Live 2002 and NBA 2K2 thus marked his first as an active player in eight years.

Most Years between Being Active in Real Life vs Games: Allan Houston (5) 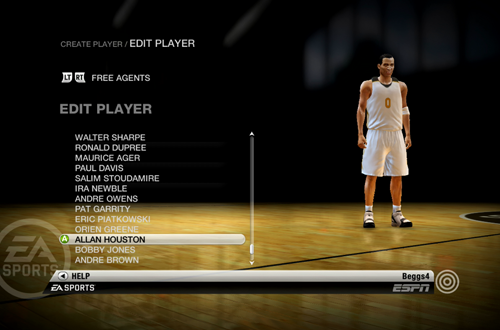 It isn’t unusual for players that retire during the offseason to appear in the free agent pool of the following game, and there have been instances of players remaining there for a couple of releases. It’s highly unusual for a player to still appear in the active rosters five years after they last played, but that’s the record set by Allan Houston, who is a free agent in NBA Live 10. There’s a reason for this, however. Houston attempted a couple of comebacks after retiring in 2005, and his 2008 attempt saw his inclusion in NBA Live 09’s roster. He remained there in NBA Live 10, thus setting an odd record for longevity as an active player in games while not playing in real life.

Most Years between Appearances as a Legend: Charles Barkley (12) 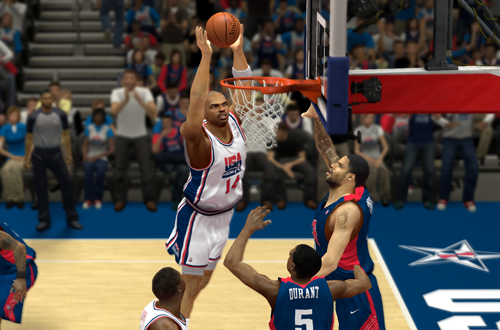 Charles Barkley is also absent from a number of games released in the 90s, though towards the end of the decade, he began making official appearances again. He was also featured as a Legend in NBA Live 2000 and NBA Live 2001, but after that, it was some time before he was included as part of a game’s historical content. Sir Charles has indicated his reluctance to appear stems from the unwillingness of the developers to make donations to the Retired Players’ fund, but he has relented on two occasions, appearing as a member of the Dream Team in NBA 2K13 and NBA 2K17. As such, the former was his first official appearance as a Legend in twelve years. 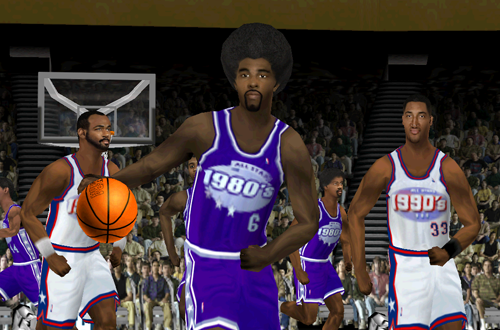 1983’s One on One: Dr. J vs. Larry Bird paved the way for all the licensed NBA video games that followed it. That’s why it’s funny to think that Julius Erving wouldn’t make an official appearance in another basketball video game for 16 years, when he was included as a Legend in NBA Live 2000 (released in 1999). You could say that he’s tied with former teammate Charles Barkley at 12 years as the Atari 7800 version came out in 1987, but that’s somewhat pedantic as it’s a port rather than a new game. His 1987 retirement was too early for Lakers vs Celtics, and the unlockable Dr. J in NBA Live 96 was unofficial, but the Doctor would eventually make another house call.

One longevity record that I included on the Podcast that I’ll note as an honourable mention here is that thanks to his 19 years in the league, and an exclusive deal with EA Sports for a couple of years, Shaquille O’Neal is the only player to appear in every NBA Live and NBA 2K title, either as an active player or as a Legend. Thanks to his longevity, and the longevity and interesting circumstances surrounding other players listed here, some names maintain a constant presence on the virtual hardwood, even as the face of the league changes through the years. It’s quite fun to play old titles and see these players evolve along with them, as many of their peers came and went.

Very thorough storytelling to comprehend in an instant. I wish there is gonna be more comments. I like to use Sir Charles in my NBA 2K13 @ Wii U, though)

It’s fun to see Barkley in those games, seeing as how it’s such a rarity.