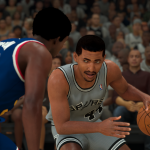 This is Wayback Wednesday, your midweek blast from the past! In this feature, we dig into the archives, look back at the history of basketball gaming, and indulge in some nostalgia. Check in every Wednesday for retrospectives and other features on older versions of NBA Live, NBA 2K, and old school basketball video games in general. You’ll also find old NLSC editorials re-published with added commentary, and other flashback content. This week, I’m taking a look back at how the ABA has been represented in basketball video games.

Despite its influence on the NBA and the sport in general, the American Basketball Association doesn’t have a lot of representation on the virtual hardwood. It makes sense as the National Basketball Association became the dominant “brand” when it exploded in global popularity in the 80s and 90s, by which point the ABA had long been absorbed in the 1976 merger. Although it’s not exactly forgotten, its history is somewhat glossed over in favour of celebrating the NBA’s heritage. Of course, that’s not altogether surprising; as the old saying goes, history is written by the winners.

Still, given that the NBA does pay homage to the ABA and adopted some of its ideas including the three-point line (though Abe Saperstein’s American Basketball League did it first), it’s strange that it doesn’t have much of a presence in video games. The ABA had been gone for around two decades when I was getting into basketball and basketball video games, but I recognise its importance and would love to see it celebrated in gaming as well. What have we seen so far? Let’s take a look back…way back…

In a way, the ABA is represented in just about every NBA video game that’s been made. There’s the aforementioned three-point line, adopted by the NBA in 1979 after it had been popularised in the ABA several years beforehand, but there are also the four surviving ABA teams: the Spurs, Nets, Pacers, and Nuggets. Any game that includes every single NBA team – which is to say, basically all of them from the mid 90s onwards – has links to the American Basketball Association by default. Legends that played in both leagues, such as Julius Erving, George Gervin, Rick Barry, and Artis Gilmore, are also celebrated through their inclusion as legends in modern titles. 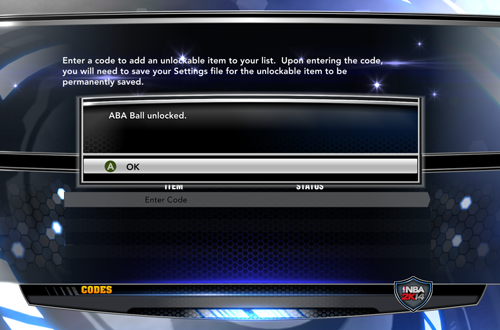 Of course, all of those aspects – the three-point line, and the teams and players with a lineage in the long-defunct league – are in NBA video games due to their connection with the National Basketball Association. When Dr. J was celebrated in NBA 2K12, it was as one of the NBA’s Greatest players. He’s appeared as a member of the 1977 and 1985 Philadelphia 76ers, not the Virginia Squires or two-time champion New York Nets. In fact, despite the wide variety of retro teams that have been added to NBA 2K in recent years, there hasn’t been an ABA squad. The Spurs, Nuggets, Pacers, and Nets each have a throwback squad in NBA 2K20, but they’re all NBA-era teams.

So, what authentic elements of the American Basketball Association have actually made it into basketball games? Well, there’s the league’s official basketball. The distinctive red, white, and blue ball has been present in many video games, usually as an unlockable or accessible via a cheat code. The ABA ball can be used in games like NBA Hangtime and NBA Street by punching in the right code as a game is loading. Up until NBA 2K14 on PC, PlayStation 3, and Xbox 360, it could be unlocked in the Codes menu, appropriately enough by entering the code “payrespect”. And of course, it’s the money ball in several games that have featured the three-point shootout.

Throwback jerseys have also honoured the ABA in video games, just as they’ve done on Hardwood Classics nights in the real NBA. The Spurs, Nuggets, Pacers, and Nets have naturally all paid tribute to their lineage by donning the appropriate throwback uniforms throughout the years. However, teams that don’t have roots in the American Basketball Association have also honoured teams they share a geographical location with, such as when the Heat wore the uniforms of the old Miami Floridians. These retro jerseys have been available to select in various games, mostly around the time they were being worn by those teams on Hardwood Classics nights in real life. 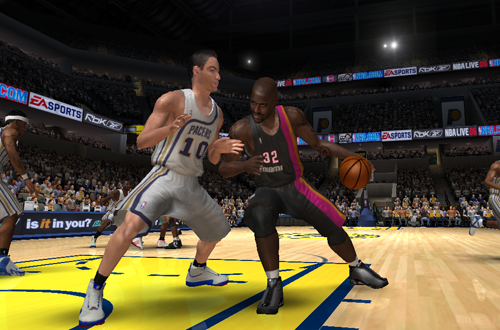 That’s basically it, though. All of the historical logos that you can unlock or use to create your own branding in MyLEAGUE and MyTEAM are from the NBA. A couple of the cities you can choose for your team in those modes did have teams in the American Basketball Association, but that’s likely just a coincidence. The old codes menu has also been phased out, so we’re no longer able to pay respect and unlock a red, white, and blue ball for regular play. It is available to collect and equip in both MyTEAM and your MyCOURT in MyCAREER, though. Aside from Dr. J’s jersey as player clothing, NBA Live’s current retro content is also NBA-oriented.

Upon reflection, this isn’t altogether surprising. The NBA owns all of the ABA’s trademarks, but the likeness rights for former players who never played in the NBA are a different matter altogether. It’s safe to assume that’s the largest hurdle when it comes to including any ABA squads among the classic teams. It might be feasible to secure the appropriate likeness rights, but the question is, would it be worth the time and money? The NBA-ABA merger was old news when I was getting into basketball, and it’s now an event that took place over forty years ago. I imagine it has limited appeal, especially with the current backlash against nostalgia and “old heads”.

It’s unfortunate, though. I’m by no means an aficionado when it comes to the ABA; I grew up watching the NBA, and all I saw of the ABA were the snippets of its history that were shared on those classic NBA home videos. I do have an appreciation for the history of the sport and the NBA however, so it was always interesting to learn about. In a time when it feels like a lot of people don’t want to believe that anything of importance happened before 2015, it would be nice if video games could serve as a teaching tool. We’ll always disagree about great players and golden eras, but it’s important to have an appreciation of history, and how the modern game was formed. 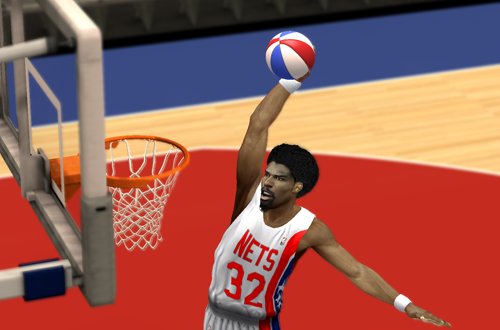 To that end, it’d be great if we could ever get some proper ABA content into NBA 2K. I guess the 80s and 90s are pretty retro as it is these days, especially to gamers who weren’t even born last century. There’s something about the American Basketball Association that makes it the quintessential image of old school hoops, though. The fashions of the 60s and 70s no doubt play a part in that, and the ABA was all about self-expression. NBA Street clearly tried to tap into that vibe with Stretch Monroe, the fictional face of the game. It’s only appropriate that when Stretch appeared in LIVE Events in NBA Live 19, he was rocking Dr. J’s number thirty-two Nets jersey.

Needless to say, our modding community has been able to create full retro ABA season mods for both NBA Live and NBA 2K, and celebrate the league with other kinds of historical rosters over the years. As always though, it would be great to see that kind of content make its way into the game in an official capacity. A few nods to the league in themed MyTEAM challenges are nice, but fully fleshed out retro content in the form of players and accurately branded teams would be fantastic. If nothing else, it’d be nice to get an option for that classic red, white, and blue ball back in Play Now games. It’d help keep that old school spirit alive.