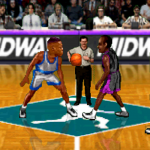 This is Wayback Wednesday, your midweek blast from the past! In this feature, we dig into the archives, look back at the history of basketball gaming, and indulge in some nostalgia. Check in every Wednesday for retrospectives and other features on older versions of NBA Live, NBA 2K, and old school basketball video games in general. You’ll also find old NLSC editorials re-published with added commentary, and other flashback content. This week, I’m taking a look back at another mistake that I’ve somehow managed to overlook for more than two decades now.

I won’t lie. When I realised I’d overlooked a mistake with Kevin Edwards’ portrait in the PC version of NBA Jam Tournament Edition for over twenty years, it blew my mind. You can’t imagine how many times I’ve fired up that game over the years, how many times I’ve cycled through all the teams’ rosters, and yet somehow failed to notice that he has Blue Edwards’ portrait instead. It didn’t click, even though I also own the Super Nintendo version of the game, and do recall Edwards having a different (and correct) portrait in that release.

Well, it happened again! This time, it was our own Eric (aka Q) that pointed out the mistake to me. The error can be found in NBA Hangtime, Midway’s successor to NBA Jam TE. I went back and double-checked just in case it had been fixed in the PAL version that I played, but no, the mistake is definitely there. As with Edwards’ incorrect portrait, it hardly ruins the game, but now that I’ve seen it, I can’t believe I overlooked it for all those years. Let’s take a look back…way back…

The mistake in question concerns the jerseys of the Vancouver Grizzlies and Toronto Raptors. In short, they’re switched. The Grizzlies are wearing jerseys with a purple trim and stripe, with a white home uniform and black road uniform; a design that’s meant to stand in for the Raptors’ duds. Toronto meanwhile has a white home jersey with a teal trim and stripe, and a road jersey that’s teal with a reddish trim, obviously meant for the Grizzlies. Considering the colour schemes, and the fact that I’m a fan of those original Grizzlies and Raptors jerseys, it’s very strange that I somehow managed to overlook the error given that I’ve played a lot of NBA Hangtime on Nintendo 64. 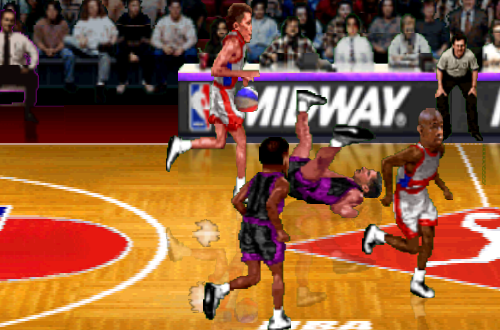 It should be noted that there are no other errors with the Raptors and Grizzlies having each other’s assets. Both teams have their correct logo, and their rosters are likewise accurate. You won’t even find an incorrect portrait for any of the players! The mistake with the jerseys is an odd one though, but once again, the mistake isn’t the surprising part in and of itself. Despite what our nostalgia might sometimes lead us to believe, old basketball video games were hardly free of bugs and mistakes, and previous titles in the NBA Jam series offer up their own examples of that. Kevin Edwards using Blue Edwards’s portrait is one, while the inclusion of a cancelled trade is another.

No, the part I’m having difficulty explaining is how I never noticed the mistake until it was pointed out, and I went back and checked; again, not because I didn’t believe Q, but because I wanted to be sure it wasn’t an issue in the North American release that had been fixed in the international version. That has been known to happen, especially in the days of cartridge releases, long before official patches were a thing on consoles. It’s definitely there in the PAL version, though. It’d be one thing if I’d just forgotten about it – it’s been a long time since I played NBA Hangtime regularly, and I’ve played a lot of basketball games over the years – but I simply never noticed it.

Of course, that’s led me to wonder how that could’ve been possible. I was familiar enough with the NBA to recognise such a mistake if I saw it, and yet it never clicked. There are some things that I can blame on the quality of PAL CRT televisions, but this isn’t one of them. If anything, it’s likely due to the simplicity of the jerseys. The jerseys in NBA Hangtime aren’t detailed as in NBA Live 97, but rather a basic design shared by all teams, differentiated by the primary and trim colours. My guess is that a combination of the basic designs, being early opponents in the tournament mode, not playing with them very often, and general enjoyment of the game, led to an oversight. 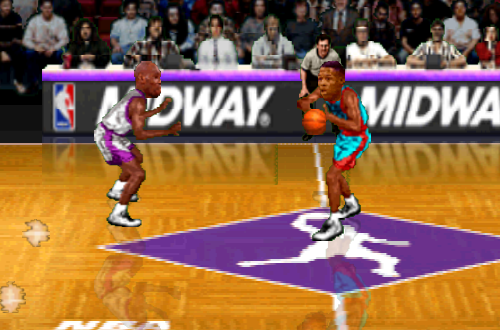 Or perhaps it’s as a simple as they were bottom of the barrel teams at the time, and so I just didn’t care enough to notice. Indeed, there are some other issues with the jerseys in NBA Hangtime that I never paid much attention to either, but I’ll get to them in a moment. Discovering a mistake like this piqued my curiosity as to whether it can also be found in other versions. Q mentioned that the Super Nintendo version of NBA Hangtime doesn’t feature that mistake, and despite being an earlier release, it doesn’t. The Raptors do erroneously have a blue and red jersey on SNES, but the Grizzlies have a teal jersey. Mind you, the SNES version is also missing Class of 1996 rookies.

What about the original arcade game, of which the Nintendo 64 version is a rather faithful port? Well, that’s where the mistake originated. The PC port also reproduced the mistake, though the PlayStation version – the latest North American release – did not. NBA Maximum Hangtime, the updated version that appeared in arcades late in 1996, didn’t fix the jerseys for the Grizzlies and Raptors. It did feature updated 1997 season rosters however, which all home versions included by default (aside from the aforementioned absence of rookies in the Super Nintendo release). There are also a few other oddities with the jerseys that I hadn’t noticed until they were pointed out.

Because NBA Hangtime was originally released in arcades in April 1996, the game featured 1996 season rosters and team logos. However, a couple of team jerseys, such as the Seattle SuperSonics and Atlanta Hawks, weren’t updated for the 1996 season, instead still sporting a colour scheme similar to the ones they had in NBA Jam TE (set during the 1995 campaign). This carried over to most of the home ports, in which they were even further outdated. Not only that, but teams that had adopted new jerseys and colour schemes for the 1997 season weren’t updated either, resulting in the Detroit Pistons, Utah Jazz, and Minnesota Timberwolves’ jerseys reflecting their old colours. 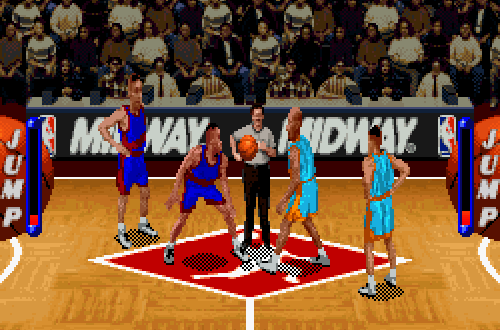 Oddly, the Super Nintendo version does feature some updated colours for those teams, making them accurate as of the 1997 season. As with NBA Jam Tournament Edition, it’s interesting to see how the same game differed across platforms as far as its rosters, team branding, and of course, the presence of a mistake such as the one with the Raptors’ and Grizzlies’ uniforms. Once again, I’m not entirely sure how or why the outdated colours for some of the jerseys didn’t register with me until so many years later. As I said before though, I’d assume that the basic nature of the designs, along with my enjoyment of the gameplay, ultimately distracted me from such details.

When I covered NBA Hangtime earlier in the year, I noted how it was an overdue retrospective, considering how it’s one of my all-time favourite basketball games and a title I spent so much time with. Perhaps it’s only appropriate that, after being pointed in the right direction of course, I’m overdue in noticing a mistake. It may also stand as an example of just how easily we can miss the forest for the trees, not to mention have false memories of the games we grew up playing; or even more recent titles, for that matter! It’s interesting how we can gloss over certain details in our excitement and mentally fill in the blanks later on, overlooking an obvious mistake in the process.

It just goes to show that no matter how many times you’ve played an old favourite, there are still new things you can learn…even when they’ve been staring you in the face for years! It’s one of the reasons I enjoy creating Wayback Wednesday content, as it’s an excuse to revisit classics with fresh eyes (or indeed, on a tip from someone), and discover a new secret or something else I never knew. As for NBA Hangtime, glancing at some eBay listings, it seems to have become one of the more expensive games to collect, with complete-in-box listings selling for several hundred US dollars. With that in mind, I’m glad that I still have my original N64 copy, mistakes and all.