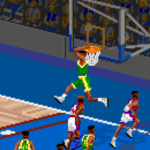 This is Wayback Wednesday, your midweek blast from the past! From retrospectives of basketball games and their interesting features, to republished articles and looking at NBA history through the lens of the virtual hardwood, Wednesdays at the NLSC are for going back in time. This week, I’m reflecting on what basketball gaming is like around the age of twelve, and what that looked like for me.

I was watching Yahtzee’s video on “Boomer Shooters”; a term describing old school first person shooters, and new FPS titles made in the same style. Astute observations are par for the course with Yahtzee, and in that particular video, he aptly outlined a key factor in nostalgia for video games and other forms of entertainment. Yahtzee described being around the age of twelve as “that wonderful nostalgic period in most people’s lives when they’re just old enough to properly appreciate their entertainment, but not yet old enough to be cynical about it”.

That immediately resonated with me, because it’s spot on! This isn’t to say that I didn’t appreciate video games and other forms of entertainment before or after that. Around that age however, there’s undoubtedly a sense of pure enjoyment, yet also an ability to discern what you like and dislike, and articulate why. This apt summary of nostalgia led me to reflect on my basketball gaming around the age of twelve, which I could flexibly define as eleven to fourteen. In hindsight, my favourites from that era shaped my preferences and expectations of hoops games. Let’s take a look back…way back…

Like Yahtzee, I was born in the 80s – specifically 1984 – so “around the age of twelve” places me in the mid 90s. 1995 and 1996 were the years when I was becoming more interested in basketball, and by the age of twelve it was a full-blown obsession. The games I was playing around that time are ones that I’ve fondly reflected upon several times: NBA Live 95 for Super Nintendo, NBA Live 96 on PC, and of course, NBA Jam Tournament Edition for both platforms. As far as the early days of basketball gaming are concerned, you can’t ask for a much better introduction to the genre! I won’t pretend that they’re perfect, but nostalgia aside, they do all hold up very well. 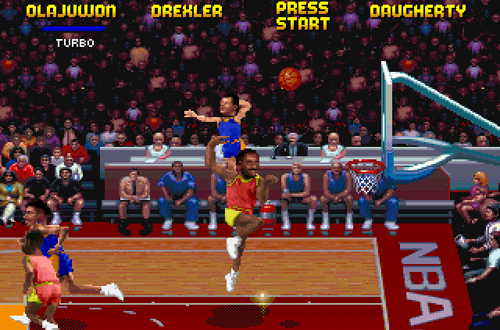 As I said, at the time, it was pure enjoyment. One of my fondest memories is of my cousin being allowed to stay over an extra day, which we used to play with every single team in NBA Jam TE. We wrote down our stats, and even noted when we were able to pull off the highly anticipated and always spectacular somersault dunks! It was the next logical step after defeating all 27 teams in arcade mode. It didn’t matter that Michael Jordan was missing from NBA Live 96; not when created players blended in with original players during gameplay. Makeshift roster updates, self-imposed goals, and the occasional urban legend…this was basketball gaming when I was twelve!

To the point of appreciating those games without being cynical about them, it didn’t matter that from a gameplay perspective, NBA Live 96 was very similar to NBA Live 95. Indeed, I remember being puzzled when gamers a little older than I was were dismissive of NBA Live 96, and later NBA Live 97, because they hadn’t made the kind of significant improvements that those people wanted to see. Looking back now, it’s certainly a fair point, even though I do believe that NBA Live 96 and 97 are both great games in their own right. Of course, I have nostalgia for them that was formed around the age of twelve, when I didn’t have their cynicism and critical expectations.

The same goes for the PC version of NBA Jam Tournament Edition. Did it matter that it wasn’t the most polished home port, with phantom deflections? Not to twelve-year-old me, it didn’t! I was more concerned with MJ’s absence (and again, trying to fool my friends with bogus claims that I’d unlocked him). It didn’t even matter that Kevin Edwards was using Blue Edwards’ portrait, to the point that it didn’t even click until a random session with the game over twenty years later! That doesn’t mean I believed those games were perfect, but the imperfections didn’t bother me as much as they later would. I loved basketball, and basketball video games were an extension of that. 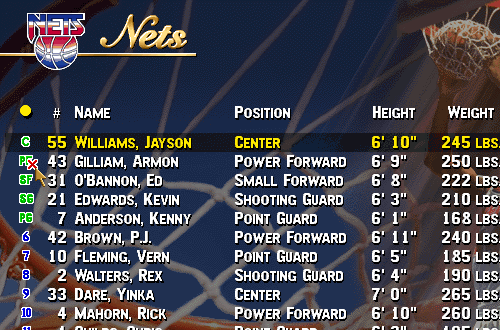 Those first games and early favourites that I was playing around the age of twelve did ultimately influence my tastes and expectations moving forward. NBA Jam TE was the baseline for all future arcade hoops titles, Jam-branded or otherwise. Whereas gamers whose first NBA Jam was the original may see it as being the gold standard, I expected ratings in numerical format, more than two players per team, and a reason to make substitutions between quarters, such as TE’s injury level. I still hold the original NBA Jam in extremely high regard, but playing the sequel/enhanced edition first led to it shaping my views as to what the ideal NBA Jam experience should be like.

In many ways, NBA Live 96 influenced my expectations for sim games, especially on PC. Even in the fantastic games that came out later on in NBA Live’s golden age, I missed the individual team roster screens, and reordering the lineups by dragging and dropping positions and numbers to move players. I also expected to see a complete listing of all the players in the league, and their career stats in a table when I viewed a player’s profile/card. The irony is that if nothing had changed, I may well have grown weary of specific presentation choices, and certainly a lack of innovation in modes and gameplay. Nevertheless, my tastes were established, and the bar had been set.

While I was still around the age of twelve – again, that eleven-to-fourteen window I’m roughly defining it as – subsequent games did live up to those expectations. Tech was rapidly improving, and while the visuals of the early 3D era may not have aged as well as 16-bit sprites, they were an exciting leap at the time. Even though I wasn’t aware of the situation with the name and relationships between companies back then – I thought NBA Jam and Mortal Kombat were made by Acclaim, not Midway – NBA Hangtime was a worthy successor to NBA Jam TE, and quickly became a favourite as well. I enjoyed all of those new games for what they were able to bring to the table. 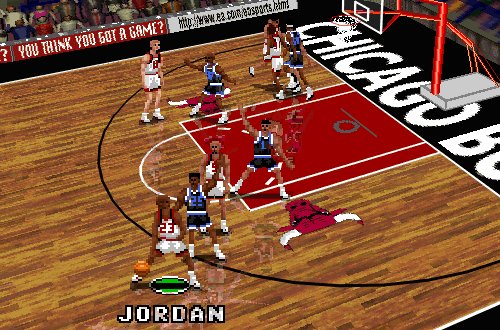 It was also around this time that I first got online, and discovered the NLSC and the modding community. Finding out that it was possible to give a created MJ his full bio data, overwrite original players, and fix duplicate or outdated jersey numbers, was simply mind-blowing! I was inspired by the work I saw, and eager to try my hand at making my own rosters. The burnout of being the “roster guy” for the NLSC, some of the squabbles in the community, and problems with egotistical individuals and paid mods, were all issues for a cynical future. When I was twelve, modding was just an exciting new discovery to further enjoy the basketball games that I already loved.

NBA Jam Tournament Edition, NBA Live 95, NBA Live 96, NBA Live 97, NBA Hangtime, and NBA Live 99 for the Nintendo 64…these are the basketball games that I was playing around the age of twelve, serving as my introduction to the genre, and shaping my tastes and expectations. Once again, I have several favourites that came after those titles, some of which I enjoyed even more and have greater nostalgia for. I was beginning to develop more of a critical eye by that point though, and definitely had expectations beyond “another fun basketball game with updated rosters”. There were great games that lived up to those expectations, but the point is that I had them.

Although it makes me feel old, it’s also interesting to see which titles were younger gamers’ introductions to the genre. The games that I approached with a more critical and cynical eye as someone in my late teens and twenties, were simultaneously being played by people who were around the age of twelve. When they recall their fond memories of NBA Live 2003 and note that it was their entry into basketball gaming, it differs from my recollections. For those gamers, it welcomed them into the world of the virtual hardwood with a fun new experience. For me, it was a game that didn’t live up to all of my expectations, given the tastes I’d developed within the sim genre. 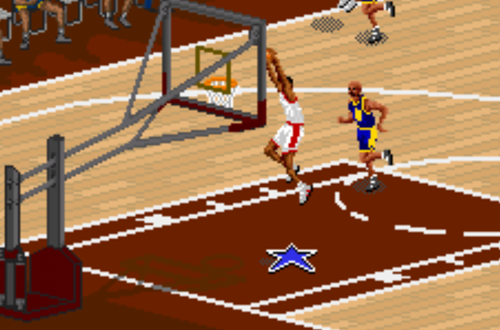 This demonstrates the cyclical truth of Yahtzee’s words. It’s not just my generation being stuck in the past, or holding it in high regard while being overly critical of the present. I mean, that’s not necessarily inaccurate, but we’re like that because we’ve had enough time to establish our tastes and criteria, and experienced games that failed to meet our expectations. I have also seen younger gamers express similar sentiments in the wake of undesirable changes and disappointing releases. At a certain point, we’re not twelve anymore, and the cycle repeats with a different set of basketball games. It’s why I’ve come to smirk at all of the “old head” jabs. Kids, you’ll get there, too!

Then again, younger basketball gamers these days are being introduced to the genre with games that have normalised microtransactions, loot boxes, and a heavy focus on cosmetic items. In other words, changes that have evoked cynicism among us older gamers are the way of things to a twelve-year-old hitting the virtual hardwood and blacktop for the first time now. Time will tell if the cycle is broken, or if the younger generation will grow dissatisfied and become more critical as we did. I expect the latter will come to pass. Cynicism isn’t a universally positive or desirable trait, but experience does allow us to become more discerning about what we consume.

Still, there’s something special about that time in our lives when we can, to paraphrase Yahtzee, appreciate our entertainment without being cynical about it. The nostalgia for those games is incredibly powerful, even long after we’ve ditched the proverbial rose-coloured glasses. It doesn’t mean we can’t acknowledge imperfections or rank newer games as being better, but that spark of joy we felt while gaming around the age of twelve is still there, deep down. I like that, and even though it’s important to develop discerning tastes and critical thinking, there’s a lot to be said for youthful exuberance in our hobbies. If nothing else, I’m grateful for those fond memories.