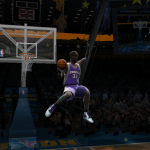 This is Wayback Wednesday, your midweek blast from the past! From retrospectives of basketball games and their interesting features, to republished articles and looking at NBA history through the lens of the virtual hardwood, Wednesdays at the NLSC are for going back in time. This week, I’m taking a look back at some basketball gaming urban legends.

Given the amount of secret content that’s been packed into video games over the years, it’s no surprise that there are more than a couple of urban legends across all genres. TV Tropes creatively titles the phenomenon “Urban Legend of Zelda“, which is extremely apt considering how many examples the Legend of Zelda series itself provides. Basketball games have had their fair share of urban legends, perpetuated through a combination of schoolyard (and later, internet) chatter, misunderstandings, and the occasional trolling hoax.

There have been some interesting urban legends associated with the virtual hardwood, concerning both sim and arcade games. In some cases, you can see how gamers came to believe them, especially before the ins and outs of player likenesses were widely known. I’m sure you’ve heard some of these before, but it never hurts to debunk urban legends, and tell the real story if there is one. Let’s take a look back…way back…

Perhaps the most enduring of all basketball gaming urban legends is the supposed inclusion of Michael Jordan in NBA Jam. I’ll put my hand up here and admit to making up a rumour of how to unlock him to see if I could fool one of my friends; I did not. Simply put, no, MJ is not a secret character in the arcade version of NBA Jam or NBA Jam Tournament Edition, or the home ports. There’s no sequence of button presses, secret combination on the initials screen, or in-game action or achievement that will unlock him. MJ wasn’t licensed to appear in the game – as was the case in most NBA games through the 90s – as he retained control over the use of his image. 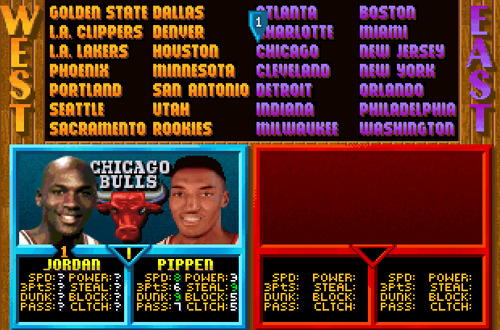 Now, as series creator Mark Turmell and voice of NBA Jam Tim Kitzrow have both discussed on several occasions, there were a few special versions of the game that included Michael Jordan, as well as Gary Payton and MLB legend Ken Griffey Jr. They were made at the request of those athletes, and weren’t released to the public. The ROM for that version still exists, and as Tim put it, it’d be the Holy Grail if it could ever be officially released in some form. Of course, the existence of these machines wasn’t widely reported back in the 90s, so the urban legends came from our hope that we could play with MJ, while failing to understand the legal necessities.

Besides, it’s not as though there wasn’t a precedent for unexpected secret players in NBA Jam, from Bill Clinton and Prince Charles to Benny the Bull and the Fresh Prince himself, Will Smith. Of course, inspecting the code and assets for NBA Jam confirms who is and isn’t there. In fact, that’s standard practice for debunking most basketball gaming urban legends, but it hasn’t stopped them from gaining legs over the years. The sim games weren’t immune from rumours about unlockable players and secret teams, such as retro squads. Similar rumours claimed that by performing certain tasks, it was possible to unlock a full dunk contest mode in various NBA Live games.

The methods of unlocking teams and players, or the supposed hidden dunk contest, usually involved going undefeated in a season and winning the championship, hitting specific statistical goals, or occasionally, punching in a code. With the exception of the hidden players in the 16-bit version of NBA Live 96 (which EA Sports got into trouble over), or the openly unlockable Legends in the PlayStation version of NBA Live 2000, these supposed secrets were little more than basketball gaming urban legends. Once again, inspecting the game’s assets would reveal the truth, but it was a lack of critical thinking and understanding of likeness rights that led many to believe. 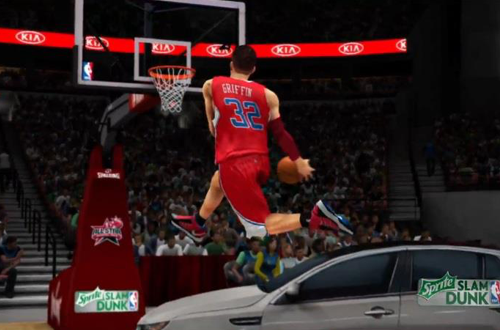 Putting aside the aforementioned NBA Live 96 Easter eggs, it wasn’t until developers were able to license retired players that Legends and retro teams could be added. It took players such as Michael Jordan, Charles Barkley, and Shaquille O’Neal losing their exclusivity and/or granting the use of their likeness to finally officially appear in games. Consider the expense of licensing those players, and the appeal they had as a potential selling point. There was no way that a game that secured the likeness rights for Michael Jordan and several other greats would hide that content as an obscure unlockable that most gamers would struggle to obtain. It would be a complete waste.

Similarly, the notion that a feature as big as the dunk contest would be tucked away as a difficult unlockable is absurd when you think about. One only has to look at the way the All-Star Weekend was heavily marketed in NBA Live 2005 to realise how much of a selling point it was. The only precedent for EA Sports hiding a mode behind a code was modem play in NBA Live 99 PC, appropriately unlocked by entering the phrase “ilovelag”. It was a different time though, when an online multiplayer option was more of a bonus feature. Hiding a dunk contest in NBA Live 2004 – as some believed – would be like hiding MyCAREER and its connected modes in NBA 2K22.

That wasn’t the only example of basketball gaming urban legends regarding the dunk contest. NBA 2K13 brought back the event, albeit in a new style reminiscent of a rhythm game like Guitar Hero or Rock Band. It was also a console exclusive, but that didn’t stop gamers from asking whether it was in the PC version, and if so, how to unlock it. It didn’t help matters when a Photoshopped screenshot claimed to reveal the dunk contest was in the PC version. When pressed for details, the person declined to reveal them, stating that they were offended by the doubters and would keep it a secret as a result. As much as anything else, this served as proof that they were lying. 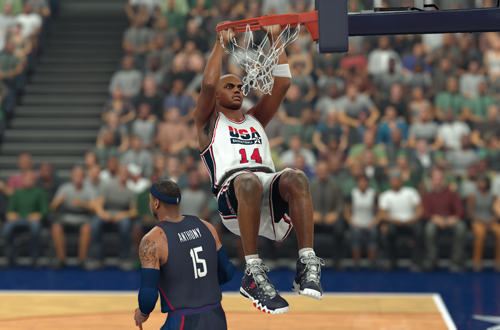 After all, this is a tried and true trick for anyone who perpetuates video game urban legends in general, not just in basketball gaming. Make an outrageous claim, ideally with faked evidence to strengthen your case. Be vague on the details of how to unlock or access the secret, while promising to reveal the whole truth if everyone plays nice and strokes your ego. Then, when someone inevitably disproves the lie with evidence and critical thinking, take umbrage and declare they cost the community the chance of ever learning the secret. Returning to rub the ruse in everyone’s face is often the final step. The “Triforce Hoax” for Ocarina of Time is a great example of this shtick.

With basketball video games phasing out hidden content and old school cheat codes in favour of live service content updates, as well as a greater understanding of why some players are included and others aren’t, urban legends are no longer as prevalent in basketball gaming. On one hand, it’s a shame. Back in the 90s, there was genuine excitement at finding secrets before they were published in magazines and strategy guides. Although a lot of tall tales were told, when you did find a legitimate secret, it was a rush to share it with your friends as soon as you could. And yes, as much as I hate to admit it, there was fun in seeing if you could get people to believe a rumour!

There are some other basketball gaming urban legends that are worth remembering, and debunking. A long-standing rumour is that Charles Barkley doesn’t want to appear in video games because he was dissatisfied with the quality of Barkley Shut Up and Jam, or has a strong distaste for video games in general. In fact, Sir Charles has indicated that he is willing to appear among the historical players in NBA 2K on a regular basis – he made exceptions in NBA 2K13 and NBA 2K17 – if Take Two were to make a sizeable donation to the retired players fund. Unfortunately, the company hasn’t seen fit to do that, and so as of NBA 2K22, Charles Barkley is still absent. 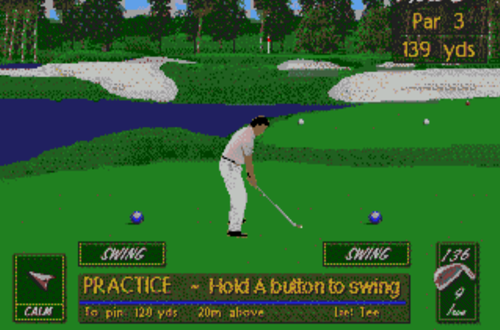 I’ve seen some claims of cartoonish sound effects indicating that the comeback logic is kicking in, or that some games are so predetermined to the point of yielding the exact same result if you restore a saved game in progress. While I won’t ever claim to be infallible in my knowledge of basketball gaming, I’ve spent a lot of time with the titles this supposedly happens in and experienced their comeback logic, and I can confirm them as urban legends. Furthermore, a couple of the games mentioned in this urban legend don’t even have in-game saving functionality! Whether this is intended as hyperbole or it’s really believed by those who have claimed it, I couldn’t say.

It should be noted that some legends are actually true! One example is a cheat in NBA Live 95. By entering “reflog” as the user profile name (which you may recognise as being “golfer” backwards), you can play a hidden golf game; specifically, a preview of PGA Tour 96. The catch is that this Easter egg is only included in the Sega Genesis version of NBA Live 95. When I couldn’t get it to work on Super Nintendo, I wrote it off as someone playing a joke. The misinformation stems from an old cheats listing that implied it worked on SNES as well. Such oversights in those resources can lead to legitimate secrets appearing to be basketball gaming urban legends and hoaxes.

Mods can also contribute to urban legends and misinformation regarding basketball gaming. Several ROM hacks have added Michael Jordan to the SNES version of NBA Jam and NBA Jam Tournament Edition, leading to renewed confusion about his status in those games for people who see videos and don’t realise it’s a mod. The Wikipedia page for NBA Live 08 erroneously claimed that two Dream Teams were included in the game. Only the current (as of 2007) Team USA appeared in NBA Live 08, but the 1992 and 1996 squads were added as bonus content in my 2013 season roster update, which isn’t official. It’s enough for misinformation to be added to Wikipedia, though. 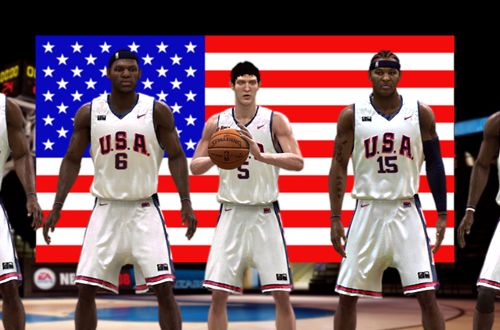 Basketball gaming urban legends arguably aren’t as exciting as other genres, but there have been some interesting rumours over the years. As I noted, they’ve mostly fallen out of vogue, which is both a shame and a relief; a shame because there was always a certain amount of fun to them, and a relief because misinformation isn’t helpful to anyone. For better or worse, they’re a product of their era. It’s interesting to look back on the hoaxes that captivated us, and secrets we hoped were true. If nothing else, our interest in those legends likely paved the way for that content to be included in later games. Unfortunately, we’re still waiting on that official NBA Jam ROM with MJ!