Wayback Wednesday: Be a Pro in NBA Live 09 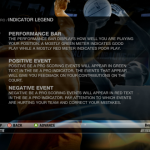 This is Wayback Wednesday, your midweek blast from the past! In this feature, we dig into the archives, look back at the history of basketball gaming, and indulge in some nostalgia. Check in every Wednesday for retrospectives and other features on older versions of NBA Live, NBA 2K, and old school basketball video games in general. You’ll also find old NLSC editorials re-published with added commentary, and other flashback content. This week, I’m taking a look back at Be a Pro in NBA Live 09.

When you think of early incarnations of single player career modes in basketball games, which titles come to mind? The Life in Sony’s NBA series, or the debut of My Player in NBA 2K10, are probably the first two that you think of. However, right around the same time, NBA Live was starting to make some inroads on adding a single player mode of its own. Before Rising Star in NBA Live 14, before Become Legendary in the ill-fated NBA Elite 11, EA Sports were experimenting with career mode concepts in the form of Be a Pro, which only appeared in NBA Live 09.

Aside from being noteworthy as NBA Live’s first attempt at implementing a single player career mode, Be a Pro is interesting to reflect upon as it differed greatly between the new gen and old gen versions of NBA Live 09, and not in the way you might expect. Let’s take a look back…way back…

Although NBA Live 09 was the first Live game to trail its NBA 2K counterpart in total sales, it was still seen as something of a step in the right direction for EA. Granted, PC gamers were grumbling as the series became console exclusive, and the PlayStation 2 version was definitely an afterthought by that point, but on PlayStation 3 and Xbox, NBA Live 09 made some pleasing strides. There was some improvement to the gameplay, thanks in no small part to the introduction of Player DNA. The NBA Academy enhanced both Dynasty and practice modes, more FIBA teams were included, and replays could be saved and edited. And of course, Be a Pro debuted. Be a Pro in the PlayStation 3 and Xbox 360 version of NBA Live 09 wasn’t actually a fully-fledged single player career mode, though. It was in fact a single exhibition game, in which you assumed control of the player (or more accurately, the position) of your choice. Like the career modes in later games however, you were graded on your performance; specifically, how well you played your chosen position with the player at your disposal. It was clearly intended to be a forerunner to a career mode though, with player locked gameplay and a primitive version of the grading systems we’ve come to be familiar with.

It also served as an offline practice for Online Team Play, since it provided an assessment of areas where you performed well and areas where you performed poorly, given the position you were playing. The grading system and logic was, as I mentioned a moment ago, very primitive. There was no distinction for good and bad shot selection; just good and bad grades for makes and misses. I have seen a deduction for a bad double team, but despite the indicator that appeared when your mark wasn’t being guarded properly, the game was quite lenient on the defensive breakdown penalties. On the whole, the grading system was functional, but basic.

The mode featured a special broadcast camera that automatically zoomed out to show the entire court, which was handy. Teammate AI left a little something to be desired, but gamers did maintain some control over the action, as it was possible to command teammates to pass, shoot, or try for a dunk or layup. To that end, Be a Pro was a respectable effort. As a preview of a potential career mode in future games, and even as a warm-up for Online Team Play, it was admittedly a little lacking, and the appeal wore off fairly quickly. Nevertheless, it was still interesting to see it in NBA Live 09, and it was something to try out at least once.

As I mentioned earlier, Be a Pro was also in the PlayStation 2 version of NBA Live 09. Ironically, despite being the prior gen version of the game, the PS2’s Be a Pro was actually the more fleshed out mode! Like its counterpart in the PS3/360 version, it featured single game play, albeit without the in-game performance meter. However, that was basically practice for the mode’s Season play, in which gamers could take control of a single player for an entire season and Playoffs. Although there was no grading, there were different tasks to complete game to game. Completing these tasks earned experience points, which were used to increase player ratings. This made Be a Pro in NBA Live 09 PS2 much closer to being a proper career mode than its new gen counterpart. It lacked the multiseason play that subsequent single player modes have featured, while instead providing control over the team. You could change lineups, make trades, and even substitute during the game. Indeed, while you were technically locked to a single player, you were able to sub them out, at which point you’d control whichever player replaced them. Be a Pro also shared some other functions with Dynasty, such as simulation intervention and scenarios, though it remained primarily focused on controlling and levelling up a single player.

If you didn’t like the idea of taking control of an existing player, you were presented with the option of creating a new one upon entering Be a Pro. The functions were basically the same as the regular Create-a-Player, only with a cap of 50 ratings points to distribute as you wished. Unfortunately, you couldn’t redistribute the points of the starting ratings, which were all set at 50 no matter the position of the player you created. That meant point guards with overinflated blocking ratings, and bigs with guard-like abilities. It wasn’t an ideal approach, but it was still more of a career mode than anyone was expecting, and in a game that was an afterthought, too.

Unfortunately, Be a Pro would not be expanded upon in NBA Live 10. It was instead dropped entirely, although other modes of merit were added, such as Dynamic Season and adidas LIVE Run. Still, it meant that NBA Live’s first foray into the single player career experience turned out to be something of a false start. Although Become Legendary was set to debut in NBA Elite 11, with the game’s cancellation and subsequent setbacks for the NBA Live series, it wouldn’t be until Rising Star in NBA Live 14 that EA’s game would finally feature a career mode, albeit one that remains fairly bare bones as of NBA Live 16.

Obviously, it’s interesting to reflect on how Be a Pro differed between the two different versions of NBA Live 09, and note that it was actually the old gen version that received the fleshed out mode. However, it’s also interesting to look back and see concepts that later career modes in both NBA Live and NBA 2K would end up adopting. The tasks in the PS2 version are not unlike the Dynamic Goals from NBA 2K13’s MyCAREER. The performance meter obviously resembles the grading meters in subsequent games, and both games have implemented their own XP systems for upgrading player ratings. It also makes you wonder what might have been. EA Sports were so close to being able to implement a career mode that – for its time – would have been reasonably fully featured. It’s a reminder that NBA Live was starting to find its feet again, fleshing out modes while improving gameplay, only to be thrown back to square one with the changes in direction for NBA Elite 11 (although Become Legendary did have some good ideas of its own). Modes like a Be a Pro stand as a reminder that while NBA Live is currently known for trying to play catch-up, there was a time when it was doing some innovative things.

With everything that MyCAREER has done in recent years – cinematic stories, collaborations with Spike Lee, and so forth – and even the debut of Rising Star, Be a Pro likely remains largely forgotten. Let’s give credit where it’s due, though. As a forerunner to a proper career mode, it brought some good ideas to the table, and provided basketball gamers with something extra to try out, particularly in an otherwise overlooked and somewhat sloppy PS2 release. Today’s career modes certainly let us be a pro by simulating the life of an NBA player in greater detail, but all those years ago in 2008, NBA Live 09 did give us a small taste of the experience.