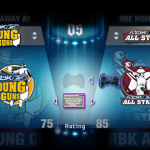 This is Wayback Wednesday, your midweek blast from the past! In this feature, we dig into the archives, look back at the history of basketball gaming, and indulge in some nostalgia. Check in every Wednesday for retrospectives and other features on older versions of NBA Live, NBA 2K, and old school basketball video games in general. You’ll also find old NLSC editorials re-published with added commentary, and other flashback content. This week, I’m taking a look back at the bonus teams that have been featured in various NBA Live games.

In the years following Lakers vs Celtics, it was a big deal when NBA games finally included the entire league. Once that became standard, we eventually reached a point where some sort of additional content was expected. NBA 2K has set the bar here with its historical teams, but there was a time when EA’s series was also going above and beyond simply featuring the current NBA rosters. These efforts include the Decade All-Star teams, which I talked about last week, as well as the FIBA squads that would be added in later NBA Live games.

Those weren’t the only playable squads outside of the NBA teams, though. I discussed the unlockable developer teams in a previous Wayback Wednesday, but in the years that followed that era, NBA Live featured a number of other bonus teams. While they weren’t necessarily as unique as the developer teams, or as exciting as the Decade All-Stars and FIBA squads, they were still noteworthy additions to NBA Live’s rosters. Let’s take a look back…way back…

While the Decade All-Stars allowed us to play with NBA Legends without having to place them on a current roster, these bonus teams allowed us to mix things up with a few fantasy squads featuring NBA players. NBA Live 2005 introduced us to a couple of new teams: the European All-Stars, and International All-Stars. As their names imply, the teams were made up of a selection of the best European and other foreign-born NBA players respectively. Oddly, there was no USA All-Stars team for them to clash with, but they could obviously battle it out with each other, as well as take on any regular NBA team, the East and West All-Stars, or a Decade All-Stars squad. 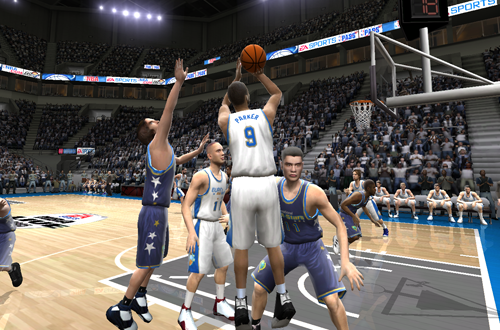 The European and International All-Star teams were fixtures in NBA Live for the next couple of releases. NBA Live 06 saw the addition of two more bonus teams, namely the RBK All Stars and RBK Young Guns, due to a partnership with Reebok. The former team featured established All-Stars who wore Reebok shoes, such as Allen Iverson and Yao Ming, while the latter was made up of the younger players who were signed to the brand, including Jamal Crawford, Darius Miles, and Shaun Livingston. Notably, while the International and European All-Stars featured full rosters, both of the Reebok teams only featured eight players apiece.

NBA Live 07 dropped both of the Reebok teams in favour of featuring Team Adidas. Once again, the squad only featured eight players, but those players included big names such as Kevin Garnett, Tim Duncan, Gilbert Arenas, and cover player Tracy McGrady. NBA Live 08 retained the adidas squad while adding a few more players to its roster, but dropped the International and European All-Stars, most likely seeing them as being redundant with the newly added FIBA teams. NBA Live 09 expanded the selection of FIBA teams and retained the full roster of adidas players, but the days of featuring bonus teams made up of NBA players were drawing to a close. 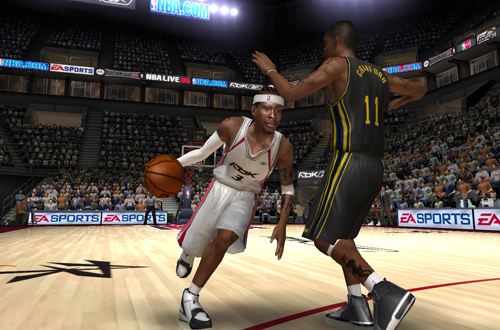 Losing the Decade All-Stars and the Legends was definitely the bigger blow, and it remains the more contentious issue to this day. It’s probably fair to say that the other bonus teams weren’t used all that often, and weighing up that data along with the need to make token updates to them every year, the developers did make an understandable decision in removing them. All the same, it was somewhat unfortunate. While they may not have been the most popular content in the game, those bonus teams were a little something extra that made use of players who were already licensed to appear. At the end of the day, they were additional content, and that rarely goes astray.

Of course, they were arguably more significant in the PC version of NBA Live, where they could be put to use by our modding community. The presence of the bonus teams in the database meant that a new value was added to the roster data, flagging them as special teams that were only available for exhibition play, with minimal roster editing functionality (i.e. players couldn’t be traded or signed there). Having this flag/value in the game was very useful when it came to creating custom teams, as it was perfect for adding historical, All-Star, or any other non-NBA squad to a roster. Their art assets were also suitable short term placeholders in various modding projects.

Like a lot of aspects of older titles that I’ve looked back on in recent months, these old bonus teams are a somewhat outdated concept. There is a lot more appeal in adding historical teams, or the All-Time squads for each franchise. When it comes to extra content in NBA Live, featuring Legends outside of Ultimate Team would likely also be a much higher priority for most gamers. However, as I said back in June, I for one would welcome the return of bonus teams such as the International All-Stars, teams representing brands and apparel, and so forth. After all, their assets could also be put to use in Ultimate Team, One Courts, and even The Streets World Tour. 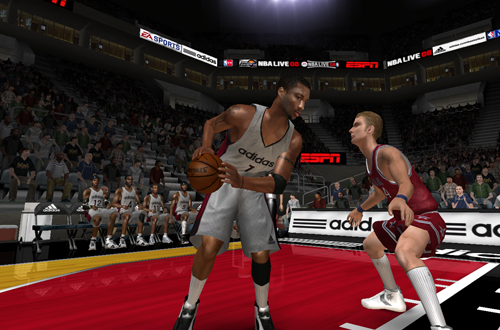 Even though these bonus teams don’t quite measure up to what NBA 2K has done in terms of historical content, and may have seemed a little pedestrian at the time as well, there is value in them. Their presence represented a willingness to go beyond the bare minimum of including every NBA team and the East and West All-Stars. They were something for gamers to discover and enjoy, if only for a couple of games every now and again. They didn’t require any players to be licensed that weren’t already in the game under the NBAPA agreement. Although they don’t represent a huge amount of effort, it was nevertheless an effort to provide some sort of bonus content.

I’d like to see NBA Live return to its creative roots here. We needn’t see the exact same bonus teams as we once did, but there are new concepts that could be utilised. With more foreign-born stars than ever, unofficial Team USA and Team World squads would be fun to play with. As I mentioned, brands like Nike, adidas, and Under Armour would be logical choices. Draft Classes, Rising Stars, additional East and West teams, and of course, Decade All-Stars with the Legends they’ve licensed, would all be welcome. Some ideas should be left in the past, but this is one that could provide future NBA Live games with a few familiar and very appealing hooks.