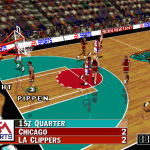 This is Wayback Wednesday, your midweek blast from the past! In this feature, we dig into the archives, look back at the history of basketball gaming, and indulge in some nostalgia. Check in every Wednesday for retrospectives and other features on older versions of NBA Live, NBA 2K, and old school basketball video games in general. You’ll also find old NLSC editorials re-published with added commentary, and other flashback content. This week, I’m going bug hunting in NBA Live 96 PC.

It’s strange how certain memories will randomly pop into your head. Last year, I whipped up a video illustrating a tall tale that I heard about Michael Jordan many years ago. It’s something I hadn’t thought about in years, but something jogged my memory, and I felt like reflecting on that ridiculous story. The same thing happens with basketball video games. I’ll randomly remember a feature or something that I once experienced, and it strikes me as a good idea for a Wayback Wednesday feature. It’s as good of an excuse as any to revisit some old favourites, too.

Of course, our memories aren’t always reliable. I’ve discussed the phenomenon of having false memories of basketball video games in The Friday Five, and indeed, I had enough examples for second column. It pays to double-check, and there are Wayback Wednesday features I’ve had to amend (and in one case, re-write completely) when I haven’t done my due diligence. With that in mind, on this occasion I’m making the research itself into the feature! There’s an error that I vaguely recalled encountering in the PC version of NBA Live 96, so this week, I’m going bug hunting. Let’s take a look back…way back…

The bug we’re hunting for is one that occurs in Season mode. While playing a Season with the Chicago Bulls – with updated rosters – a road game against the Los Angeles Clippers took place on the Vancouver Grizzlies’ home court. As I recall, I was playing the game against the Clippers and feeling like something was out of place, but wasn’t sure what exactly. I had a sense of déjà vu though, and upon noticing that the game was taking place on the Grizzlies’ court, I realised that it was familiar because I’d only just played them in Vancouver. I probably also wondered how I could’ve possibly failed to notice the error immediately at tip-off. After all, it’s a rather obvious bug! 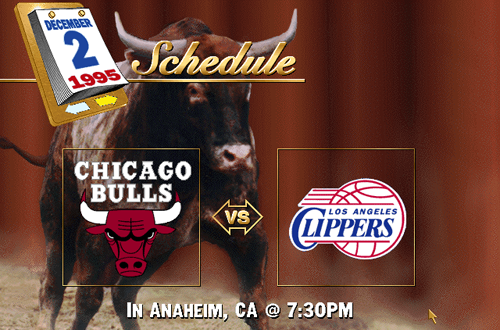 A bug like that is the kind of trivia note that I’m inclined to mention in other features, but before I do so, it’s important that I determine whether my memory is correct. It’s also vital to determine whether said bug is in the vanilla game, or the result of the roster mod I was using (my own update, as it happens). As such, my bug hunting began with the default executable for NBA Live 96, and no updated roster file. As I fired up the game, I was filled with nostalgia. The main menu with the animated ticket, the distinctive soundtrack by Traz Damji, the various backgrounds featuring real photos, and the golden buttons, always bring back so many fond memories.

After beginning a new Season game with the Chicago Bulls, I proceeded to the Schedule screen. Jumping ahead, I saw that the Bulls’ first game against the Grizzlies was in Vancouver on November 30th, 1995. Skipping to the next game, I saw that it was the game against the Los Angeles Clippers in Anaheim. Those were the games I needed to test out, so I simulated up to November 30th. I went into the Grizzlies game just to check if anything else was amiss, but everything looked normal: correct court, correct jerseys, and correct players. I quit out, and simulated ahead to the Clippers game. I hit Play in Schedule and loaded into the game, filled with anticipation.

Now came the moment of truth. Would I see the Clippers court, or would a bug cause them to be playing in Vancouver, as I remembered? As it turns out, I didn’t imagine or misremember the situation, and the bug does indeed exist in NBA Live 96 PC! The December 2nd game on the Bulls schedule on the road against the Clippers definitely takes place on the Vancouver Grizzlies’ court, and it occurs when using the default executable and no custom roster file. My roster update wasn’t to blame for this strange occurrence, which actually comes as a relief all these years later (especially since I do recall making a couple of changes to the Bulls’ schedule in the 1998 season mod). 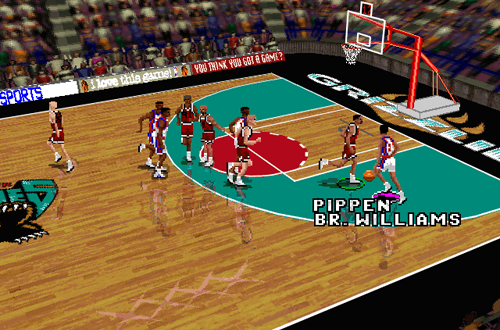 Of course, after discovering that this bug was real and I wasn’t imagining things, I was curious to see if any other teams were similarly affected, and ran a few more tests. First, I tried an exhibition game between the Bulls and Clippers, with the latter as the home team. The bug didn’t occur, though I did notice that the location of the game was listed as Los Angeles, rather than Anaheim. Back then, the Clippers played 5-8 games a year at the Arrowhead Pond of Anaheim, in anticipation of a possible move to the city. Season mode therefore represented the games at the Arrowhead Pond and Los Angeles Memorial Sports Arena, as per the Clippers’ real 1995-96 schedule.

This suggested that the Anaheim games on the Clippers’ schedule weren’t assigned the correct court due to being an alternate location. Because the Bulls’ schedule only featured one road game against the Clippers and it was in Anaheim, my exclusive use of Chicago in Season mode helped the bug to stand out in my memory. I was never able to play the Clippers in LA as long as I controlled the Bulls. To that end, my next test was to start a Season with other teams and test the road games in both LA and Anaheim. I also wanted to begin a Season with the Clippers themselves, and see if the bug still occurred while controlling them. I predicted that I’d keep seeing the error.

Using the Los Angeles Lakers – whose location in NBA Live 96 PC is Inglewood, as they were still playing at the Great Western Forum back then – I simulated ahead to a game against the Clippers in Los Angeles. The correct court was used. Looking at the Clippers’ schedule, I discovered that their first game in Anaheim was, coincidentally, against the Grizzlies. That game also took place on the Grizzlies court when playing a Season with Vancouver, or the Clippers themselves. Further testing confirmed that any game played at Anaheim, whether controlling the Clippers or another team in Season, results in a bug where the game instead takes place on the Grizzlies’ court. 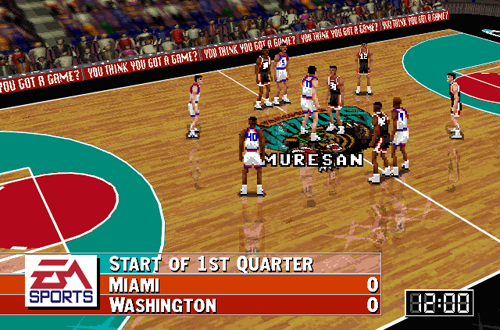 Clearly, the incorrect court was linked to the Anaheim location. Having confirmed the cause of the bug, I wondered if it was possible to fix it. My first idea was to comb through the executable file and search for references to Anaheim. Finding a couple of strings that appeared to be references to art files, I tried changing “ANAHEIM” to “LACLIPP”, while leaving menu text strings alone. It had no effect at all. My second idea was to try the schedule tool in the NBA Live 96 editor, but opening it up, there was no way to change the location from Anaheim to LA. Apart from changing the location so that those games are road games for the Clippers, a fix seems unlikely.

As long as I was bug hunting in NBA Live 96, I thought that I’d check out some of the other alternate locations found in the exe file. For example, most of the home games for the Bullets took place in Landover, but a few were played in Baltimore. I tried playing a Season game located in Baltimore, and once again found myself on the Vancouver Grizzlies’ court! Tokyo is also among the locations, though this is leftover data from NBA Live 95, when the Clippers and Portland Trail Blazers played a game in the Yokohama Arena in November 1994. Hartford, where the Boston Celtics used to play some of their home games, is also leftover data from NBA Live 95’s schedule.

With that in mind, I figured I’d check NBA Live 95 PC to see if it had a similar bug when it came to alternate locations in Season mode. This led me to discover another interesting situation that possibly explains the bug. Those games in NBA Live 95’s Season mode are played on a generic court, rather than the court of the designated home team. I’m assuming that this was meant to happen in NBA Live 96 as well, with the Grizzlies’ court being used as a placeholder. Alternatively, it might’ve used the same ID as the generic court, or was perhaps the failsafe if a court file couldn’t be found. The latter would make sense, given the game was developed in Vancouver. 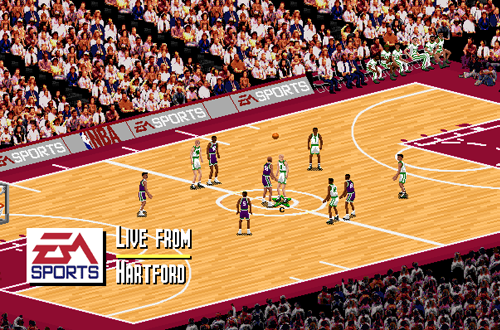 I really enjoy making discoveries like these, years later. In hindsight, they’re easy to overlook as you’ll only encounter them if you play a Season with the teams who have games in an alternate location, or with the teams that they face in those contests. You won’t see the generic court used in NBA Live 95, or the Grizzlies’ court incorrectly show up in NBA Live 96, if you’re just playing exhibition games or a Season with no games in the alternate locations. As with the Kevin Edwards portrait bug in the PC version of NBA Jam Tournament Edition, I find it fun and fascinating to discover and investigate something that I’ve managed to overlook for more than twenty years!

On this occasion, these discoveries were prompted by a vague memory of playing on the wrong court in NBA Live 96’s Season mode. It would’ve been easy to stop at confirming the bug, but digging a little deeper led down a rabbit hole to reveal a detail I’d overlooked in NBA Live 95; one that offers a plausible explanation for the issue in NBA Live 96, too. It serves as yet another example of why revisiting old games is so fun and rewarding. You never know what oddities you’ll uncover upon dusting off a game you’ve spent many hours playing, especially when a faint memory prompts you to go digging for confirmation, and feasible explanations about what you recall.