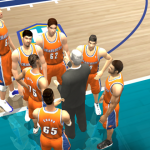 This is Wayback Wednesday, your midweek blast from the past! In this feature, we dig into the archives, look back at the history of basketball gaming, and indulge in some nostalgia. Check in every Wednesday for retrospectives and other features on older versions of NBA Live, NBA 2K, and old school basketball video games in general. You’ll also find old NLSC editorials re-published with added commentary, and other flashback content. This week, I’m taking a look back at the presence of the Charlotte Bobcats in NBA Live 2004.

The Charlotte Bobcats are no more. Well, the team is still around, but they are now of course the new version of the Charlotte Hornets, following the purchase of the name after New Orleans became the Pelicans. It’s probably safe to say that most NBA fans, both in North Carolina and elsewhere, were happy to see the familiar branding return. The Bobcats name was often criticised, with many fans feeling that it was a poor fit for an NBA team. With the team set to celebrate its 30th Anniversary this year, it’s great to have the Hornets back in the league.

Of course, the Charlotte Bobcats era remains a part of the club’s history, too. While the official lineage of the Hornets and Pelicans has been retconned to consider the Hornets inactive from 2002 to 2004 and the Pelicans to be an expansion team that joined the league in 2002, in reality the resurrected Hornets are the league’s newest team in terms of their operations, becoming the 30th franchise as the Bobcats in 2004. They would actually make their video game debut a year earlier however, as they were included in NBA Live 2004. Let’s take a look back…way back…

NBA Live 2004 is one of the standout games in the NBA Live series, boasting a range of interesting features. While All-Star Weekend was still a year away, we did see the debut of Dynasty mode, the continued use of CustomArt, a significant amount of hidden content, and of course, the Charlotte Bobcats. It marked the first (and to date, only) appearance of a future expansion team in NBA Live. While NBA Live 96 did tout the inclusion of the Toronto Raptors and then-Vancouver Grizzlies, those teams made their debut in the 1996 season. The Bobcats were therefore playable a whole year before they were set to tip off their inaugural campaign. 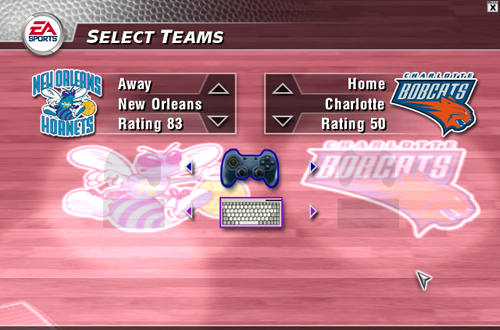 Rumours of the Bobcats’ inclusion circulated during the NBA Live 2004 preview season, but I remember feeling vehemently sceptical. I was adamant it was just a hoax, or maybe wishful thinking. Needless to say, I was completely wrong on that front, and was surprised to see them in the game. In my defense, it is a strange idea on paper, as the team had no players yet. How could we possibly play with them? It was an unprecedented move for NBA Live, and although the Houston Texans had been included in Madden 2002 a year before they began playing in the NFL, I figured there was no guarantee the NBA would allow EA Sports to do something similar with Live.

They did, however, and so the Charlotte Bobcats were among the teams in NBA Live 2004. As for the players that filled their roster, they were all fictional placeholders, with rather generic names: two point guards called Point Guard, two power forwards called Power Forward, two small forwards called Small Forward, a shooting guard called Shooting Guard, and a centre called Center Center. Each player had their own unique face texture, and different heights and weights. They did all have the same ratings though, and were the worst rated players in the game with overalls of 23 and 24. Playing with them was a challenge to say the least!

It was possible to fill the Bobcats’ roster with real players, though. Despite not being designated as a regular NBA team in the database, it was possible to trade players to and from the Bobcats, as well as sign and release players. This meant that you could release all the low-rated placeholders into the Free Agent Pool, and assemble a proper roster for the Bobcats. Also, while the players were fictional, all of the team art was official and accurate. While largely a novelty, it was a fun idea to be able to play with them a year early, especially since the roster could be customised. Having the jerseys and court in the game also provided assets for modders to work with. 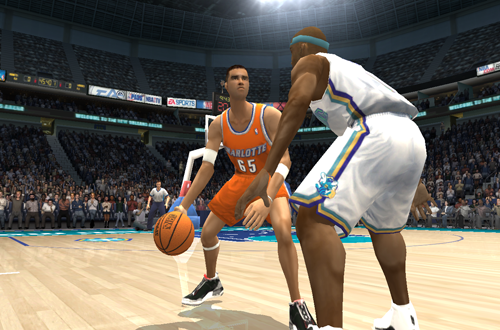 There were limitations though, and it’s fair to say that many of us were hoping for more with the inclusion of the Charlotte Bobcats. Specifically, we hoped that they would be available to play with in the newly revamped Dynasty mode, either through adding them at the start of a new game, or seeing them enter the league in the second year, as they would in real life. Unfortunately, this wasn’t the case. Both Dynasty and Season mode supported 29 teams – no more, no less – so the Bobcats were only for exhibition play. This obviously limited the usefulness of updating the team in rosters for the 2005 season and beyond, though most modders did so anyway.

With that in mind, there is some wasted potential with the Charlotte Bobcats in NBA Live 2004. It makes sense that they aren’t included in Dynasty mode by default as that wouldn’t have been authentic to the 2004 season, but the inability to add them to the NBA Live 2004’s flagship mode did come as a disappointment. It’s worth noting that the aforementioned Madden 2002, released in 2001, did include an expansion draft with the Houston Texans joining the NFL in year two of its Franchise mode. Perhaps a similar feature was planned for NBA Live 2004 at some point, but ultimately, the Bobcats were just included as some fun bonus content.

In that respect though, they were a worthwhile addition. Even as a relatively small bit of additional content, it was a cool idea, and an example of EA Sports going beyond the basics of what we expected to see in a basketball sim. It was inevitable that we’d begin to imagine all kinds of fantastic scenarios once the Bobcats were confirmed for the game – especially given what Madden 2002 had done – but again, it’s possible that an expansion feature was intended or at least discussed, falling through due to a lack of time and resources. Unfortunately, for all our clever modding discoveries over the years, we’ve never found a workaround to add them to Dynasty mode ourselves. 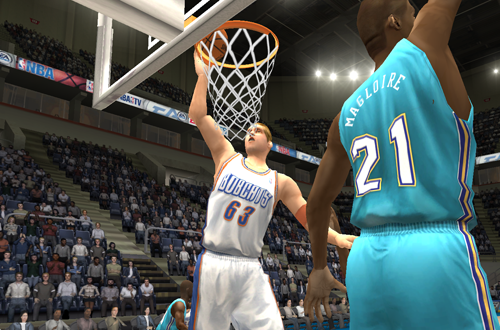 Still, they remain a fun idea for some bonus content, and an interesting trivia note in basketball video game history. Perhaps it’s only fitting. Although they are far from the most successful franchise in the league, the Bobcats had some interesting ups and downs. From being the first expansion team of the 21st Century resulting in the big realignment of the league, to Michael Jordan’s involvement and eventual purchase of the team, to the worst record in league history and their journey to becoming the new Hornets, in their own way, the Bobcats have had an impact on the NBA. They also became an intriguing project for Dynasty gamers in NBA Live 2005 onwards.

Their journey on the virtual hardwood began in NBA Live 2004 however, with those eight placeholder players facilitating a preview of what was to come. If you ever feel like a challenge, fire up NBA Live 2004 and take control of those Charlotte Bobcats against a top team, such as the 2004 Los Angeles Lakers featuring Shaquille O’Neal, Kobe Bryant, Karl Malone, and Gary Payton. Should you be able to steal a victory on Superstar difficulty, overpowering The Diesel with a 24 Overall centre and crossing up The Glove using a point guard with a 35 dribbling rating, then you most definitely possess some superior stick skills. Good luck, retro basketball gamers!

There was a rumor that if you pass some stage at Easports bio you can play them for a regular sesson for the ps2.

There’s no data in the game that would allow for that. It’s just one of those rumours along with the supposedly unlockable dunk contest and historical teams. Would’ve been cool, though!