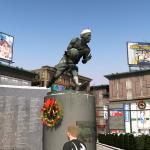 This is Wayback Wednesday, your midweek blast from the past! In this feature, we dig into the archives, look back at the history of basketball gaming, and indulge in some nostalgia. Check in every Wednesday for retrospectives and other features on older versions of NBA Live, NBA 2K, and old school basketball video games in general. You’ll also find old NLSC editorials re-published with added commentary, and other flashback content. This week, I’m taking a look back at Christmas content in basketball video games.

Merry Christmas and Season’s Greetings, basketball gamers! I hope you’re enjoying the festive season, and are looking forward to some of the marquee games that are set to tip off this Christmas Day. Since this week’s Wayback Wednesday has fallen on Christmas Day itself, I thought it would be fun to look back at how the occasion has been celebrated on the virtual hardwood. After all, a lot of video games have included Christmas content as Easter eggs – if that’s not too ironic a turn of phrase – and there are even seasonal games, such as the classic Holiday Lemmings.

Basketball games tend to have a more straightforward approach to the matter, but there’s still some interesting history with the virtual hardwood and the holiday season. With that in mind, and in the spirit of the season, let’s deck the halls, rock around the Christmas tree, and take a look back…way back…

Although the NBA doesn’t schedule any games on Christmas Eve, the tradition of playing on Christmas Day dates back to the league’s second season, when it was still the Basketball Association of America. Although players and coaches have expressed their discontent with games being scheduled on the holiday, those games tend to be among the highest rated of the season. As such, they’ve taken place every year since 1947, with the exception of 1998 when the season didn’t begin until February due to the lockout. Speaking of lockouts, the stoppage in 2011 resulted in the season actually starting on December 25th, which brings us to Christmas jerseys and video games. 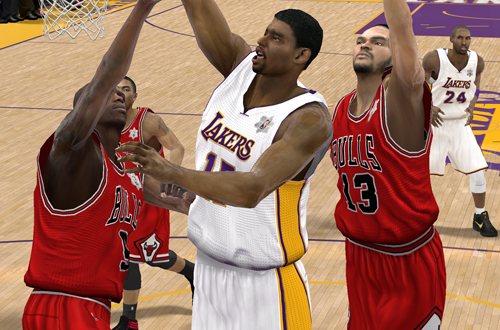 Beginning with the games played on Christmas Day in 2008, teams began wearing a patch of a snowflake surrounding the NBA logo on the shoulder of their uniforms. Because they were the same design as their regular jerseys, EA Sports and Visual Concepts didn’t usually bother including them among the alternates in NBA Live and NBA 2K. That changed in NBA 2K12, with the snowflake jerseys being made unlockable via a code on PlayStation 3 and Xbox 360, and later patched into the PC version. At the time, unlocking jerseys via a code was still in vogue, while pushing through new art updates was just starting to become a more common practice.

Adding the Christmas jerseys post-release became a necessity once the NBA began featuring special designs in 2012. This tradition, which ended when Nike took over the uniform license in 2017, saw the teams playing on Christmas Day unveil new jerseys every year. These took the form of solid colour jerseys, sleeved jerseys bearing not gifts but the team logos, jerseys with festive fonts as one might see on a Christmas card, and other twists on the usual designs. Because these designs weren’t revealed until the holiday season was approaching, they were held out of games so as not to be spoilers, and subsequently added in the post-release content updates.

This caused a few problems with the PC version of NBA 2K13, which didn’t receive many of the updates that were pushed through on PlayStation 3 and Xbox 360. While those versions of the game received all of the necessary art updates for the Christmas jerseys, the PC release did not. Entries for those uniforms were still added to the roster file however, meaning they were selectable but had a blank texture. Fortunately this wasn’t the case with NBA 2K14, with the PC receiving all necessary art assets including new uniforms and courts. Thankfully, this is still the case now that the PC release is a port of the PlayStation 4/Xbox One version. 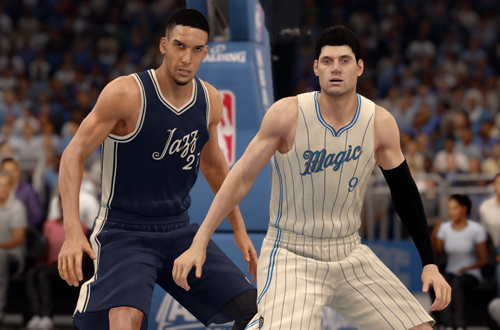 As the NBA continued the tradition of Christmas jerseys, they appeared in the current generation of NBA Live and NBA 2K games, being added and unlocked as they were unveiled in real life. Originally, only the teams that played on Christmas Day and were actually wearing seasonal uniforms also had them in the game, but in NBA Live 16 and NBA 2K16, all 30 NBA teams had their own Christmas-themed jerseys. These jerseys were still available in NBA 2K17, along with the new uniforms for teams that wore them during the 2017 season. It was a nice touch, and appropriate for generated schedules in the MyLEAGUE, MyGM, and MyCAREER modes.

Beyond the seasonal jerseys, the presentation in both NBA Live and NBA 2K has recognised Christmas (and other holidays) as appropriate. When you reach December 25th, or another significant date on the calendar, the overlays will be decorated with tinsel, holly, Santa Claus, and other festive trappings, just like a real broadcast. You’ll also see these overlays if you play exhibition games on the day itself, or if you set your PC/console’s date accordingly beforehand. There’s also special commentary and other effects such as snow on the 3D logos, once again imitating the presentation of an actual NBA broadcast. They’re small details, but they add to the immersion.

That covers presentation and branding, but what about gameplay? Generally speaking, basketball games haven’t celebrated the holiday season in the same way as other titles, such as Donkey Kong Country 3’s code that changes the aesthetics and music in the bonus levels. However, as you might expect, NBA Jam has gotten into the holiday spirit on the court. One of the unlockable teams in NBA Jam: On Fire Edition is the Santa Slammers, featuring an elf called Boom, another elf called Shaka, and Jolly Old Saint Nick himself. Other seasonal teams in that game include the Skeleton Crew (Halloween) and The Gobblers (Thanksgiving). All are unlockable in the Jam Store. 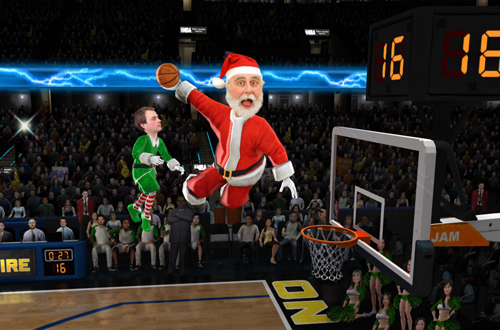 Despite Santa’s propensity for selfless gift-giving, he has a rather low pass rating of 3. He’s also quite slow – must be all the milk and cookies – but he can throw it down with the best of them thanks to his dunk rating of 9, and swat shots with ease owing to his block rating of 10. He can also knock down shots inside and outside the arc, and come through in the clutch; only fitting for someone who can deliver so many gifts in a single night! Elves Boom and Shaka – both much shorter in stature than the towering Kris Kringle – have very different ratings. Shaka can dribble and shoot, while Boom is a Spud Webb-style high flyer. They’re a fun extra in an arcade title like NBA Jam.

In NBA Live and NBA 2K, the holiday season has also meant additional content such as festive player clothing in the career modes, special packs, cards, and challenges in Ultimate Team and MyTEAM, and gifts in the form of Locker Codes and other such giveaways. Putting aside a bungled situation with a Pink Diamond LeBron James card last year, it’s been a time of fun, generosity and goodwill on the virtual hardwood, though admittedly also a way of generating recurrent revenue with seasonal content. NBA 2K Playgrounds 2 also added a Christmas-themed Playground and outfits in Patch 1.04. The latter are only available in premium packs, however. (Bah! Humbug!)

The holidays can be as stressful as they are joyful, and while many of us do enjoy the festive season, for others it’s a difficult time. I’m therefore taking the opportunity to send out good wishes to everyone. I hope you’re enjoying the holiday season, and that if times are tough, good things are right around the corner. Enjoy the festivities, and hitting up the virtual hardwood if you feel so inclined today. From jerseys and special presentation to secret characters and gifted content, basketball video games have a way of putting us in the Christmas spirit. Be safe, happy, and healthy, and thanks for going Wayback with me throughout 2019! More retro fun is coming in 2020.