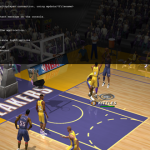 As I noted in my aforementioned article on NBA Live 2003’s dev console, it couldn’t be accessed by default. Gaining access to the console command line required a config file to be edited, specifically xstartup.cfg, located in the cscripts folder. After opening the file in an application such as Notepad, we had to find the line // bind +K_TILDE CONSOLE, and remove the preceding forward slashes. This enabled the console to be opened using the tilde key, a common keyboard binding that a lot of games with a debug interface use. Once we open up the dev console in NBA Live 2003, we’re able to manipulate the game with a variety of commands. 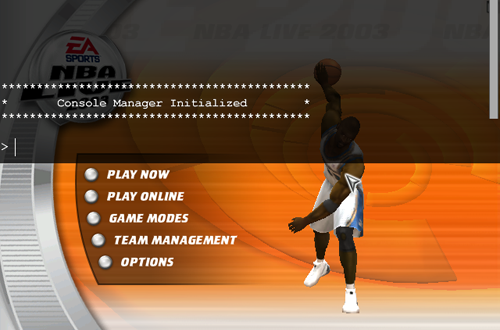 Of course, no one is going to automatically know what all the valid commands are, and even the developers probably needed a reference to be readily available. As such, typing in cmdlist will display a list of all the commands that can be entered into the console. Similarly, typing varlist will display a list of all the variables for an easy reference on what can be manipulated by entering different values. As you’d expect, there are the standard debugging and troubleshooting functions, including the ability to display information such as the current frame rate. It can also be used to manually perform functions such as taking a screenshot or exiting the game.

However, one of the more interesting and fun uses of the dev console is the ability to enable and disable various visual elements. This includes overlays and the scoreboard, which you might want to remove in order to feel like you’re watching the game from the stands rather than on TV. If you’re after a more realistic TV-style presentation, it’s also possible to disable the player indicators. If you want to make the game extremely challenging, you can even disable the basketball and the players themselves! They’ll still be there, just invisible. It’s certainly quite amusing to see a basketball bouncing up court and moving back and forth unaided, before shooting itself at the basket.

For the end user, some of these commands admittedly don’t have much use outside of doing something silly with the game, though the fun that can be had there still makes them interesting in their own right. The ability to enable and disable the various visual elements was obviously more useful for the developers when it came to testing NBA Live 2003 or getting preview screenshots, but to that latter point, it’s something that we probably could’ve made better use of as well. Even though the screenshot function in Instant Replay was sufficient for most mod previews and the like, we could have utilised the console to get some really cool screenshots. 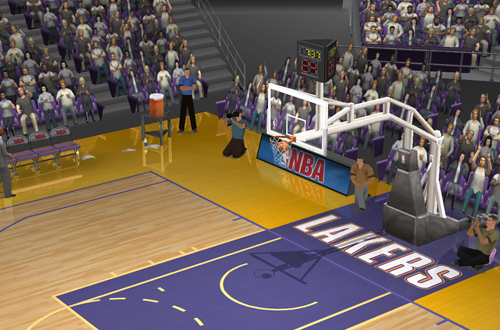 Had video content been as popular and easy to produce back then, I have a feeling that the dev console would’ve been put to good use to get gameplay footage without certain visual elements, such as player indicators and the scoreboard. Modern games include options to turn some of those features on and off, but I imagine we’d still find a use for a developer/debug console today. Unfortunately, we haven’t had access to one for a long time now. The dev console was also accessible in NBA Live 2004, but despite apparently being enabled by default in the configuration files for NBA Live 2005 onwards, pressing the tilde key has no effect.

Exploring the list of commands and variables, there are some other interesting things that can be done with the dev console. The debug camera command locks the camera in place and even overrides the cutscene camera angles, instead showing them from the current gameplay camera. It’s possible to change the speed at which dornas scroll, and how the coaches move up and down the sidelines. Various lighting effects can also be modified, changing up the game’s overall aesthetic. Unfortunately any changes to lighting need to be input manually each time, so as far as I can tell, there’s no way to distribute them as an easy-to-use modded file. Still, it is possible to make tweaks.

Interestingly, there’s also a value for “cross sell” with the various other EA Sports titles. Presumably, this refers to the ability to unlock content through the presence of a save file from other games in the 2003 season range. The feature was a forerunner to the EA Sports Bio introduced in NBA Live 2004, but as far as I’m aware, it wasn’t available in the PC releases. After all, when you look at those variables in the console, they all have a default value of 1. This suggests that all of that content is unlocked by default, with no other games being required. It also suggests that the feature likely had originally been planned for the PC releases, but was ultimately scrapped. 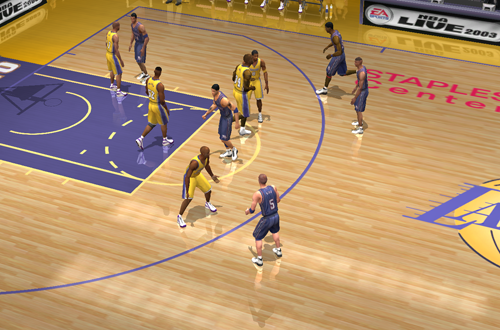 Digging through the commands and variables and seeing what could be done, it does leave me wondering why we didn’t explore the dev console further back then. We did know of its existence, but not many people talked about it or experimented with it, myself included. My guess is that we were simply focused on adding new art assets and trying to improve the gameplay with tweaked rosters; efforts that aren’t aided by any functionality within the dev console. Considering that our community would go on to create lighting mods, however, it’s interesting that we didn’t tinker more often using the console in NBA Live 2003.

If you’re in the mood to not only dust off and play an old favourite but also tinker with it as well, give the console in NBA Live 2003 and NBA Live 2004 a try. As I said, it can set up quite a challenge if you make the players or the ball invisible. At the very least, you’ll probably get some amusement out of messing around with the variables and making the game look as weird and wacky as possible. And hey, if you discover something nifty, feel free to post about it! We may be well past NBA Live 2003 being relevant and popular to play, but it never hurts to expand our knowledge of old hoops games. You never know what may breathe new life into an old release!

For a glimpse of the dev console in action, check out this video!