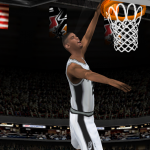 This is Wayback Wednesday, your midweek blast from the past! In this feature, we dig into the archives, look back at the history of basketball gaming, and indulge in some nostalgia. Check in every Wednesday for retrospectives and other features on older versions of NBA Live, NBA 2K, and old school basketball video games in general. You’ll also find old NLSC editorials re-published with added commentary, and other flashback content. This week, I’m taking a look back at Direct Shoot, which I believe is an overlooked gameplay mechanic in older NBA Live titles.

If you’ve played any of the early NBA Live games, you’ll likely remember a feature called Direct Pass. Even if you’re unfamiliar with those old releases, you can probably glean from the name alone that Direct Pass is what has come to be known as Icon Passing. NBA 2K popularised the latter name, though I still tend to use the terms “Direct Pass” or “direct passing”, because it’s the nomenclature from the games that I grew up playing. It’s the same reason that I use the name “Decade All-Stars” more often than “All-Decade Teams”. It’s just the branding that I’m used to.

While the name Direct Pass has fallen out of vogue, the concept is obviously still used in modern titles, without any major changes. Conversely, Direct Shoot – introduced in the NBA Live series around the same time as Direct Pass – has been replaced by other methods of advanced shooting controls. To that end, I’d suggest that it’s an overlooked stepping stone to mechanics that we now take for granted. I know that I’ve certainly underutilised it when playing those older games, so let’s take a look back…way back…

Direct Shoot made its debut in NBA Live 98, where it was labelled “Dunking” on the in-game control configuration screen. It worked in much the same way as the Direct Pass control, or its defensive/off-ball equivalent, Direct Switch. Just as those controls turned action buttons/keys into separate pass/switch controls corresponding to each player, Direct Shoot expanded the array of action buttons/keys to provide manual control over the type of shot a player attempted. We can draw comparisons to modern shooting controls and their modifiers here, but the concept and input method of Direct Shoot was also similar to that of Freestyle Superstars, i.e. a trigger plus a face button. 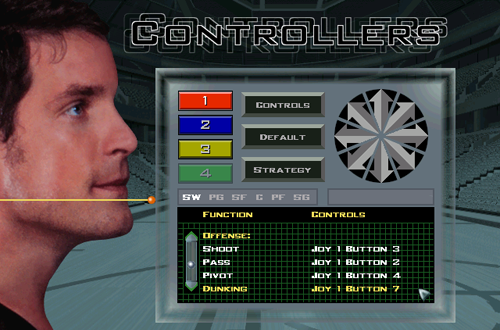 The main difference between the two is that Freestyle Superstars was also intended to represent signature moves and differing levels of player abilities. Animation packages aside, Direct Shoot worked the same way for all players. It simply forced players to perform a dunk or layup (and later, a hook shot) if they were within the appropriate range. There were no special or signature moves that were more effective; the player just performed the type of shot you wanted, as long as it was feasible to do so. If a player was too far away from the basket, they would simply take a jumpshot, or in later games, a running floater. Specific dunks and layups were still chosen at random.

This wasn’t the first example of expanded shooting controls in basketball games, or even EA’s hoops series. NBA Live’s forerunner, the NBA Playoffs series, featured signature move buttons with names such as “Marquee Shot”, and sometimes even separate buttons for stationary and moving jumpshots. These disappeared in the early NBA Live games however, and wouldn’t return until the implementation of Direct Shoot, where the functionality was far more generic. Although Direct Shoot lacked the flair of Marquee Shots or Freestyle Superstars, and certainly the depth of modern shooting controls, it’s actually effective when you go back and play those old titles.

What’s strange is that while I was aware of Direct Shoot and noticed the functionality whenever I was configuring the controls, it’s not something that I remember taking advantage of in those games. I’m sure that many of my fellow long-time basketball gamers did, but I don’t think I’m alone in underutilising the mechanic, because it’s not something that I recall being discussed or suggested very often. The signature move buttons in the NBA Playoffs series are remembered with nostalgia, and we recall the inroads that Freestyle Superstars made into deeper controls and player differentiation. Direct Shoot feels like an overlooked innovation that came between those mechanics. 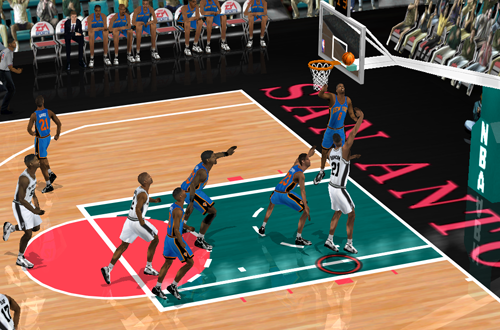 Looking back, I think I can explain why I, and most likely a number of other gamers, neglected these shooting controls. First of all, in the heat of the moment, it’s easy to overlook advanced moves and simple strategies alike. If you’ve ever had your shot swatted inside because you didn’t think to throw an up-fake first, or placed trust in the contextual animation logic on your attempt, I’m sure that you can relate. To that latter point, the second reason is that even in the 90s, games were improving when it came to contextually appropriate animations. If you wanted to perform a dunk, layup, hook, or runner, the Shoot button and your position on the court usually did the trick.

Of course, this wasn’t always the case. Those old games tended to be unforgiving in some of their animation selections, especially if you weren’t pixel perfect in your positioning. Instead of taking it up strong with a dunk, your player would perform a layup that was blocked. Similarly, instead of a more elusive layup or hook shot, simply pressing Shoot might just trigger a jumpshot while driving the lane, or making a post move. Even if the attempt went in, it didn’t look good or feel right. Beginning in the early to mid 2000s, NBA Live titles greatly improved in the area of contextual animations. However, Direct Shoot did give us some measure of control over shots.

At the same time, there were issues that Direct Shoot couldn’t overcome. The trigger zone for dunks and layups was smaller and tougher to gauge, so even when you use Direct Shoot, you can find yourself pulling up for a jumpshot or performing a runner if you’re just a smidge too far from the basket. Ironically, more recent games have had the opposite problem, where attempts to pull up for jumpers in the midrange trigger driving moves. There was also a far more limited selection of moves that could be performed in the paint, and while you could choose the shot type, the animation the game chose may still not be appropriate. Mind you, that remains an issue even today. 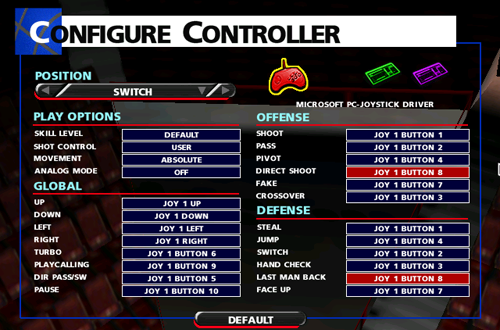 I can’t say that ignoring Direct Shoot stood in the way of hours of enjoyment with those older games, or prevented me from being successful in them. As with modern titles, they were designed in such a way that you could still win if you entrusted your shots to contextual animations and played smart basketball (or utilised exploits, as the case may be). It adds a new dimension to those old games when you go back and play them today however, because it’s depth and strategy that you didn’t realise was there. Old games can play very differently when you try out underutilised controls, employ counterintuitive strategies such as not jumping for rebounds, or even run more plays.

In that sense, it reminds me of going back to old platform games that I grew up with, and finding them easier now that I’m capable of playing them more patiently and strategically instead of trying to brute force them. I’m also reminded of the times I’ve fired up Where in the World is Carmen Sandiego?, and found it much easier now that I know more history and geography than I did when I was much younger, as well as immediately understand some of the more esoteric clues (or, you know, just Google them). There are many reasons that I enjoy retro gaming, and trying out new strategies and checking out things that I missed the first time around are two major incentives.

Even without the depth of modern shooting controls, it’s amazing how different those old NBA Live games feel when you trigger a dunk or layup on cue, or force a hook. On top of the satisfaction of throwing it down on the defense, it drastically reduces the number of times you’ll end up performing an awkward leaner instead of a dunk or layup. Again, you can succeed and get plenty of dunks if you just turbo to the hoop with the Shoot button, but Direct Shoot left less to chance. It’s weird that I didn’t make more use of it back in the day, but once again, what I was doing was still working and allowing me to win. As such, I felt no need to develop any new strategies and habits. 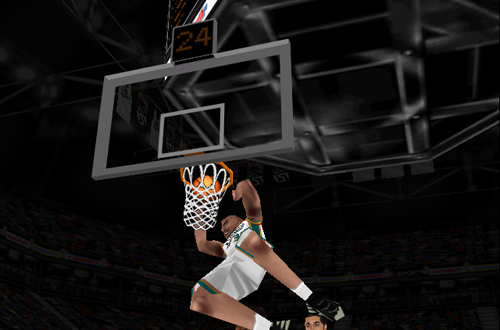 Reflecting on Direct Shoot led me to wonder about some of the other controls and mechanics that I’ve overlooked in older titles. Another mechanic that debuted in NBA Live 98 was the Drive button, which as the name would imply, was used to drive between defenders. It’s not necessary in order to get to the bucket for a dunk or layup, but it does help when knifing into the lane, and is especially effective when combined with Direct Shoot. It was short-lived, being replaced in NBA Live 99 with a button that performed different fakes. Interestingly, NBA Action 98 – the forerunner to NBA 2K that was released as NBA Fast Break ’98 on PlayStation – also had a Drive button.

By the PlayStation 2 version of NBA Live 2002, Direct Shoot had itself been phased out. It was becoming easier to trigger dunks and layups in the paint, and there were simpler methods of allowing gamers to shoot hook shots on command. Future games would find other ways to expand control over shot attempts, from the aforementioned Freestyle Superstars to the Shot/Pro Stick in NBA 2K. Nevertheless, it’s interesting to go back to old games and see those early attempts at deeper offensive controls. Some of them were quite effective for the time, and laid the groundwork for more advanced mechanics. If you’re playing those old games, I recommend giving Direct Shoot a try.