Wayback Wednesday: A Look Back at DSTATS in NBA Live 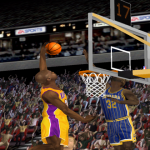 This is Wayback Wednesday, your midweek blast from the past! In this feature, we dig into the archives, look back at the history of basketball gaming, and indulge in some nostalgia. Check in every Wednesday for retrospectives and other features on older versions of NBA Live, NBA 2K, and old school basketball video games in general. You’ll also find old NLSC editorials re-published with added commentary, and other flashback content. This week, I’m taking a look back at DSTATS in old NBA Live games.

For an enthusiastic franchise mode gamer, detail is paramount. On top of having a quality gameplay experience throughout the schedule, our enjoyment of a franchise mode is driven by the depth of the features, as well as the accuracy and realism of trades, free agency, and player performance. Simulated player stats that are wildly inaccurate can really detract from the franchise experience, especially during the first couple of seasons which are usually expected to somewhat resemble reality. The sim engine is an area where basketball games have greatly improved over the years, but in earlier NBA Live titles, realistic stats were achieved through the use of DSTATS.

DSTATS data provided the development team and modders alike with greater control over simulated player stats, but the approach also had a few noteworthy drawbacks. It’s an outmoded concept, but one that’s interesting to revisit, so let’s take a look back…way back…

Open up one of the players.dbf files from a PC version of NBA Live, and you’ll find a bunch of statistics fields towards the end of each row. These include statistics from the previous season and Playoffs, and fields to record the statistics from the season and Playoffs that you’re currently playing through. From NBA Live 99 through NBA Live 2003, you’d also find statistics fields that provide a baseline for a player’s simulated performance. The names of these fields of example statistics were preceded by the letter D – generally thought to stand for “development” or “determined” – which led to them being collectively referred to as DSTATS. It wasn’t the first time that player data in NBA Live had included example statistics for simulated performance. If you use Brien’s editor to open up the executable file for NBA Live 95 PC, you’ll find that players have a pointer to “fake stats”, which the tool also allows you to modify. They were basically projected numbers for rookies like Grant Hill, as well as players who missed the entire 1994 season, such as Tim Hardaway. Otherwise, simulated performance was simply determined by the previous season statistics. In NBA Live 96 through NBA Live 98, stats were determined by the previous year’s numbers if they were available and player ratings if they weren’t.

The implementation of DSTATS in NBA Live 99 allowed for a much more precise method of determining simulated statistics. While players who were missing DSTATS would still have their simulated statistics dictated by their ratings, DBF editing allowed DSTATS data to be entered or modified as needed. Whether it was an original player, a player added by one of the game’s two official roster updates, or a new player that we created ourselves, we had control over the kind of numbers they’d put up in simulated games. With DSTATS, the results were consistent, so there were generally fewer worries about unusual or undesirable statistical performances.

However, the consistency of DSTATS was also one of the drawbacks of the method. The numbers that were entered for a player’s DSTATS were what you could expect them to produce year in and year out, which meant that performance didn’t really fluctuate with a player’s development or decline. Even as star players declined, they could continue to put up big numbers, as long as their overall rating was high enough to keep them in the starting lineup. Rising stars were also prone to having their performance capped a little low, as DSTATS didn’t account for their blossoming talents, or new place in the pecking order.

Another problem with the DSTATS method is that a simple and easily overlooked error could produce wildly inaccurate results. As I’ve previously discussed, the first official roster update for NBA Live 99 provides a prime example of this, with Brad Miller’s DSTATS erroneously having him shoot 42-for-53 from three-point range. Even though such mistakes could be easily corrected – EA Sports did fix that particular error in the game’s second official roster – DSTATS could still be undesirably restrictive. The results were usually fine for at least a couple of seasons, and of course they could be updated, but it wasn’t a perfect solution. To that end, some gamers felt it made more sense to remove DSTATS data altogether. In order to speed up that process, Lutz created a tool that automatically removed the DSTATS for all players in a roster. While this left player performance at the mercy of the sim engine’s handling of player ratings, it also allowed for more dynamic results. As a player’s ratings improved or declined, their simulated performance was affected accordingly. There was merit to both methods, so it really came down to personal preference, as well as tolerance for the oddities and inaccuracies that would come with each approach to generating player statistics.

With NBA Live 2004 revamping Franchise Mode into Dynasty Mode, the developers also saw fit to remove DSTATS from the players.dbf file. The decision was made in order to properly account for player improvement and decline, and adjustments were made to the sim engine accordingly. The results weren’t always perfect, but they were generally realistic and mostly satisfactory. As was the case when DSTATS were removed from previous titles, simulated performance was now more dynamic, and in tune with player ratings. Subsequent releases continued to generate player statistics according to ratings, rather than relying on fixed example numbers.

DSTATS aren’t a desirable solution these days, and even in their time, they did have their drawbacks. The idea wasn’t without merit though, and for the first few seasons in Franchise Mode, they would generally produce realistic results. They could obviously be edited which provided us with some control over the results they produced, a handy option when making current and retro rosters alike. It’s definitely not a method that future games should utilise, but at the time, it was a viable solution; a reasonably effective and functional stopgap while further enhancements were made to the logic of NBA Live’s sim engine.