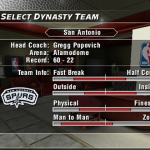 This is Wayback Wednesday, your midweek blast from the past! In this feature, we dig into the archives, look back at the history of basketball gaming, and indulge in some nostalgia. Check in every Wednesday for retrospectives and other features on older versions of NBA Live, NBA 2K, and old school basketball video games in general. You’ll also find old NLSC editorials re-published with added commentary, and other flashback content. This week, my retrospective on franchise modes continues with a look back at the history of Dynasty Mode in NBA Live.

Franchise Mode was one of the best additions in the NBA Live series, delivering a multiseason experience that gamers had been wanting for some time. By NBA Live 2003 however, it was unfortunately getting stale. Despite a few noteworthy new features and AI enhancements, the experience hadn’t become much deeper over the course of four years. Franchise gamers still enjoyed the mode and it remained popular, but there was also a certain amount of frustration, as we wanted to see more innovation. Fortunately, by the time NBA Live 2004 rolled around, EA Sports were ready to deliver.

The introduction of Dynasty Mode in NBA Live 2004 was part of an effort to rebrand Franchise Mode throughout all EA Sports titles, but thankfully, it turned out to be much more than a name change. It marked the introduction of a deeper mode that continued to evolve through the years, until it too fell on some rough times. Let’s take a look back…way back…

It’s fair to say that the introduction of Dynasty Mode marked a renewal of EA Sports’ commitment to the franchise experience in NBA Live 2004. There was a determined effort to make the mode deeper and more engaging, and replicate all facets of being an NBA GM and coach throughout multiple seasons. One drawback to EA revamping the mode, however, was the removal of the ability to select multiple teams. The concept of Dynasty Mode became focused on running one team, which did prove to be off-putting to gamers who wanted to manage the entire league, or play the mode with their friends. To this day, NBA Live lacks multiplayer in its franchise mode. Apart from that, the familiar core features remained. The new Dynasty Mode still offered multiseason play with free agency, trades, generated players and the rookie Draft, as well as player evolution. On top of that, new features and functionality were added. It was now possible to trade picks in the upcoming Draft. An interest meter on the trade screen indicated which players a CPU-controlled team was most interested in acquiring, which factored into your ability to complete a deal. Training camp and training sessions allowed you to develop your players on top of the year-to-year progression, and nominate the aspects of their game that you wanted to focus upon.

A feature that resonated with a lot of gamers was the cutscenes. Events such as drafting, trading for, or re-signing a player, a player’s retirement, training sessions, and the end of year award presentations, would all trigger cutscenes that added to the presentation and immersion. To date, NBA Live 2004 is the only game in the series to feature those cutscenes. It also introduced Dynasty Points, which were earned by accomplishing in-game statistical tasks. Points could be used to buy Dynasty Extras such as training sessions during the season, and amenities that provided ratings boosts for either a set number of games or the entire year.

All of these additions made Dynasty Mode a lot of fun, and were very refreshing after the stagnation of Franchise Mode. The lack of multiplayer and the inability to customise the league beyond a fantasy draft were unfortunate, but ultimately didn’t stand in the way of most gamers enjoying what Dynasty Mode had to offer. There was obviously a lot more that could be done to make the franchise experience even deeper, but it was a pleasing amount of innovation in the space of a year. It was around this time that story threads began to take off in our Forum, which should be an indication of how passionate we were about Dynasty Mode.

Of course, there were some problematic issues. As I’ve mentioned in previous articles, assigning less than 25% of the training time to a particular area actually ran the risk of causing players to decline. This meant that it was sometimes safer to skip training camp altogether, or at least assign 25% of the time to each area, which avoided players declining but also meant that there was virtually no chance of them improving. Free agency could be a little buggy, with high-rated players refusing to re-sign, and then failing to latch on elsewhere. These issues were annoying and there was still room for improvement, but all in all, the future of the mode did look bright. Fortunately, we wouldn’t see a repeat of what happened with Franchise Mode, as Dynasty Mode did get better over the next few years. NBA Live 2005 was the first game to include real player salaries, adding authenticity that was lacking in the old Salary Points approach. The new All-Star Weekend was incorporated, a few bugs were addressed, and player contracts could be front or back-loaded. Sim Intervention allowed gamers to jump in midway through a game that was being simulated, which was extremely useful. The PDA was also introduced, though this admittedly had mixed results due to the approach having some cumbersome elements.

The PDA remained a part of the Dynasty Mode interface on PC and PlayStation 2 through to NBA Live 09. It was functional and didn’t ruin the overall experience, but it was impossible to negotiate trades in real time, as you needed to advance a couple of days to get an answer. Additionally, some of the messages came across as being rather nagging. Another big change in NBA Live 2005 was the generation of the upcoming Draft Class during the current season. This meant that you could scout rookie ratings all year long, and then work out with them in one-on-one games before the Draft during the offseason, which was now calendar based (though still in stages).

NBA Live 06 did away with Dynasty Points and Extras in favour of introducing team staff, which also meant that training sessions no longer had to be purchased. Before each season, you were presented with a budget and could hire assistant coaches, trainers, and scouts. Staff members, all of whom were fictional, had different ratings that determined how good they were at their job. NBA Live 07 added an assistant head coach who could help plan the new off-day events, as well as investigate the rumour mill. NBA Live 08 added Dynasty Scenarios, which added the ability to intervene in a simulated game when presented with different gameplay scenarios.

Simulated stats are always a point of interest for franchise gamers, and through the years, Dynasty Mode had its ups and downs. With the removal of DSTATS in NBA Live 2004, the sim engine produced some decent results, depending on the game in question. Unfortunately, the sim engine was broken in NBA Live 08 PC, resulting in some wildly incorrect statistics. NBA Live 07 and 08 also replaced the traditional lineup screen with a rotation menu that was clunky and didn’t work nearly as well. As the previous gen version of NBA Live (from which the PC version was ported) became an afterthought, more cracks began to appear in Dynasty Mode. More attention was being paid to Dynasty Mode in the PlayStation 3 and Xbox 360 versions of NBA Live however, and that resulted in the “push” approach. In a nutshell, gamers were presented with more information and tasks without having to go digging through all the menus. New elements such as a free agent negotiation mini-game, where players had to be sold on your team before talking dollars, were introduced. Games were now also simulated play-by-play, meaning that you could intervene at any point, and there were more Dynasty Scenarios as a result. Certain GM tasks could also be automated, if you wanted to streamline the experience.

Training improved immensely with the introduction of the Academy in NBA Live 09. Not only could you choose the area of focus, but you could also participate in the specific drills that potentially increased your players’ ratings. The Academy carried over to NBA Live 10, but there were issues with drills not having an impact, and certain offensive ratings not having any drills associated with them at all. Simulated stats also left something to be desired. Many basketball gamers still enjoyed it for what it was, and it was definitely still very playable, but the overall quality of Dynasty Mode was unquestionably slipping once again.

With the rise of online gaming and the single player career experience becoming the mode of choice, franchise modes – while still popular and enjoyed – are no longer the priority they once were. While NBA 2K has remained committed to delivering a quality franchise experience, it has been an afterthought in NBA Live for some time. Dynasty Mode in NBA Live 14 through NBA Live 16 has been very bare bones, and NBA Live 18’s rebranded Franchise mode has made some changes that I for one am definitely not a fan of. It’s a shame to see, and I hope that the trend changes, because there was a time that NBA Live was being very innovative with Dynasty Mode.

As such, it’s worth reflecting upon all that Dynasty Mode achieved during that era. I’ve had some of my favourite basketball gaming experiences with Dynasty Mode over the years, and I know that a lot of other long-time hoops gamers can say the same. It picked up where Franchise Mode left off, and introduced many of the concepts that we take for granted these days. NBA Live wasn’t the only game catering to franchise gamers with a quality experience – and we’ll get to that soon – but the best iterations of Dynasty Mode certainly hold their own against their contemporaries. In their day, they undoubtedly provided many of us with a lot of fond memories.

I still remember the first time I saw cutscenes in nba live 2004. I also like how your draft pick was always shown walking up to the stage.

They were great! I hope it’s something EA considers bringing back, upon revamping the current mode.