Wayback Wednesday: A Mistake Unnoticed in Over 20 Years 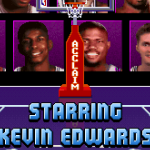 This is Wayback Wednesday, your midweek blast from the past! In this feature, we dig into the archives, look back at the history of basketball gaming, and indulge in some nostalgia. Check in every Wednesday for retrospectives and other features on older versions of NBA Live, NBA 2K, and old school basketball video games in general. You’ll also find old NLSC editorials re-published with added commentary, and other flashback content. This week, I’m taking a look back at a mistake in the PC version of NBA Jam Tournament Edition that I haven’t noticed in over twenty years.

As I’ve mentioned on several occasions, NBA Jam Tournament Edition is one of my all-time favourite basketball games. While I own the game on both Super Nintendo and PC, I’ve always been partial to the latter. It’s the version that I played the most, and I have many fond memories of playing the game with my cousin. One school holidays, we spent a lot of time playing with and against every single team, beating everyone to unlock all the secret players, and challenging ourselves to hit statistical milestones. For a while, it was a fixture of our basketball gaming rotation.

That’s why it’s so strange that I’ve never noticed a certain mistake in the game in over twenty years of playing it. While playing as the New Jersey Nets for the No Threes Challenge, I noticed that Kevin Edwards actually has Blue Edwards’ portrait. I knew about both players and what they looked like, basically from the time I started playing NBA Jam TE, so it’s really odd that it’s never clicked until now. I thought that I’d see if I could delve into the issue further, so let’s take a look back…way back… 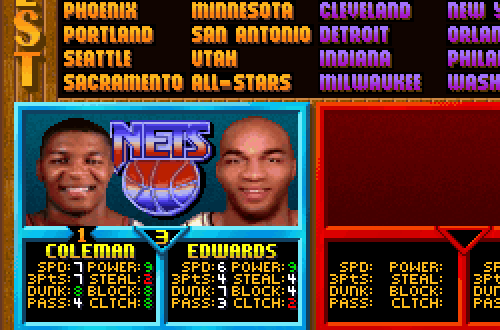 Delving into the situation further, The Cutting Room Floor’s entry on the prototype version of NBA Jam TE for the Super Nintendo provides an interesting revelation. In this early build of the game, Kevin Edwards did indeed have Blue Edwards’ portrait, a mistake that was corrected in the home release. Blue Edwards was on the Bucks in the arcade version of NBA Jam Tournament Edition, but not featured in the home release. It can be assumed that he was replaced by Kevin Edwards when updating the rosters, in order to reuse the “Edwards” text strings and audio. Interestingly, although Kevin’s ratings seem more appropriate for Blue, they aren’t Blue’s ratings erroneously reused.

Given how players were swapped, added, and removed between all of the different arcade revisions and home releases, it wouldn’t have been surprising if that had been the case, especially as a few such errors did slip through. For example, in at least one arcade revision, Robert Horry is on the Pistons, while Sean Elliott is on the Rockets; the result of a trade that was ultimately rescinded in real life. However, although their heads and ratings were swapped, they still have each other’s portraits. Errors like that are easy enough to make, and since patches and roster updates were not feasible back then, each arcade revision and home version was stuck with them when they occurred.

Getting back to Kevin Edwards, although he does have the wrong portrait on PC, he is correctly listed as “Kevin Edwards” during the attract mode screen. He does uses Blue Edwards’ head during gameplay though, so basically Blue is in Kevin’s place on the Nets’ roster, with ratings meant for Kevin that are – oddly enough – more suitable for him. It leads me to believe that despite the PC version’s later release, the developers were working from a much older version, perhaps even the aforementioned prototype. They’ve added new players and updated team logos, but somehow missed out on other fixes and updates that were implemented in the SNES release. 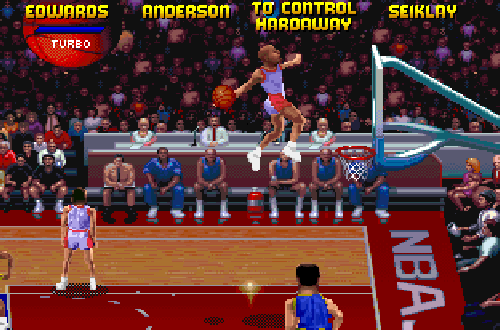 It’s very odd to say the least, but what’s really strange is that I never noticed until now. I have vague memories of noticing the portrait being different when I compared the PC and SNES versions of the game, but I guess I didn’t pay close enough attention to realise that it was a mistake; not just a different portrait, but the portrait of a different player entirely! I never gave much thought to his odd ratings, either. With quite a few players being underrated or overrated in NBA Jam TE, I probably assumed he was yet another example, or just didn’t care enough about him. Actually, when it came to the Nets, I’d say I was having too much fun unlocking and dominating with Yinka Dare!

After discovering this mistake and being so surprised that I’d never noticed it before, I started to wonder if it was somehow a by-product of playing the game in DOSBox. While that may sound absurd, I have noticed a few oddities when playing certain other games under the otherwise reliable DOS emulator. One example would be the “No Portrait Available” graphic in NBA Live 96. Even though I chose English as the language during installation, the German graphic is used instead. As such, I wondered if DOSBox was somehow triggering access to dummied-out content in NBA Jam TE. Unlikely, but it would explain how I could have overlooked such an obvious mistake.

To be absolutely certain, I fired up an old computer and ran the game under DOS. The mistake was there. Clearly I had indeed overlooked it for all these years, though to be fair, the original oversight is on the developers. Of course, in those days it was quite common for different teams to work on each version, so it’s possible that the accurate portrait for Kevin Edwards didn’t make it to the PC crew. Wondering if any other players also had incorrect portraits, I combed through the expanded rosters. None of them do, although Dennis Rodman does still have his old portrait from the prototype, in which his hair is black rather than recoloured to be bleached white. 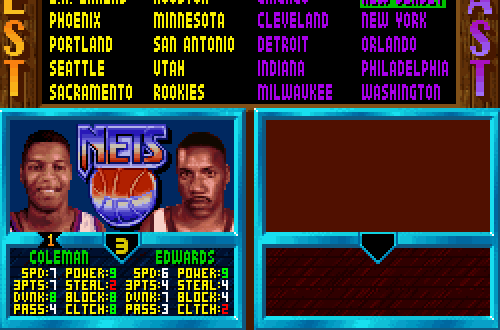 This is a further clue that strongly suggests that the PC team were working with some old assets, and possibly even an older build of the game. In fact, that might explain why the PC version is somewhat buggy, with strange behaviour such as deflections that seem to happen without anyone touching the ball. It accounts for trades that took place before the 1995 lockout went into effect, and includes new logos for the 1996 season, so modifications were made and assets were added, but clearly some of the updates and polish from the SNES version were left out. In that respect, it’s fair to say that the PC version is both more up to date and less up to date than the other releases.

Honestly, that just makes it more interesting to me. Surprised though I am that I did overlook this mistake for over two decades, it was cool to finally notice it, and delve into the issue with a few pointers from The Cutting Room Floor. It’s why I really enjoy going back and looking at old favourites for Wayback Wednesday; whether it’s an aspect of the gameplay, a nifty feature, or a mistake like this one, there’s always a chance that you’ll discover something you never noticed before. Who knows, I might even finally find the serial number to install the screensaver that came bundled with the PC version of NBA Jam TE! Alright, I’m not holding my breath on that one.